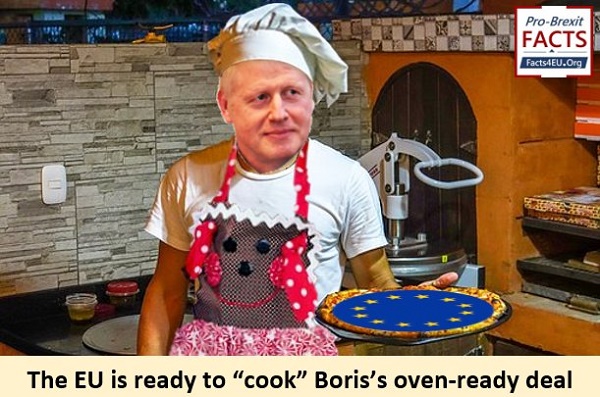 Congratulations to Boris Johnson come from Brussels, but with strict cooking instructions

While the United Kingdom was focused on the General Election this week, the EU’s top body – the EU Council of the leaders of each country - has spent two days at its December summit in Brussels, with no UK representative present.

At this summit, the EU27 leaders discussed Boris Johnson’s victory and the future of Brexit.

What did the EU Council say about Brexit following Boris Johnson’s overwhelming victory?

Key excerpts from the official EU Conclusions of the Summit, Fri 13 Dec 2019

“1. The European Council reiterates its commitment to an orderly withdrawal on the basis of the Withdrawal Agreement and calls for its timely ratification and effective implementation.”

“2. The European Council reconfirms its desire to establish as close as possible a future relationship with the UK in line with the Political Declaration and respecting the previously agreed European Council’s guidelines, as well as statements and declarations, notably those of 25 November 2018. The future relationship will have to be based on a balance of rights and obligations and ensure a level playing field.”

“4. The European Council welcomes the Commission’s decision to reappoint Michel Barnier for the negotiations on the future relationship.”

Readers will note that the EU specifically insisted that the United Kingdom must respect “guidelines, statements and declarations” from November 2018. These refer to Theresa May’s disastrous Withdrawal Agreement, rejected by the House of Commons three times earlier this year.

“The time-frame ahead of us is very challenging. We are going to have to get to work as soon as possible.

“We will have to prioritize, prioritize insofar as we will put specific focus on those issues at an economic cliff-edge at the end of 2020 if they would not be done.

“These are issues where we have neither an international framework to fall back on nor the possibility to take unilateral contingency measures covering the period after the 1st of January 2021. So there will be sequencing.”

Many other EU leaders referred to the need to ensure “a level playing field” and to keep the UK as “closely aligned” to EU laws and regulations as possible.

It is clear to us that the EU is delighted that their one-sided Withdrawal Agreement is now almost certain to pass through the House of Commons in the coming weeks.

If the EU is urging that this agreement be signed as soon as possible, readers may be certain that they see it as being a win for the EU.

TOMORROW we will be looking at the prospects for Brexit, now that a majority Conservative government has been elected.

Analysis of the election results from a Brexit point of view

The official, full, and detailed list of the results from each constituency is not yet available. As soon as it is, we will bring readers our usual analysis and original insight. As ever this is almost certain to contain facts you will not read elsewhere.

Finally, and very reluctantly, we believe that a significant pro-Brexit effort from several organisations will be required to ensure that a true Brexit is now delivered. If there is support for this, we will continue. If there isn’t, then we can’t. If you can help with a donation, the quick and secure links are below. Thank you.

[ Sources: EU Council | EU Commission ] Politicians and journalists can contact us for details, as ever.

From the wording and that ominous phrase 'level playing field' the Commissions approach to Brexit has not changed (nor that of the BBC).
It does not look as though 2020 will see our future relationship with the EU settled amicably.
Boris Johnson has a wonderful 80 MP majority to push the legislation through Parliament. In his breaching the red wall the people have demanded the UK becomes a fully free and independent Nation again, not ruled from Brussels. The PM must not let the people down, by a large majority they have said 'Get Brexit Done NOW'.
Johnson will have to be firm with the EU, he has the strength now to take the NO DEAL exit path if necessary.
The SNP may rant and rave, but how do they propose to rejoin the EU when England has left. Will they expect the EU to fund their £941 million income tax shortfall.

I am surprised tbp didn't win a single seat.but they certainly contributed to getting rid of Mrs may,getting bojo in and forcing a revised withdrawal agreement. Remainers are already saying bojo can now have a softer brexit,that's what they hope for.I say now he can go much harder and deliver our true exit from the EU. What type of colours will Mr Johnson show us!

Praise where praise is due.
DT: I have revelled in the sheer horror of the Westminster Remainer elite by Nigel Farage.
Lots of plaudits in the comments for the Politician who has never become an MP, yet has shaken Parliament to its roots.

The EU of course like their 'withdrawal agreement' written in Brussels - so you can bet your last penny that it is injurious to the UK.
To focus; No-one voted for a 'withdrawal agreement' in 2016 nor any sort of 'deal' - we voted to leave - OUT of anything to do with the EU and the little EUers and into the world as a free, self governing, independent nation.

@paul a 4. Yes totally agree. Its great lots of ghastly remainers have been removed.thank you to the people who would normally vote lab,who now voted Tory. This is great courage and shows them all that we mean business. Come on bojo! Be our Churchill!

In an article in the Guardian (the Remainers journal) it is written: FARAGE WON IT FOR BORIS

@ sydney6. That's great but can you try and copy the links to your great finds please.

My finds in the news come from Brexit central, their daily Brexit News.
The Independent quotes Dominic Cummings: “After the shock of the referendum, MPs and journalists should have taken a deep breath and had a lot of self-reflection of why they misunderstood what was going on in the country, but instead a lot of people just doubled down on their own ideas and f***** it up even more".
“That’s why something like this happens against expectations.
“All these better than average educated Remainer campaigner types who have waved around for eight weeks, for the last four months and didn’t understand what was going on and didn’t understand they were driving everyone mad."
“MPs need to reflect, the media needs to reflect, and they need to realise that the conversations they have in London are a million miles away from reality.”
Note leavers also have better than average educated supporters.

The level playing field requirements are nothing new. If the UK does not accept them, fine. The consequence is no trade deal with the EU. This is not a choice for the EU, but the only option, seen all the agreements they have on trade both internally and externally, which was clearly shown in Barnier’s famous slide.

We can now expect the woke lefty remainer crowd to get all outraged at how bad the WA that the Tories have negotiated for us. They will have a point, but in their self righteous, self indulgent outrage, they will totally ignore that they bear a large part of the responsibility for the poor outcome for the country that the WA is. The big well funded remain campaigns, the activists on social media, serving and ex remainer politicians trotting over the channel for cozy chats with Barnier all gave encouragement to the Establishment and Theresa May that they could get away with making the outcome so bad that we would be demanding a second referendum and that is exactly where we were heading. What they didn't count on was the return of Farage! Had he stayed in the States doing warm up gigs for Trump, we would have just voted in a 2nd Referendum rather than a GE. So with the WA, we are where we are. I think that Boris did well given the constraints that time and worst parliament in living memory placed on him, but it remains a poor deal. The woke lefty remainer crowd will reveal their breathless hypocrisy when they attack it...