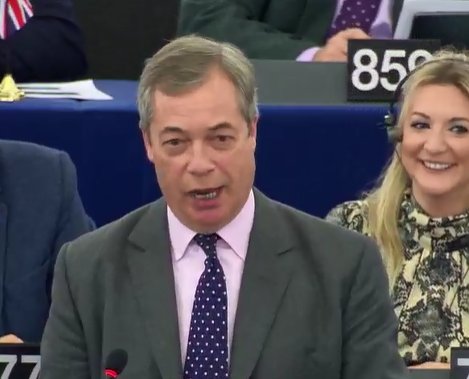 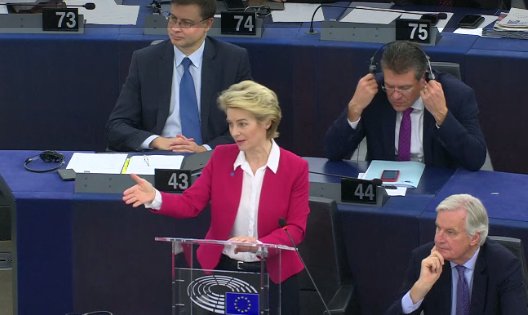 Another Brexit Facts4EU.Org factual account which the BBC will not report

Yesterday in Strasbourg at the final week’s plenary session of 2019, Frau Ursula von der Leyen thanked God for the departure of MEPs from the party which won the EU elections in the UK and which produced the largest number of MEPs of any party in the EU Parliament – the Brexit Party.

Final excerpts from speech by President von der Leyen in the Plenary of the European Parliament, 18 Dec 2019

In a wide-ranging speech to the assembled MEPs from the EU28 countries, the new EU Commission President concluded by thanking “our very brave [British] Remain MEPs”, looking over to the area where the British minority parties (Cons, Lab, LibDems, Green) sit. She told them “I am sorry. We will miss you, we will miss you, thank you for your courage. Thank you for having been at our side.” Prolonged applause rang out from around the enormous hall, with the only protest coming from Brexit Party MEPs.

When the applause died down, Frau von der Leyen turned her attention to the Brexit Party’s MEPs.

“We will never miss those who scream and yell.” At this point she pointed at the Brexit Party MEPs, with more applause from MEPs. “And now, thanks God without you, we are constructing our future partnership to the UK.”

The reaction from the Brexit Party

Early this morning Brexit Facts4EU.Org spoke exclusively to two MEPs who were outraged by the EU Commission President's comments yesterday. Here is what they told us.

The reaction from British Leave MEPs

“The arrogance of an unelected EU bureaucrat is astonishing. Von der Leyen is not only insulting the biggest single party group in parliament, she is insulting 17.4 million British people and their right to have their vote respected. I thank von der Leyen and many of her colleagues for providing a constant reminder of why we voted to leave in the first place!”

“The Brexit Party MEPs have repeatedly punctured the Zeppelin-sized self importance of the European Parliament with gusto. Naturally this has not made us popular with the self-important and deluded advocates of "ever more union" but we shall wear their discomfort as badges of honour and shall continue our sallies right up until 31st January. Merry Brexmas to all!”

- Brian Monteith, MEP for the North-East and Chief Whip of the Brexit Party

Frau von der Leyen was speaking at the EU Parliament, but she is not an elected MEP. She is a glorified civil servant. She was parachuted into her role at the last minute, one month late, when the EU Council could not agree on any other candidates for the role.

She was the only candidate presented to the MEPs and yet despite this she only succeeded in being approved by a majority of only nine votes out of 750. An election with only one candidate to vote for is more akin to Chinese, Russian, or North Korean ideas of democracy than to a Western organisation which proclaims to hold the values it does.

She then attacked the Leave MEPs who won the EU elections in May of this year, and who had more MEPs than any other single party in the EU28. The United Kingdom’s electorate is larger than that of 15 EU countries COMBINED.

We continue to be non-partisan, but if anyone from the United Kingdom is brave it is someone who stands as a Leave MEP, not Remain.

Frau von der Leyen seems to have forgotten that she is no longer an elected German politician. As EU Commission President she is there to manage the EU affairs of the 28 EU countries, not to make party-political statements.

We suggest that Frau von der Leyen respects the UK as a full member of the EU, as well as respecting the majority verdict of the British people about the EU, if she wishes UK taxpayers to continue paying her enormous salary.

[ Sources: EU Parliament and EU Commission ] Politicians and journalists can contact us for details, as ever.

What she really means is that God those MEP's are leaving finally as she wants to get on creating their God-forsaken utopian communist hell. Something she is welcome to as such hells never last.

Great article as always. Why do the BBC never publish anything about the EU parliament? The new EU President shows her contempt for all Leave voters in the UK as represented by Leave MEPs in the EU parliament. No-one is surprised I'm sure but you published it which is more than the BBC ever does!

The BBC Sam (2) is part of the problem along with Channel 4 (also somewhat propped up by subsidy). Cannot wait to see either the license fee scrapped or under threat of that the BBC cutting channels/removing repeats/ concentrating on good programming, something they should have started long ago, as their standards are appalling now. No longer is the BBC the beacon of freedom in our increasingly socialist nightmare of a world.

"Sturgeon sends Boris letter demanding independence despite admitting there’s NOT majority"
God help Scotland, in or without our United Kingdom.

A speech so full of politically correct jargon beloved by the modern day politician.
'With the European Green Deal, we aim at a growth model that gives back to our planet more than it takes away from it'.
Why has COP 25 just collapsed in acrimony in Madrid.
A group of 500 prominent scientists and professionals, led by the CLINTEL co-founder Guus Berkhout, has sent a registered letter to the Secretary-General of the UN, António Guterres. They warn the Secretary-General that “Current climate policies pointlessly and grievously undermine the economic system, putting lives at risk in countries denied access to affordable, reliable electrical energy.”
They add: “We urge you to follow a climate policy based on sound science, realistic economics and genuine concern for those harmed by costly but unnecessary attempts at mitigation.”
The consequences to people living in European countries will be disastrous after the EU Parliament declared "Climate Emergency" in its session on 28 November 2019, believes Dr. Waheed Uddin, a professor, consultant, former UN expert. According to the expert, the EU parliament decision wasn't unanimous, as about 34 percent of votes were against the Climate Emergency declaration. He also noted that EU parliament chief Ursula Von der Leyen's intent to spend half of the annual EU budget (more than $11 billion) on renewables replacing fossil fuel would cost more than $1 trillion by 2030.
At a press conference last Wednesday, the European Parliament was told: ‘There is no climate emergency.’ The event was hosted by the European Conservatives and Reformists (ECR) group in the European Parliament who had agreed to receive the climate declaration from Professor Guus Berkhout.
A question for anyone reading this, do the IPCC know the mathematical sensitivity of the atmosphere to CO2 by equation/formula.

Well said Henrik and Brian.
Where will we hear these voices after they stop being MEPs on 31 January?

Sam #2
My understanding is the BBC receives funding from the EU so they will do as they told by the EU.

Back to the 1970s with all its economic problems we go . The Common Market was initiated to ensure that never again would there be war between European countries squeezed dry by greedy bankers etc. Unity was the answer so that screaming dictators would never again profit from financial ruin. Say no more ?

Not to worry its just a blimp , but Hopefully a clue for the rest of the E U countries that at times dont agree with what is the laws and rules sent out to them, BUT MUST BE CARRIED BECAUSE THE E U COMMISION HAS SAID SO.