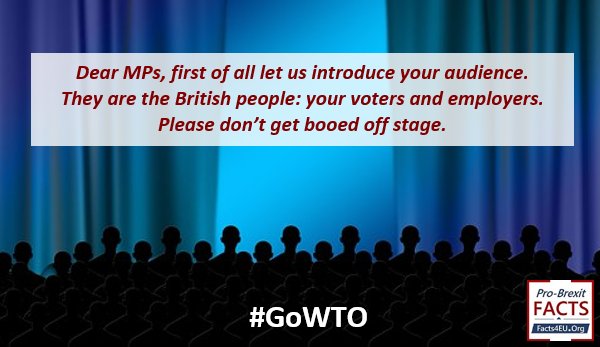 Can anyone bear to watch?

Today in the majority Remain Parliament, anti-democratic MPs will once again debate a range of motions designed to thwart Brexit.

The likelihood is that they will gain a majority for one of their Remain options. This could then lead to a motion on Wednesday which the Remain Speaker could allow to become binding on the Government, by changing the rules again.

At the same time, the Government is again looking for ways to have a fourth vote on its atrocious surrender treaty known as the Withdrawal Agreement and Political Declaration.

The Remain MPs are voting based on ignorance

One of the worst aspects of this charade is that most MPs haven’t got a clue when it comes to the EU. They simply don’t know the facts.

They are lobbied by big business, which has a vested financial interest in Remain, by unions who still seem to think workers’ rights come from the EU, and by a variety of clueless Establishment worthies and celebrities who think the EU is all about peace and loving each other.

Whatever happened to deciding based on the facts?

For all of the above we can provide detailed evidence from the EU itself.

On a daily basis for more than three years, we have researched and published detailed evidence of all of the above, as well as detailed articles on hundreds of individual areas of concern.

The vast majority of this evidence comes from official EU sources and is incontrovertible. It all supports Brexit – unless you have no interest in facts.

If our MPs don’t care for fact-based decisions, what purpose do they serve?

As the majority of MPs seem to have no knowledge of – nor interest in – the facts, then surely we might as well ask our pets and children to make decisions?

They could hardly do any worse.

I will be watching, through my fingers, with gritted teeth and trying not to throw a brick through the television and with profanities in my head, not shouted.
Please can these MPS, for once tell me why no deal will be a disaster. You know: evidence and facts.
The automotive industry will lose thousands of jobs in the event of no deal. Anna Soubry, tell me WHY. I know your OPINION, now tell me what your opinion is based on.
No facts, no evidence, no truth.
The truth is there is no POSITIVE case to be made for remaining in the EU, today or tomorrow. The facts PROVE that. Disagree? Then REFUTE, with evidence, not OPINIONS.

I shudder at what happens today, but look on the bright side this April Fools Day.
If Theresa May had had her way we would have today entered an unknown period of BONDAGE to the EU under the WA. What could be worse than that.
Labour, possibly unwittingly have prevented it.

I cannot resist it.
Bumbling Boris has joined April Fools Day in the DT.
I am lost as to what he proposes to implement Brexit.

Just in case anyone's bothered, the 3 petitions relating to EU withdrawal are being debated today in Westminster Hall at 4pm - (including the revoke Art 50 one which now has eleventy squillion signatories).
It will be interesting to see if more than 50 attend . . . and that's including the politicions
REPLY FROM BREXIT FACTS4EU.ORG - We understand that many readers want us to promote these petitions. Unfortunately, as we have said many times, they achieve nothing. They are NOT debated in the main Chamber and very few MPs attend. They do NOT affect MPs' views, sadly. This is why we have promoted other and more effective ways of influencing MPs, such as our latest "ballot box" initiative, which threatens to vote them out of a job at the next election.

MPs represent communities from around the country. You say they don't know about the EU but they've been debating it during the last 3 years. They might actually know a lot more than you think. Once again you provided no facts.
REPLY FROM BREXIT FACTS4EU.ORG - 'Scientist', we don't recall a single fact you have posted on here.
Our Brexit Index contains over 1,100 articles containing thousands of facts researched from the EU. Each week we publish many articles with facts from the EU itself. As a scientist, you might wish to educate yourself and then try to refute our facts if you can. No-one has been able to in the last three years, but please give it your best shot. We believe in free speech, but as a scientist we would have thought you would have been interested in evidence to support your views.

Scientist, please share the sources that have formed your opinion.
I'm guessing The Guardian, The New European, James O'Brian on LBC,and the BBC. In the last GE you voted Liberal Democrats and on your Facebook page you describe yourself as a citizen of the world. At College you studied Media Studies.
Your age, I think is 25-35 and you've never worked abroad.

Steve Baker is saying that if May loses MV4 and there is a Vote of No Confidence, he is prepared to vote with Labour to bring down the Government.
Good man.
A General Election is the only way out of this, since it will shift the balance of Leave/Remain much closer to the Referendum result.