Is the EU now finally on the slide and going downhill?

It seems so, judging by the official photo of von der Leyen’s ‘State of the Union’ speech 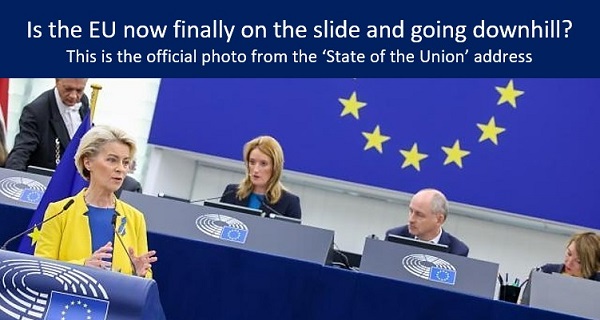 Yesterday, so unremarkable was it that even the avidly pro-EU Politico news site made it their eighth story – and that article mostly contained charts of how many times certain words appeared.

British readers might be interested to hear that the death of our beloved Monarch finally got a mention. This is the first time we have seen this in any official press release since her passing one week ago. (We don’t count a tweet from someone in the EU Commission President’s office as being an official statement.)

Other than that, von der Leyen’s speech was mostly about Ukraine, Russia, and the resultant energy crisis. Those who are fighting for their country and their lives on the frontline will no doubt be reassured to learn that the EU Commission is looking to remove international mobile roaming charges for Ukrainians.

Possibly the only section of interest was the part of the speech where Frau von der Leyen admitted that the EU Commission had been asleep at the wheel for years over Putin’s Russia. She did not phrase it quite like that, naturally.

Here is what she actually said :-

“One lesson from this war is we should have listened to those who know Putin. To Anna Politkovskaya and all the Russian journalists who exposed the crimes, and paid the ultimate price. To our friends in Ukraine, Moldova, Georgia, and to the opposition in Belarus.

“We should have listened to the voices inside our Union – in Poland, in the Baltics, and all across Central and Eastern Europe. They have been telling us for years that Putin would not stop. And they acted accordingly.

“We have to get rid of this dependency all over Europe.” 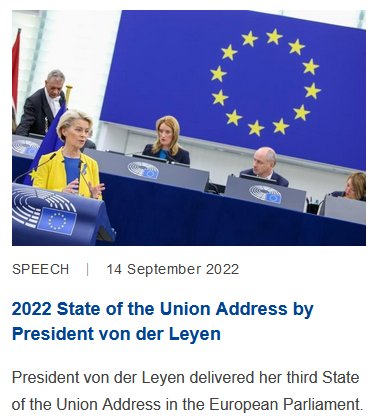 ‘Unity’ and ‘solidarity’ in a divided EU

There were naturally many mentions of unity and solidarity, without which no EU Commission speech would be complete.

This happened on the same day – to cite just one example – that EU Commission officials leaked plans to suspend EU budget funds to Hungary, and the day after they officially announced action being taken against Slovakia over financial regulations.

In addition there were some Pravda-style comments about proposed new EU Commission initiatives. The disputes with the UK - the EU’s second-largest export market - were not mentioned. Readers can read the entire speech here.

Perhaps the staff in the EU Commission’s press office agree with us that their President’s State of the Union address was so boring they needed to jazz it up with a ‘dynamic’ photo. In so doing of course, they gave us our headline.

We await in eager anticipation for the day when the EU Commission President will announce :-

“Comrades, I am pleased to tell you that tractor production is up once again and targets for the five-plan have been met.”

Politico also had a nasty hatchet piece on Charles:
The King must expect a viscious, gathering attack on his person, in an attempt to unseat the Royal Family in the esteem of the nation and an attempt to destabilise the Union.
This is not just petty nastiness and jealousy: both China and the EU, have designs to move in on the Commonwealth.
If Charles has a mission, let it be welding CANZUK and the Commonwealth together: the attacks by our enemies have already started.

What a sad state.
Just as we all knew, A farcical talking shop spending other people's money, Badly.
The days are certainly numbered.

Let’s not forget that VdL was Merkels Defence Minister for many years and managed to turn the Bundeswehr from mediocre to junk status which obviously did not go unnoticed in Moscow!

No mention of the proposed energy transfer to France at half price paid for by you guessed it, us paying twice as much.
They will continue against the king as he has shown interest in the ni protocol.
Too long have we propped up the French government at the expense of the British people. 49 trillion and counting, that's their pension deficit. One has to wonder why when Greece was debased for much lesser sums. A disgusting tax burden foisted upon this sceptered Isle to stop a humanitarian issue across the channel.