Boris Johnson commits to defend an area 3 times size of UK – anyone notice? 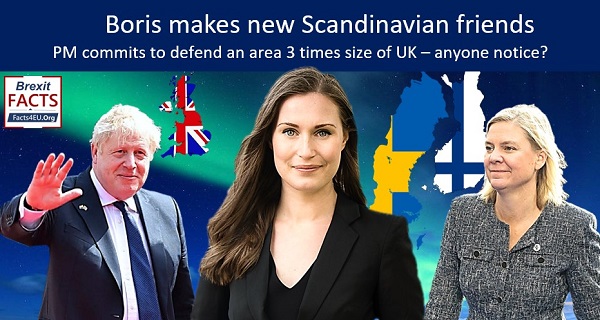 Nothing said in Parliament, nothing in the Queen’s Speech, so Facts4EU reveals the facts

On Wednesday 11 May 2022 the Prime Minister Boris Johnson flew to both Sweden and Finland and signed defence agreements which amount to a seismic shift in the UK’s foreign and defence policies and commitments.

The implications of the Prime Minister’s actions on Wednesday have barely made the radar in the United Kingdom, so Facts4EU.Org puts this right in our report today.

In effect the deals signed by the Prime Minister this week extend the defensive land border being protected by the UK against the Russian Federation by some 837 miles (1,347km) in the case of Finland.

The total combined area of land mass Boris Johnson agreed to defend on Wednesday is 304,538 square miles (130,678 sq miles for Finland and 173,860 sq miles for Sweden). This is more than three times the size of the entire United Kingdom. 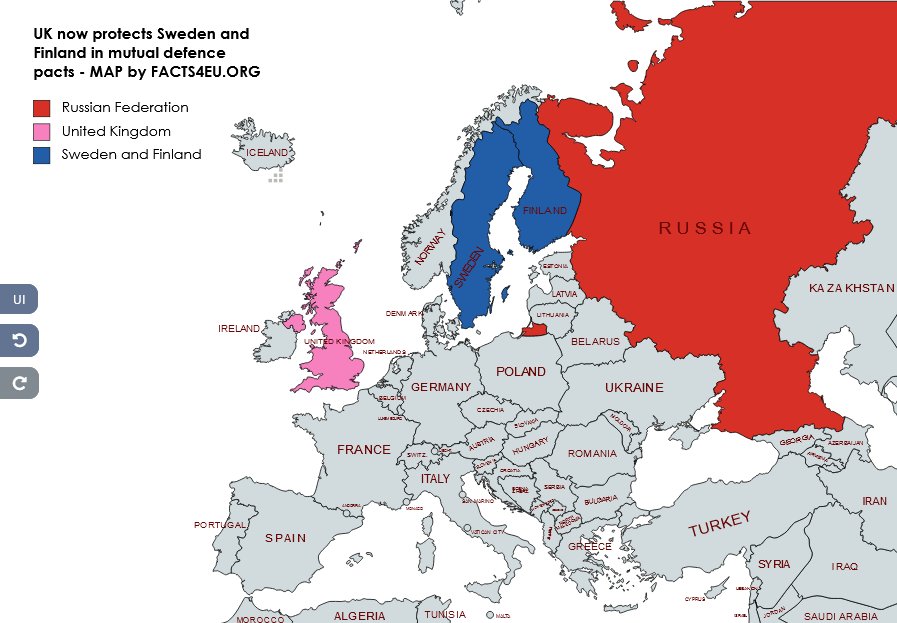 Sweden and Finland are both members of the European Union. However neither ever wished to join NATO, which has secured the peace for over 70 years. The United Kingdom has been the second-largest funder of NATO’s military capabilities in all that time, after the United States.

Following Russia’s illegal invasion of Ukraine, however, public opinion in both Sweden and Finland has shifted. Suddenly both countries wish to join NATO now. The process of accession to NATO takes time, however. The agreement of some 30 parliaments is required and the process is likely to take up to a year. 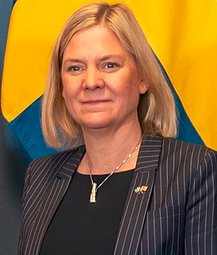 It is against this background that the PM paid a flying visit to both Sweden and Finland on Wednesday, meeting their respective female prime ministers.

In what was clearly a pre-planned arrangement, Boris Johnson agreed what amounts to the equivalent of NATO’s Article 5 – “an attack on one is an attack on all” 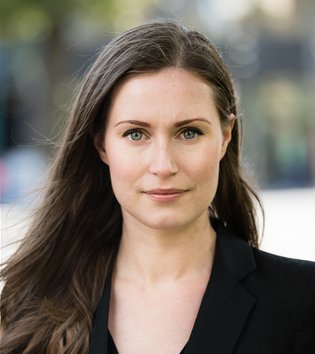 Facts4EU.Org has been unable to find any prior mention of this possibility in Parliament, nor in the Queen’s Speech two days earlier. Nor were we able to find the text of the mutual defence pact in Hansard nor in any Government announcements.

Fortunately, the Scandinavian governments were more forthcoming and we now have a copy of the agreement with Sweden. We are happy to provide this to Members of Parliament on request.

The agreements signed by the Prime Minister this week are described as “mutual security assurances declarations”. Whilst these fall short of being international treaties, they nevertheless make political commitments to defend each other’s countries on a bilateral basis.

Here is an excerpt from the Swedish document:-

“Should either country suffer a disaster or an attack, the United Kingdom and Sweden will, upon request from the affected country, assist each other in a variety of ways, which may include military means.”

In a statement from No.10 came the following:-

“Visiting Harpsund, the Swedish Prime Minister’s country residence, and Helsinki, the Prime Minister will set out the UK’s intention to support the two nations’ armed forces should either face crisis or come under attack.”

Later the PM gave a press conference in Finland, where he made it clear that this is not a short-term arrangement while Sweden and Finland accede to NATO membership, but a permanent commitment.

“From the High North to the Baltics and beyond, our armed forces will train, operate, and exercise together - marrying our defence and security capabilities and formalising a pledge that we will always come to one another’s aid.

“Because this is not a short term stop gap as you consider NATO membership, but an enduring assurance between our two nations.” 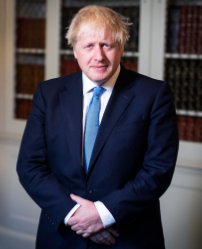 Few readers will argue that the UK should not support friendly countries such as Sweden and Finland in the event they are attacked. It is also the case that British forces have trained with Swedish and Finnish forces for many years.

There is, however, a difference between friendliness and making a permanent mutual security declaration in writing. This may be a political declaration rather than a treaty, but it is a commitment and it has the Prime Minister’s signature on it.

We find it somewhat surprising that no questions about this matter have been asked in Parliament. Perhaps if more MPs were interested in serious national commitments being entered into, and less in political point-scoring over Partygate, Beergate, and Brexitgate, we might see some serious scrutiny.

Where are the protests about 'Parliamentary sovereignty' now?

For many years after the the EU Referendum in 2016, resulting in the largest democratic vote in British history, a great many British Parliamentarians fought tooth and nail to overturn the people's decision, up to and including the Hilary Benn 'Surrender Act'.

This Act effectively tied both hands behind Lord Frost's back in his final negotiations with the EU. In turn this led to the appalling EU Withdrawal Agreement and its even more disastrous Northern Ireland Protocol.

These MPs were not shy in shouting about the supremacy of Parliament and they used the courts on several occasions to thwart the Government in delivering a true Brexit. Yet when the British Prime Minister enters into two bilateral pacts with EU countries - with absolutely no involvement from the House of Commons, they have fallen silent.

We agree the United Kingdom should stand by its friends in Sweden and Finland. We are just a little surprised that none of the MPs who were up in arms about every attempt by Mr Johnson's Government to deliver Brexit have had nothing to say about Parliament's lack of information on what amounts to a major commitment by the UK to two EU countries.

When PM May was trying to deliver Brexit … she had no majority in parliament and opposition MPs had a field day. Now the Conservative party has a big majority. Was fact4eu expecting Conservative MPs raising objections to the alliance between the UK and Finland and Sweden?

Yet Johnson's Conservative in name only Government is contemplating defence cuts idiotic in this day and age Johnson needs to cut loose Sunak as it is Sunak who is being obstinate John Redwood would be the ideal next Chancellor, Johnson and Truss need to stand up to Biden and some meddling American senators where to get off

Look at this from the Russian point of view. They worked for a century, and fought two wars, to impose neutrality on Finland, which reduced the length of their Western frontier needing defence by 800 miles. Now that 800 miles of frontier with Finland has become active again. That isn't a war-winner, but it is a strategic problem for Russia.

Elected UK members of parliament presently sitting in the House of Commons should remember their electorate sent them there, and can remove them just as easily come next elections. Bluntly, MP's work for us and not the other way around.
Our PM appears to have forgotten his primary duty is to serve all citizens of the United Kingdom, and he should not allow foreign politicians to interfere with UK domestic issues.
We have a cost of living crisis just now as do other countries, and we understand why. So one might think he should be protecting British taxpayers hard earned cash - not handing it out to foreign countries in one form or another, or spending on stupid projects.
From a military point of view, our PM SHOULD ensure UK borders are properly policed, and if anyone attempts to illegally enter the UK, they should be kicked out on the next available plane.
We should also take a very firm stance on illegal channel migrants by towing them straight back to French shores. Macron will huff and puff, but its not a UK problem that EU shores are so porous, or they allow free movement across EU member countries. We cannot watch as illegal migrants are escorted by a French military vessel into UK waters.
If Boris can't protect our shores now, think what would happen if war came to our shores! We have no idea who crosses the channel illegally and it must be stopped.

Is this the same Sweden where their pm is now saying that their mass immigration hasn’t worked and has divided their population, hopefully he takes note of that too!

To go to such lengths. It's almost as if he feels personally responsible for their present plight in some way.

4. Oh no - your guy went off script? Again? It would have been handy to think of that before your vote.
He had a verifiable propensity for making things up, even his lines for school plays were conjured from thin air. What did you expect? He has had much practice.
Conservatives did the same thing voting in Trump. Party before country. Same results.
Once, an event - twice a trend.