Is overcrowding in the EU a reason why almost 6 million moved to the UK?

An exclusive report from Facts4EU.Org of the overcrowding in EU homes 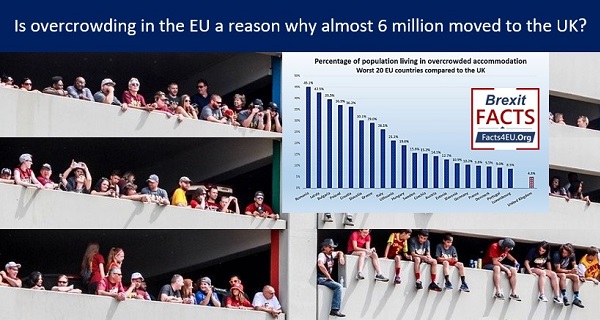 At its most basic level, the “European Projekt” is an attempt to take hundreds of millions of people from different countries - with different traditions, lifestyles, cultures, religions, economies, and standards of living – and ram them into one model called ‘the Federal States of Europe’.

Over the years the Facts4EU.Org team has shown just how wide are the disparities between the lives of the peoples of the 27 nations that currently make up the EU. Our reports have included everything from the staggering differences in pay levels, to access to the internet.

Why is “people per room” important?

The number of people living per room is a fundamental measure of the quality of people’s lives. It could also be argued that it has been one of the motivators for those in many EU countries to have left their own countries to seek a better life in the United Kingdom.

To date, we know that 5.8 million EU citizens have done so on a permanent basis, according to the latest Home Office figures for the ‘EU Settlement Scheme’ which the UK Government signed up to as part of the EU Withdrawal Agreement.

So, what’s it like in some EU countries, compared to the UK?

Facts4EU.Org has analysed the latest figures available from the EU’s official statistics agency, which relate to 2020.

As a comparison, we have also included the last available figure from that agency in respect of the UK, which is from 2018.

The percentage of each country's population living in overcrowded accommodation 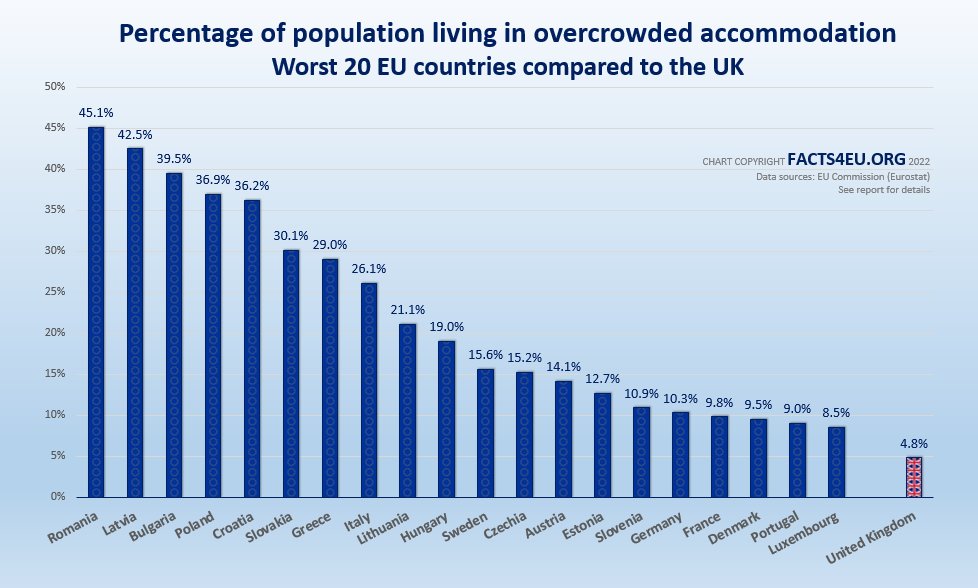 The correlation between EU household overcrowding and immigration into the UK

Six out of the EU’s 10 worst countries for household overcrowding are in the Top 10 nationalities to have permanently settled in the United Kingdom.

Indeed 13 out of the EU’s 20 worst countries for household overcrowding are in the Top 20 nationalities to have moved to the UK. The EU27's average is 17.5%. That's over 3.5 times that in the United Kingdom.

In Romania, almost half the population is living in overcrowded accommodation. This is despite the fact that more than 1 million Romanians have moved and permanently settled in the UK.

How is “overcrowding” officially defined?

Like most readers, the Facts4EU.Org team all love Europe. We love its rich variety, its peoples, and its cultures. We also believe in European countries trading freely – with the current exception of Russia.

However when it comes to a supranational unelected body attempting to curtail this diversity and put it into a box marked “EU”, we draw a line.

In our report above we have once again shown how the EU’s 27 member counries are vastly different. In this case we looked at how people live in their own homes.

If the EU were a trading bloc, as it was orginally sold to the British people back in 1972 before we joined on 01 Jan 1973, the lifestyles of peoples within that bloc would be their own concern. Unfortunately the original ‘EEC’ or ‘Common Market’ very soon became something different. One of those differences was called ‘Freedom of Movement’.

We now know that at least 5.8 million EU27 citizens took advantage of this to settle in the UK, with all the toll this has taken on our public services. There is no question that they have contributed in a great many ways to our economy. The problem has been that successive governments have simply failed to invest in the services required to cater for a population that has risen by 10% in such a short time, as a result of EU immigration.

The UK is attractive to migrants for all kinds of reasons, and for most of those reasons we should all be proud. Our report above merely provides yet one more example of why many EU citizens might have chosen to make the United Kingdom their home.

[ Sources: EU Commission (Eurostat) | The UK Home Office ] Politicians and journalists can contact us for details, as ever.

On the question of six million moving to the UK, I am sure someone will trot out the old "No, they didn't, they just filled in the forms" line. If someone does make that claim, I would like to ask two questions. First, to get residence in the UK, you had to show physical presence in each of the previous five years. If you didn't really want to live in the UK after all, why would you have gone to that amount of trouble to qualify? Second, if the six million did not really move to the UK, why was there all that fuss about their "rights". Why did the EU and its Remainer supporters make such a todo about the right of EU citizens to live in the UK if EU citizens did not want to live in the UK?

I would imagine it won’t be long before a lot of the U.K. is in a similar situation, with the cost of living skyrocketing etc

One thing worth considering is that the mix of people entering the UK from the EU should be beginning to change. Leave to remain depends on the five years before we left the EU, when anyone who wanted to could come from the EU. Now the mix of people entering the UK will be more like the previous mix from non-EU countries, where getting in means having to show that you have some prospect of employment.
Incidentally, I don't think inflation has anything to do with much of this. inflation in the UK is 9% versus 8.8% in the EU, so that is a quite marginal difference, and probably most people can't even tell you that, let alone plan on it.

How does a donation-driven, self-described "think tank ", which has selectively failed more than once to deliver half a page,
excluding the header, footer plus a donation nag, suddenly splurge out & go in depth on how the land expansion of the EU is
of no consequence as the combined GDP is still lower than ours, only to follow that up with how over-crowded they are & are fleeing here because of that.
If land expansion is really of no consequnce, then why stretch funds to write about it?
On the face of it, the 2 are not connected at all, but they're not.
I doubt that you're worried about the living arrangements of EU citizens, when ours are much worse.
We may have more rooms but they belong to a small, select group of people - with no land left to build on.
If you doubt that, try buying a house today.
All the fuss seems prohibitively expensive in time & effort just to say that they're an inclusive slum & we're an exclusive castle - with a moat.
I hear than from my local Tory bar-fly.
You should have just said "be afraid, be very afraid of the big red danger next door - they want what you have", while taking donations yourself & called it a day.
Fear of percieved loss is often the biggest voter motivator, as the Tories know.
All you've done is drawn attention to the fact that 6 million people might not be permanantly here, were it not due, in part, to your cheeleading outfit.
EU citizens were happy to roam, being bilinguial 'n all. They were not applying for residency/citizenship in numbers before you won the vote that forced them to.
Fear & a reluctance of learning languages is why many here never did the same - not a fear of shared housing in the EU.
Ask those who settled in enclaves dotted around the EU.