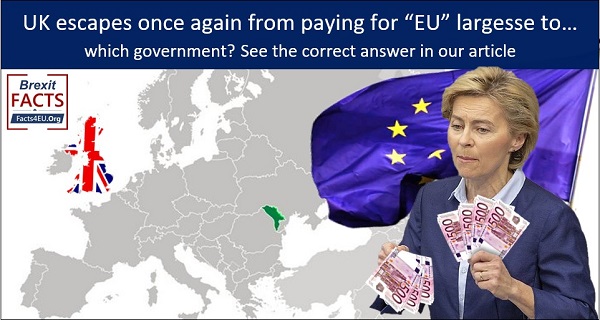 A small example of how British money was regularly used by the EU Commission, badged as ‘EU’ generosity

Have you heard of Moldova? Do you know where it is? Well, in recent years the EU has thrown hundreds of millions to Moldova in the form of grants and loans – money badged as “from the EU” but in reality funded to a significant degree by the unknowing generosity of the British public.

Last week the EU Commission in Brussels, led by Ursula von der Leyen, announced another tranche of money it proposes to provide to the Moldovan government.

This example is relatively small, but is an example of the regular use of UK funds for EU purposes

Every week for many years the Facts4EU.Org team has recorded announcements of ‘EU funding’ coming out of Brussels and going outside the EU. Sometimes these funds amounted to many billions. Sometimes they were ‘merely’ a few hundred million.

They all mounted up to many hundreds of billions of pounds. Below is just one small example from last week.

Small, but typical of so many

Last week, following a request by the Republic of Moldova, the European Commission adopted a proposal for a new Macro-Financial Assistance (MFA) operation of up to €150 million. This is on top of the EU Economic Recovery and Resilience Plan for Moldova of up to €600 million for the next three years – part of which will be paid by the British taxpayer as part of the ‘Divorce Bill’ which was agreed by Theresa May when she was still Prime Minister.

The latest decision from the EU Commission on funding for Moldova will not form part of the UK’s ‘Divorce Bill’, thanks to Brexit.

“The European Commission continues to stand by the people of Moldova in these particularly challenging times. Alongside the new IMF programme, this proposed new Macro-Financial Assistance would provide both grants and loans at favourable rates to help support the Moldovan economy in the coming two years.

“As ever, this financing would be conditional on the fulfilment of policy commitments aimed at addressing some of the most pressing problems weighing on Moldova's economic development.” 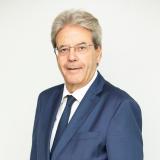 Moldova is being lined up for EU membership

Moldova sounds like the kind of invented country name from which a secret organisation of dastardly villains would set out to challenge Secret Agent 007.

It is in fact real and was part of the former Soviet Union. If its name sounds contrived that is possibly because it was only chosen in 1991 when it became independent. The Republic of Moldova is extremely poor, corrupt, and with democratic deficiencies.

Moldova is thus a perfect candidate for membership of the European Union. As part of this process it entered into an ‘Association Agreement’ with the EU which was signed on 27 June 2014 and entered fully into force on 1 July 2016.

The Republic of Moldova borders Romania, which joined the EU in 2007. It is therefore perfectly conceivable that the EU should wish to bring this new member’s neighbour into the orbit of the European Union.

Moldova also neighbours the Ukraine. Many blame the EU’s clumsy attempts at bringing Ukraine into its orbit, for Russia’s current conflict there. Moscow seized the Crimean peninsula back in 2014 and has been arming its rebels in Eastern Ukraine since then.

Moldova is one of the poorest countries in the world – certainly it's the poorest in Europe. It ranks 141st out of the 213 countries listed in the IMF’s GDP list for 2021. Above it in that table you will find economic powerhouses such as Nicaragua, the Congo, and Equatorial Guinea.

Yes, this is a relatively small expenditure by the EU in comparison to the billions it spends each year, but this latest disbursement is another in a long line.

Importantly it is now another payment which the British public will no longer have to subsidise.

There is a general misconception surrounding how much the UK used to pay to the EU – that it was a fixed amount relative to a formula based on economic performance, agricultural sector and other factors. The problem with this is that, well, it’s only part of the story, it’s not the whole truth.

The amount of treasure the UK (and other countries) handed over to Brussels was indeed calculated by a formula – but there were ALSO a series of add-ons, some of which might be known and predictable but were considered outside the annual payment, and others that were simply not known and planned for.

Add-ons could be projects outside the membership fee that were obligatory, such as Foreign Aid – usually given the progressive title ‘development aid’, although much of it did not go on or lead to any ‘development’ but found its way to dictatorships without any audit trail or accountability.

The funding of Moldova is an example of an additional commitment that the EU would regularly take on in support of its own agenda – this time in its craving for territorial gain to expand EU membership. It’s rather like the US buying Alaska from Russia for $7.2m in 1867 but not admitting it as the 49th State until 1959.

It is these sorts of additional expenses – many of which have little obvious geo-political or strategic interest for the UK – that we are now no longer committed to. They previously went unnoticed and unremarked. But the tab was still picked up by British taxpayers. In the scheme of things they may not have moved the UK’s deficit dial a great deal – but rolled-up together they sure did. And now we are shot of them. That’s what you call a Brexit Bonus and the type of commitment we should never go back to.

We researched and wrote the above piece while working on an important piece of research we will be publishing tomorrow. Watch this space!

[ Sources: EU Commission | IMF | UN ] Politicians and journalists can contact us for details, as ever.

But we ARE still paying them our "exit fee"...which we DIDN'T HAVE TO but for Boris the BETRAYER..

What a brainless Brexit buffoon Bogus. In this article is no common sense, no logics and the tiny parts of truth are twisted to suit the ideological demand of these Brexit charlatans. What a mess.

I see little difference between this and the Chinese belt and road initiative.

Lucky dragon, any actual point you wanted to make? No? What a surprise from a rejoiner :)))

Where does all this accession money go?
Where did all that accession money go that was given to Turkey?
https://www.eubulletin.com/...
“”The results of the audit will be released in the first half of 2018. “”
https://euobserver.com/fore...
Can’t find that report yet. Can you?
What about the monies for Turkey to cope with immigration/asylum seekers?
Eca.Europa.eu/en/ Pages/DocItem.aspx?did=47552
is not too flattering?

Addiction to "EU money" is a real thing. For example, Ireland will receive a €361m payout from the EU's €5.4bn Brexit compensation fund. But, first of all, Ireland only suffered economic harm from Brexit because of the way the EU insisted on negotiating the Brexit deal - a much better deal in which Ireland would have left the Single Market and preserved full access to the UK market was considered and rejected - and secondly, the EU Brexit fund isn't money, it's debt. The cash being given to Ireland and to other EU members affected by Brexit is actually a new debt floated by the ECB and for which member states will have to pay.
So the Irish taxpayer *thinks* that they are being given money, but in reality their future debt just went up, without their consent as voters, but with a requirement that the Irish Government guarantee in advance that it will use this money in ways that the EU approves of.
This is the inverse of sovereignty. It is when citizens find themselves with increased debt, without democratic control, and with a foreign agency asserting control of how they spend money that they themselves will have to pay back in future.
Oh, and the EU plans to do this on an even bigger scale - €500bn in stimulus funds - using the same model with the same EU supervision over spending, and our share of that would have been €90bn.

Collective security costs money. The alternative is to go solo & take your chances on your own. Good luck with that Brexiteers. I'm relatively young compared to most Brexiteers so will most likely see us re-enter civility in my lifetime, when we do vote back in, you'll have nothing to show for it but a wide waste of time.