With Germany now politically paralysed, who will direct the EU?

Plus, the impact of the largest EU economy’s power vacuum on Brexit Britain 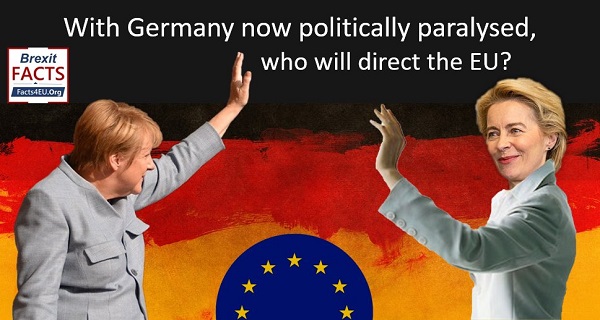 Yesterday, Sunday 26 Sept 2021, the second round of federal elections in Germany took place. This was supposed to decide who governs Germany in the post-Merkel era.

With Germany’s Chancellor of 16 years, Angela Merkel, having supposedly retired, the EU and the rest of the world must now wait to see who will replace her. So far we have two sides claiming victory simultaneously.

The ‘scores on the doors’

Due to the Byzantine complexity of the German electoral system it can take some time before the final results are calculated and declared. However, below we can show the latest official information from the German Federal Returning Officer, as at 6am UK time. We believe this to be the final result. 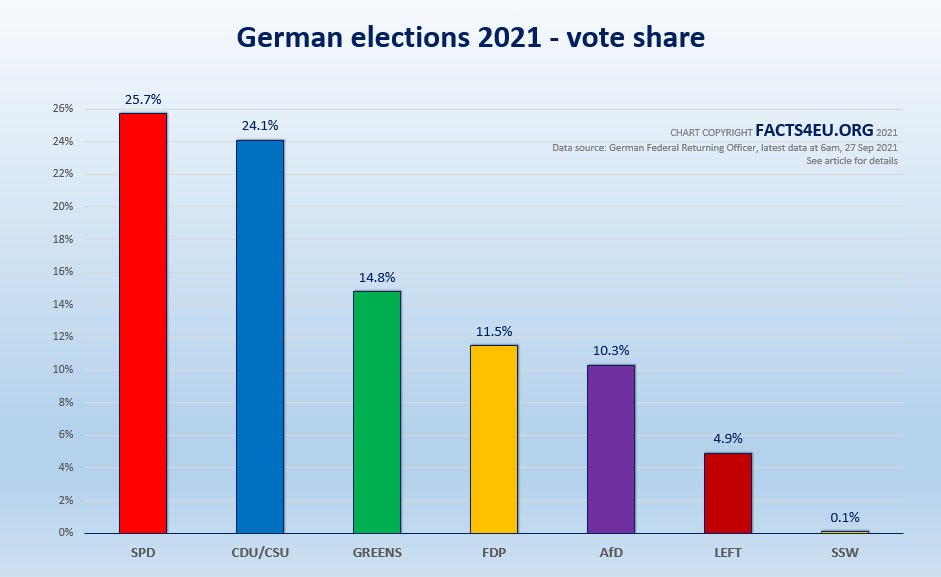 How do they count German votes?

The post Second World War voting system used in Germany is unique and must be one of the most complicated in the world. We suspect that summarising how it works would even challenge the skills of the UK’s most-respected psephologist, Professor Sir John Curtice.

In short, Germany’s is a proportional representation system on steroids and we do not propose to shorten your or our lives by attempting to describe it here. Germans argue that it produces the fairest result, while still accommodating a desire to produce a functioning government.

So, do we think we know who won?

Each now face the challenge of putting together a coalition government and this will happen regardless of the official result. There appear to be four possible combinations which would give a government a ruling majority in the Bundestag, involving up to four main parties. The two we have not mentioned so far are the Bündnis 90/Die Grünen (Greens) and the Freie Demokraten (FDP).

The process of building a coalition in the past has taken months and this time around is likely to be no different.

Who now runs Germany and what effect will the power vacuum have on the EU and the UK?

In theoretical terms the EU continues to speak to the UK Government with one voice – that of the EU Commission led by the Merkel protégé, Ursula von der Leyen. In talks with the UK it is represented by one of the Commission’s numerous Vice Presidents, Maroš Šefčovič from Slovakia.

In practice, however, it has always mattered a great deal what the EU’s de facto banker, Germany, and its Chancellor Angela Merkel think. In the time it takes for a new coalition government to be formed, Frau Merkel will continue as German Chancellor and her government will remain in place.

As with all transitional governments, it is likely that they will be unwilling to change any policies nor to take any major new policy decisions. This has a direct effect on any new initiatives planned by the EU Commission. Existing initiatives will remain, but new ones are likely to be ‘verboten’.

When it comes to the EU’s stance on Brexit Britain, therefore, Facts4EU.Org expects the policy of ‘punishment beating’ to continue. In particular there will be no change in the EU’s position on renegotiating the odious Withdrawal Agreement with its disastrous Northern Ireland Protocol. Nor will there be any change in the EU’s policy of refusing to accept back illegal migrants crossing the Channel from France.

When it comes to one of the UK’s most important sectors, the financial services industry, the UK will continue to allow EU firms to operate in the UK market. Conversely, the EU will continue to deny equivalence of any kind to UK financial firms operating in the EU, despite it giving this to other countries half-way around the world.

[ Sources: Germany's Federal Returning Officer | German media ] Politicians and journalists can contact us for details, as ever.

Macron may get higher heels

It is commonly referred to as enforcement, not punishment, if you knew the rules, even helped to write said rules & then vote to have those rules applied to yourself.
Next week, the UK government will extend it's admission that it is incapable of checking EU imports because it failed to prepare for an inevitability that it assumed would somehow not be applied to them. Exceptionalism at it's finest.

So which way and whatever, Germany still rules and controls the EU.