Official: EU treats N.I. as an EU colony in its economic trade figures

Has anyone told the people of Northern Ireland? 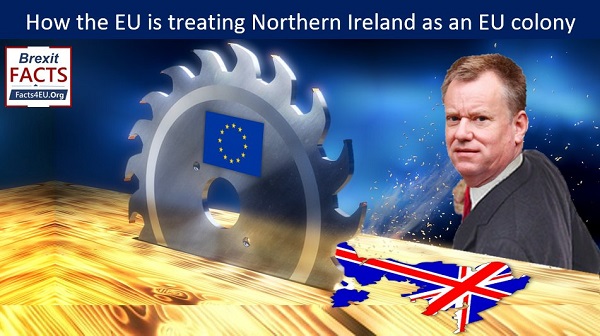 Facts4EU.Org provides proof that EU now considers Northern Ireland to be part of the EU

Political organisations can sometimes ‘fudge’ awkward issues and this is nowhere more true than in the long and bureaucratic corridors of Brussels. When it comes to reporting economic information, however, it gets more difficult to hide uncomfortable truths.

Since 01 January this year, it seems the EU has been treating every product purchased by a citizen or company in Northern Ireland which comes from an EU country as being a purchase from within the EU, rather than as being an EU export to a non-EU country.

Similarly, every product sold by a citizen or company in Northern Ireland to an EU country is being treated as a sale taking place within the EU, rather than as being an EU import.

In effect, it seems that the EU’s official statistics agency now treats Northern Ireland as a colony of the EU for trade purposes. The only thing it doesn’t do is to cite Northern Ireland in its countries list, as this would clearly cause a political explosion.

Here is the proof

Every month the EU releases official figures for international trade, broken down into imports, exports, and the trade surplus or deficit with each country it trades with.

In the notes below the latest EU trade release issued yesterday (15 Oct 2021) , the EU says the following:-

For completeness, below is the full text of the 'small print' in the EU's trade figures release yesterday in relation to the UK with and without Northern Ireland.

What about the EU’s Customs Union?

What our report above highlights is that the specific provisions in relation to Northern Ireland, demanded by the EU, are such that the EU’s official statistics agency now treats Northern Ireland as if it IS part of its Customs Union.

Above we wrote that Northern Ireland is being treated like “a colony of the EU for trade purposes”. The justification for this is simple. If the EU is recording N.I. imports and exports with its member countries as if it were a member, and if the rules governing this trade are being imposed by the EU with no say by anyone in Northern Ireland, then this amounts to the EU acting like a colonial power.

Indeed, one only has to look at how an EU Vice-President can tour the Province as he did last month, with no UK Government Minister in attendance, meeting people and organisations and making statements, as if the EU owned the place. 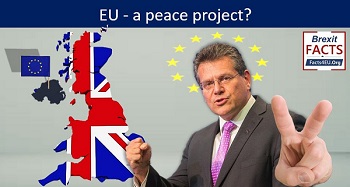 This issue is not about semantics. It is about reality, regardless of how treaties might try to dress things up.

The simple fact is that it seems the EU is now treating N.I.’s imports and exports with EU countries as if they were “intra-EU”. In what sense can this be reconciled with the treaty saying that N.I. is part of the UK’s Customs Territory, not the EU’s?

This is yet another reason why Lord Frost must insist on full democratic and legal control being restored under the sovereignty of the United Kingdom. This means a completely different Protocol, not a fudged mish-mash which will only result in more years of misery caused by the EU.

We wonder if Lord Frost is planning to have stuffed goose this Christmas…?

[ Sources: EU Commission official trade figures, released 15 Oct ] Politicians and journalists can contact us for details, as ever.

How dare they! NI is British always has been, always will be as long as the people of NI want it to be. That's like us saying the republic is British! How'd they like that I wonder? Effing EU, got ideas above their station!

There shouldn't be any Ni protocol, shouldn't have been a part of any deal. NI is British and no foreign power should have any juridiction over it

The saw blade in the illustration is the wrong way around. The saw will only work if it goes out into the Atlantic: it cannot sever NI from the UK because it's travelling in the wrong direction

So does that mean the UK will no longer be including NI in our trade figures.....
WTO now and stop the EU's insidious encroachment on our territory.

1. "Always" is a long time. The clue might be in the name.Maye NI needs to have a referendum - it's the only democratic thing to do.
2. There wouldn't be...if you didn't vote for it. You got what you voted for.
3.Like everything to do with Brexit - clueless.
4.Our trade figures are not the best anyhow, have you seen the empty shelves?. Voters asked for the EU to protect it's trade bloc. If only there was someone who could have warned us that this might happen.

when i heard that septic vic had done a tour of our territory n.b. northern ireland i was fuming. northern ireland are a part of the uk and no way should this tour have been allowed without our governments and n.i permissions. its time for the uk to put an end to this ongoing farce.how about uk tours to eu problem areas of which there are many self inflicted examples eg poland etc.[ EU RULE OF LAW ] as laid down by the EU GESTAPO sorry ECJ.

The EU is merely giving expression to the reality of our situation in Northern Ireland, as long as the Protocol remains in place, we are effectively part of the E.U. and Mr Sefkovic will be just the first in a line of unelected, unaccountable Viceroys. My only surprise is that when he comes on one of his state visits the representatives of Sinn Fein, the S.D.L.P. and Alliance parties don't kneel and kiss his hand.