The insidious agenda of the EU autocrats to deny freedom of speech, affecting the UK 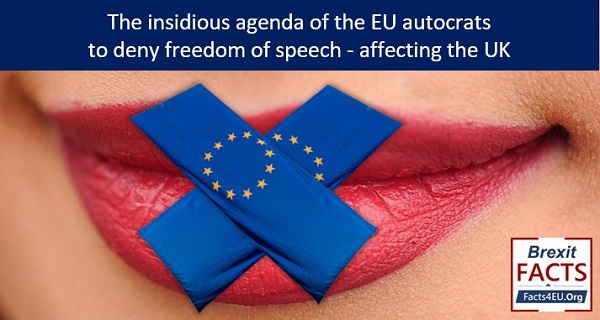 An important Facts4EU.Org Saturday editorial on the public’s right to know it all

This article is about freedom of speech – something those of us living in the United Kingdom always used to take for granted. It is fair to say that the citizens of many (but not all) EU countries took the same view.

For the last two decades this has been slowly changing under our noses and the process is set to accelerate thanks to a little known EU Commission ‘voluntary’ initiative, called the “Code of Practice on Disinformation”, now set to become law.

Despite Brexit, and despite (most of) the United Kingdom having left the European Union, the EU still has the power to change our lives.

This applies to a great many aspects of our daily lives. In this case we are going to show you one example of this. It’s a subtle process, but this does not make it any the less toxic.

Let’s talk about ‘Hot Topic X’… or not

Imagine a new topic comes up and begins to pervade the public consciousness. Examples recently include COVID-19, vaccines, and of course ‘climate change’ which has been a topic which has been growing for years. For the purposes of this article let’s call the new area of interest ‘Hot Topic X’.

The BBC and others, always desperate to fill their yawning hours of 24 hour ‘news’ coverage, leap on the new topic. Being new, no-one knows much about it so they look for someone – anyone – who has written about this before. Typically this means relatively obscure academics who suddenly find themselves in demand. Flattered by the attention they are only too willing to go on television and talk.

Most people know that talking heads are one of the cheapest ways of filling airtime. Certainly it’s a lot cheaper than ‘journalists’ leaving their studios, going out, digging up a wide variety of news, and presenting filmed reports. Much cheaper to stick to the new Hot Topic X, bring some ‘experts’ into the studio, and encourage them to exaggerate the subject a little to maximise the audience.

Before you can say “They’re paying Andrew Marr HOW MUCH!?”, Hot Topic X has grown into a mini-industry, spawning ‘experts’ from think tanks and trade organisations, all pronouncing on the new subject. Then, instead of finding alternative views, the BBC vets interviewees in advance to ensure they are ‘on message’.

And hey presto, a new ‘orthodoxy’ has been created.

You want a balance of opinions on Hot Topic X? Sorry, dissent is no longer tolerated

You might be one of those people who would quite like to hear all sides of the argument being given equal prominence so you can form a judgement about Hot Topic X. You might even think this perfectly reasonable.

Unfortunately this is not possible any longer, because the agenda has been set. All the right people seem to be in agreement, so the only dissenting voice you might hear is from someone deliberately chosen to be less credible, or on the extreme end of the argument. And they can only appear if they are prepared to be interrupted by presenters every five seconds.

Have you heard about the EU Commission’s ‘Code of Practice on Disinformation’? No? Funny that, because this all started surfacing properly over three years ago in 2018, when the United Kingdom was still a member country.

In advance of this, the unelected autocrats of the EU were becoming concerned about freedom of speech, but not in a way in which they wanted to extend this – quite the reverse. In late 2017, “The Commission set up a High-Level Expert Group to advise on this matter.” The result was the embryonic ‘Code of Practice on Disinformation’.

The Code of Practice has so far been voluntary for online organisations, but the EU Commission has already announced that “The strengthened Code of Practice in 2021 will evolve towards a co-regulatory instrument as outlined in the Digital Services Act.” In other words the Code will become more restricting and it will shortly become law.

Who has signed up and why?

In an obvious effort to influence and mitigate policy and reduce the impact of even more draconian laws affecting their businesses, a wide range of the major online companies have signed up.

These include: Google, Facebook, Twitter, TikTok and Microsoft, and new signatories are set to join imminently including Vimeo, Clubhouse, and many more.

The important point to note is this: Global countries dominating our use of the internet are all acquiescing to the EU Code. No-one can seriously doubt that they will not apply the same policies to the use of the Internet in the United Kingdom, regardless of what laws are passed by the British Government.

The EU’s Code sounds reasonable, but look at what has been happening

If you read the EU’s Code, much of it sounds reasonable. The problem is what has been happening in practice. In the UK, many people have suddenly found themselves banned on Twitter and on Facebook. Others have found themselves ‘shadow banned’.

In many of these cases they were banned for simply expressing a point of view. It doesn’t matter whether you might have agreed or disagreed with this point of view. The fact is that some young person working for one of those organisations didn’t like what was being said and marked the poster as ‘breaking the code of conduct”.

The most famous example of this is the banning by Twitter of the democratically-elected, sitting President of the United States. Regardless of what anyone thinks about Donald Trump, for the President of the most powerful country in the World to be banned by one of the most important online platforms for not conforming to their ‘orthodox’ position is quite extraordinary.

It is worth pointing out that in many cases the banning of individuals was for saying things deemed unacceptable at the time, but which have now come to be accepted as being true – or at least possible or probable.

We can and must take a different road

We are at a crossroads. Some would say that we have already crossed the junction. One thing we can be certain of is that if we do not resist these totalitarian monoliths then we might as well pull our freedom car over to the side of the road and get on the next groupthink bus that comes along.

This is about orthodoxy (‘the party line’), homogeneity (‘groupthink’), and the suppression of dissent. For as long as we can, Facts4EU.Org will always fight these.

Do please help us with a donation today so we can carry on the fight at political and media levels.

Speech control is getting way beyond tolerable. Whatever we are not allowed to say any more or having to use other words for - WE WILL STILL THINK IT!
Politicians can twist and turn it as much as they like, it will only increase tensions and not relieve unsolved conflicts. What a stupid way to control crowds. Never resulted in anything good in history and never will.

This site is a putty model of groupthink. You've made a storm in a tea cup only because DJ Trump got banned from Twitter-for breaking their terms & conditions. The man was using it as a pulpit to extend his hate-reach. He should have been banned sooner & given a wider ban; he was dangerous as evidenced by actual violence on Jan. 6th - something you were sure to omit.
Freedom to speak is also freedom to think. Anyone seriously engaged in the latter could have told you that leaving the EU only meant we'd still be affected by it but be unable to do anything about it. The right wing is going to right wing, I suppose - that does not mean the rest of us have to stop thinking.

Thanks for flagging this. EU bureaucracy and hypocrisy going strong - multiple applications by this Code of the European Convention on Human Rights .. yes, that Convention that the EU COmmission has been told not to sign by the ECJ (because it would restrict its autonomy) but also told (I think by the EU Parliament) that it has to sign up to it ... except, guess what, it hasn't!!

The question is, will this apply to the UK? Will we slavishly follow an EU regulation yet again, even though we left?
If so what was the point?

Just ignore the EU. We voted. 'Out'. They don't like it, and think they can still control us. As No. 1 comments: 'Never resulted in anything good in history and never will.' To avoid being brain washed, I suggest you pull the plugs on your TV sets.