Brexit Britain will outperform EU’s top economies this year and next, says IMF 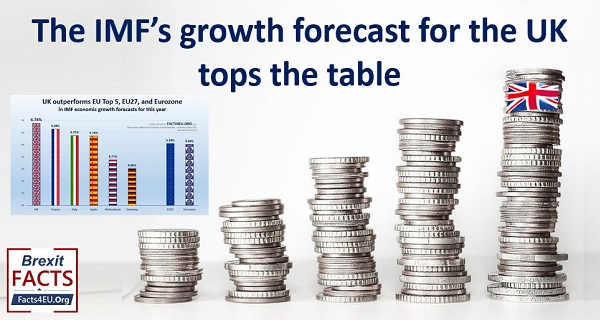 Facts4EU.Org brings readers the official facts, not the fantasy and fiction on social media

This year and next, Brexit Britain is set to outperform the EU’s top economies and that of the Eurozone as a whole, according to the International Monetary Fund (IMF) in its latest official forecasts.

Twice each year the IMF publishes its “World Economic Outlook”, showing forecast growth of the World’s economies, amongst other measures. Facts4EU.Org has analysed the numbers from the autumn edition and brings readers the positive findings for the United Kingdom.

IMF growth forecasts for the UK vs. the top five EU economies for this year (2021)

The IMF’s growth forecast for the UK tops the table
and is more than double that of Germany, the EU’s biggest economy 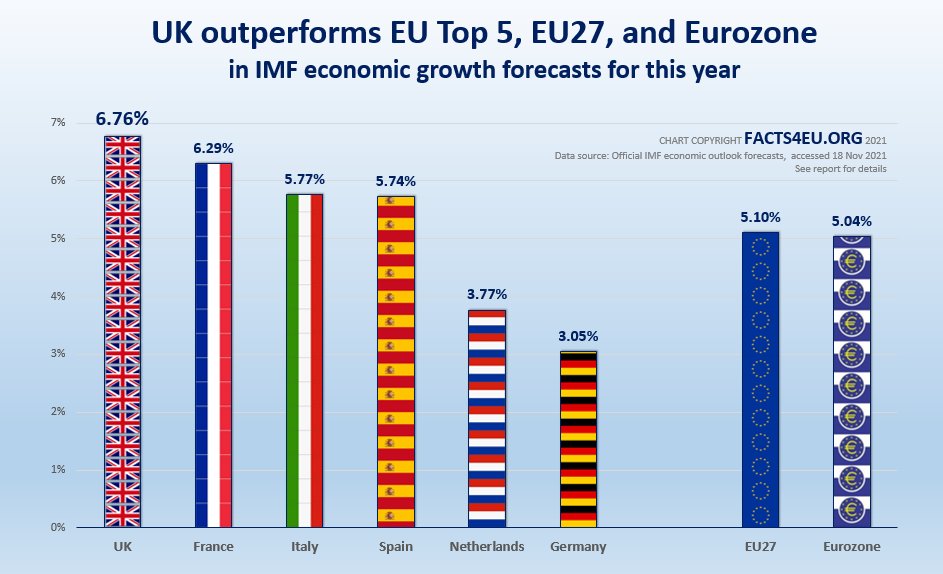 What happened to Project Fear’s apocalyptic forecasts if the British voted to leave the EU? 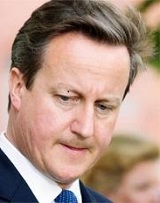 British voters were told in no uncertain terms by the then Chancellor George Osborne, the then Prime Minister David Cameron, HM Treasury, international organisations such as the IMF, and practically the entire UK ‘Establishment’ that the United Kingdom’s economy would fall off the proverbial cliff if the people voted to leave the EU.

The Project Fear forecasts were not only wrong, they were disastrously so. 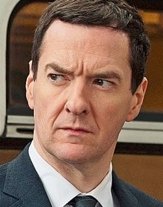 IMF growth forecasts for the UK vs. the EU27 and the Eurozone in 2022

Once again, the IMF forecasts that Brexit Britain
will outperform the entire EU27 and the entire Eurozone in 2022 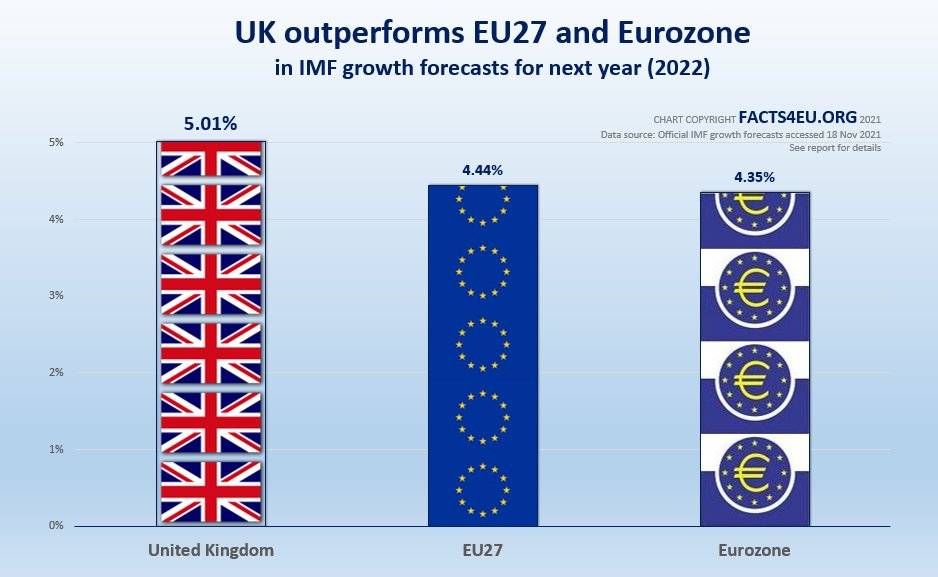 No. Certain elements of the media were quick to seize on the UK’s drop in GDP last year as a result of the Covid crisis. What they failed to take into account is the difference in the way the UK records GDP in comparison with EU countries.

A key element in the UK’s drop in GDP last year arose because of the way the UK records the health sector as part of its economy. EU countries measure this by expenditure. If millions of medical personnel in the EU are at home on full salaries, GDP is unaffected because the expenditure remains fairly constant.

[Note for economists: We know that this is a simplification of the immensely complex task of measuring GDP, but we have provided a simple summary for people who do not have time to read pages of technical discussion on this subject.]

If you dish it out, you have to learn to suck it up when your dish turns sour

In the run-up to the EU Referendum of 2016, the UK Government and ‘the Establishment’ published and promoted a constant stream of stories and official forecasts of the economic Armageddon that would immediately follow any vote to leave the European Union.

The British people largely took this in their stride. Brexit was always at its heart about independence, sovereignty, and democracy, not economics. This is something that the leaders of the Remain campaign never fully grasped.

Yes, the forecasts of economic doom and gloom undoubtedly swayed many voters to vote Remain out of fear, but this was not enough to overturn the overwhelming desire of the British people to take back control of their country.

We have never been fans of economic forecasts as they seldom turn out to be accurate, but perhaps what is sauce for the goose won’t be inappropriate for the gander, in this case.

Facts4EU.Org’s report above is yet one more vindication of the vote to make the United Kingdom an independent, sovereign nation once again. Not only has the UK regained some of its independence, (there is of course more work to be done on this), but the economic figures do not look too shabby either.

For the IMF to forecast UK growth this year being more than double that of the EU’s economic powerhouse Germany will, we hope, be reassuring to millions of British people. Assuming the BBC, Sky News, and ITN ever give this prominence, of course….

We badly need more of our thousands of readers to donate. Could this be you, today? It's quick and easy and we use two highly secure payment providers. And we do NOT ask you for further donations if you donate once - we just hope that you keep supporting us. Your donation stays anonymous unless you tell us otherwise.

If you value reports like the one above, please help our work with a donation. We have far more to do in researching, publishing, campaigning and lobbying Parliament than we have in terms of the financial resources to fulfil these tasks. We badly need funding to continue - we rely 100% on public donations from readers like you.

If you believe in a fully-free, independent, and sovereign United Kingdom, please make a donation now. It’s quick, secure, and confidential, and you can use one of the links below or you can use our Donations page here. You will receive a personal, friendly ‘thank you’ from a member of our team within 24 hours. Thank you for reading this. Please act now.

[ Sources: International Monetary Fund, World Economic Outlook ] Politicians and journalists can contact us for details, as ever.

Shhhh! Don't tell Rejoiners, it might affect them badly!

And this is with massive covid financial losses. In the next couple of years the UK economy will surge forward even more.
If only the BBC/ITV/SKY etc
Would actually tell the truth and report tonight that we are now outperforming the German economy.
Oh yeah, That's good news that could be attributed to Brexit so we will hear none of it.

I have no doubt the remainers experts that forecasted doom will say these expert forecasts are made by the wrong experts.

Ok, it's a fair swap. They took our lorry drivers ham sandwiches.
We took Shell and Unilever.

Not what so called experts said would happen. 27.4 million people got it right! And we did tell you so for four years!

I am usually sarcastic about estimates, so I will comment that this is just an estimate. But there are two points in its favour. One is that the IMF does this kind of thing for a living, while newspapers tend to give you sensational "one hundred thousand missing truck drivers" sensational estimates once in a while. The IMF does the numbers while newspapers do narratives and headlines.
The more important point is that the IMF have no motive here. They are not trying to prove they were right about Brexit, since they took no strong position, whereas the newspapers are definitely trying to prove the were correct to oppose Brexit.

I am reading today that Tony Blair is about to announce his own solution to the Northern Ireland Protocol issue. I don't think this is good news or for the benefit of the UK. In the first place, Lord Frost is getting ready to present a proposal to the EU, as he told the BBC yesterday, and the very last thing he needs it s for Tony Blair to step in, up-stage him, and confuse the issue.
What's more, Frost's proposal, which seems to be based on mutual recognition of supervision and which would avoid a permanent EU presence in NI by making the UK responsible for policing the movement of goods into NI from the rest of the UK would actually be very difficult for the EU to reject without looking as if they actually want permanent conflict. So for Blair to intervene now with another proposal looks very like his attempt to rescue the EU from an embarrassing situation in which Frost presents them with an offer they can't reasonably turn down.
Blair was the PM who allowed a lot of foreign actors to meddle in UK domestic sovereignty with NI as the excuse, and it looks to me as if he is trying the same thing again. He's trying to use NI as an excuse to give the EU a permanent base inside UK territory with no date for their exit.
We need to be clear that a physical EU presence inside the UK is not a permanent situation.