Why should some Scottish votes be worth up to 3.5 times more than English ones?

A Facts4EU.Org exposé of current parliamentary democracy in the United Kingdom 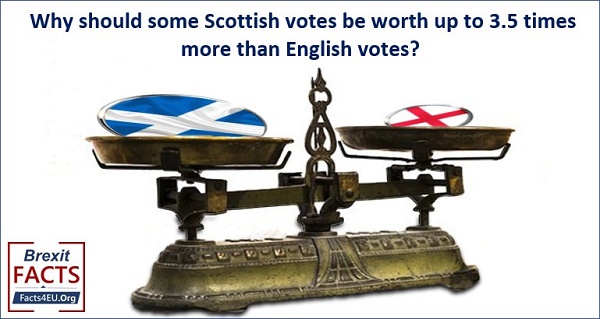 Post-Brexit, isn’t it time to ‘level up’ democracy in the UK?

The simple fact is that if you voted in the last UK general election in December 2019, your vote had a wildly different value based on where you lived in the United Kingdom.

Ahead of the Scottish Parliament elections in six weeks’ time, Facts4EU.Org looks at the state of parliamentary democracy in the post-EU era in the UK as a whole.

How much is your vote worth?

The simplest way to measure this is to look at how many people in each constituency are eligible to vote for a Member of Parliament to represent them. In principle, it might be thought that each of the 650 MPs should represent broadly the same number of voters.

Not only is this not the case it is in fact a long way from reality. We examined the official data on the size of the electorates for each constituency across the UK in the 2019 general election and our findings are below.

The top 10 and bottom 10 places to live in the UK, for the power of your vote 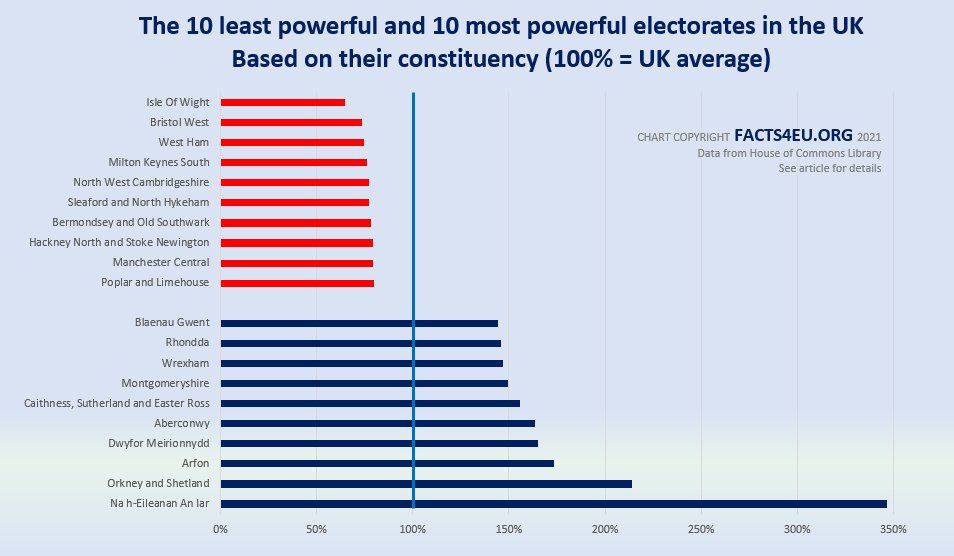 If you're English, your vote is worth less than if you live in Scotland, Wales, or N.I.

The UK Parliament service does not give a summary of the average size of constituencies in each of the four nations of the United Kingdom: England, Scotland, Wales and Northern Ireland. It does so for the latter three, but not for England. The Parliament service chooses to break England into regions and then give averages for each region.

Facts4EU.Org felt that readers might wish to know the average size of a constituency in each nation, giving England a comparable status to the other nations, and the results of this analysis are below.

How much more is your vote worth in each of the UK's four nations? 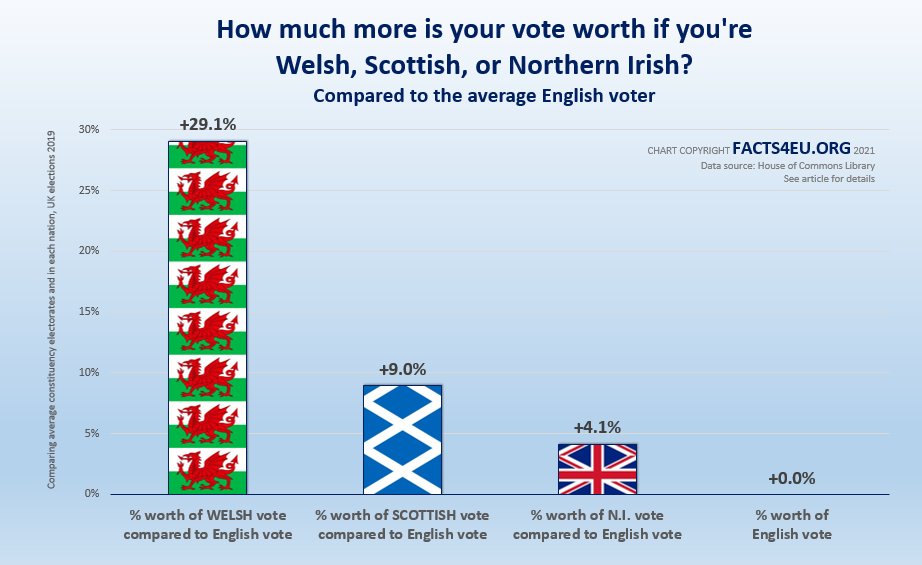 Note: The official flag of Northern Ireland is the Union Jack, so this is what we have used in the chart above.

If the UK Parliament represented the four nations' electorates numerically, how many MPs would each nation have?

If Parliament represented the four nations' electorates equally, this is how the seats would change 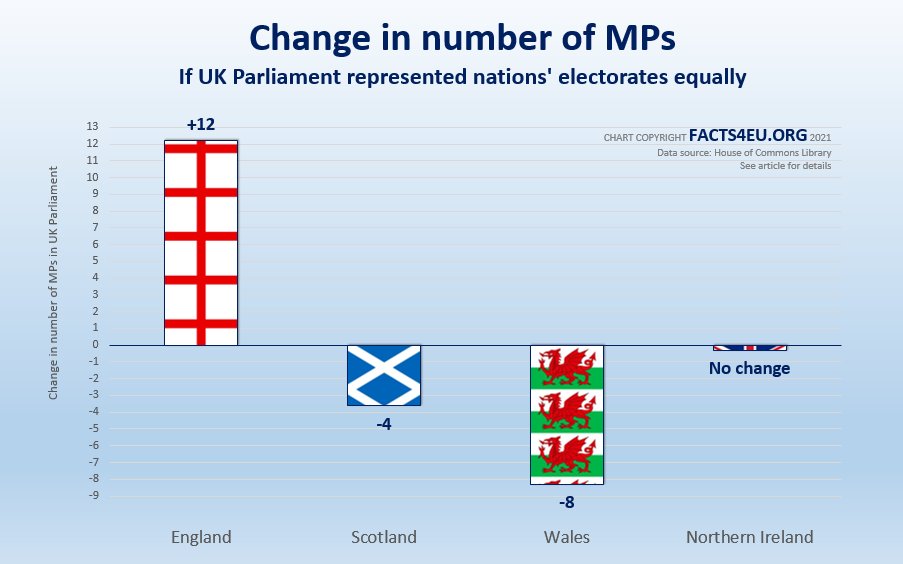 What is the Boundaries Commission doing?

None of this is relevant, of course, unless a government acts on the recommendations which the Boundary Commission presents, which is becoming extremely rare.

Whenever we research and publish a report such as the one above we are accused of 'nationalism' by - ironically - nationalists. All we have done is to try to present summary information on the parliamentary democracy in the United Kingdom, to inform the debate.

Our readers come from all across the UK, and from many other countries. The Brexit Facts4EU.Org team is the same. There is no question in our minds that democracy is much safer in the United Kingdom than it is in the European Union bureaucracy in Brussels, but this does not mean that we should not constantly seek to improve.

Clearly the size of constituencies in the UK in terms of the number of their registered voters is a crude measure but it is nevertheless important. People should feel that their vote is broadly worth the same, no matter where they live in the United Kingdom.

In a sense, the Boundaries Commission has an impossible task. They have to look at a great many factors, including local authority boundaries, people's sense of identity in given areas, and the matter of physical geography. That said, for the people of the Isle of Wight to know that the people of the Western Isles (now known as Na h-Eileanan An Iar) have a vote which is 3.5 times more powerful in terms of representation in Westminster cannot be a comfortable thought.

Democracy and freedom have been hard fought over for centuries. Our Union has been in existence for over 300 years. Surely the United Kingdom needs more of what the EU calls a ‘level playing field’ for English people when it comes to parliamentary representation?

Democracy might be much healthier in the UK than in the EU machinery of Brussels, but in this post-Brexit world perhaps ‘a refresh’ would not be a bad thing.

[ Sources: UK Parliament service | ONS ] Politicians and journalists can contact us for details, as ever.

Luckily for the rest of the UK, we have our own questions.
Here are a few as I make a bowl a porridge:
The recent bill that criminalises protesting - is that democratic?
Is it democratic to write new voter restriction laws - when they are no real reasons to?
Or how about the practice of only funding the areas that voted for the Tory party?
Surely, the suppression of an intelligence community report on cyber tampering
during the referendum & election is as far as one gets from democracy.No?
Awarding contracts along party lines - that's got to be undemocratic, if not criminal.
The frontpage of papers worldwide saw uk cops roughing up women
during a virgil - all because a cop murdered a woman. I guess that's not the optic democracy hoped for.
You keep having no questions in your minds & we'll keep having many in ours - how about them apples?

England has NO Democracy. Since 1998 when Blair introduced Devolution, England had been sidelined. Apart from various attempts to chop it into artificial regions of course.
Scotland, Wales and N.Ireland have their own elected Parliament, looking after Devolved affairs. England has nothing, just the Westminster UK Parliament which has MP's from Scottish, Welsh and N.Irish seats voting on English affairs. Something English seat MP's cannot reciprocate.
The Democratic defecit is a lack of an English Parliament.

2. Why don't you do like last time - have an advisory referendum & then selectively opt to take that advice only if the outcome is an exit out of that union.
It's worked once before & so much easier than trying to fix things.

4 Perfidious Albion - it's amazing how referendums become merely "advisory" when you don't get your desired result.

If you take Rhondda and block it together with any neighbouring seat you still would not get the same number of electors as the Isle of Wight.
They should use the Isle of Wight as a template and every seat should have 110000 +/- 5% electors regardless of geographic size.

Fascinating article, a very informative eye-opener: I knew the scales were uneven but truly had no idea of just how unfairly weighted things actually are. If this were seen to be fairer overall I suspect there would be far less of a growing clamour for true proportional representation - the merits of which I am still wholly unconvinced of, judging purely by how that has turned out in some continental countries.

Is there not a clause in the Treaty of Union which guarantees Scotland a certain number of MPs in the UK parliament?

Why should any vote be worth more