Facts4EU.Org contrasts what we were told in 2016 and the reality today 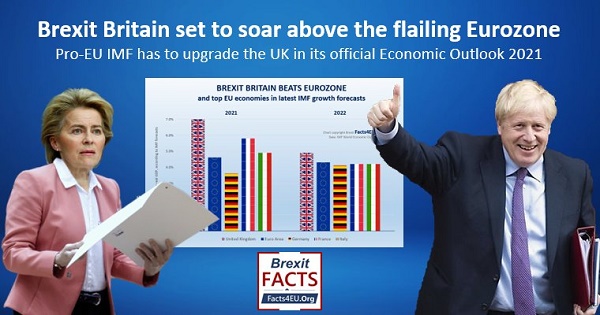 Pro-EU IMF has to upgrade the UK, in its official Economic Outlook 2021

On Tuesday (27 Jul 2021) the International Monetary Fund (IMF) released its latest World Economic Outlook Update, putting the prospects for the UK higher than those of the Eurozone and of the EU’s three largest economies: Germany, France and Italy. 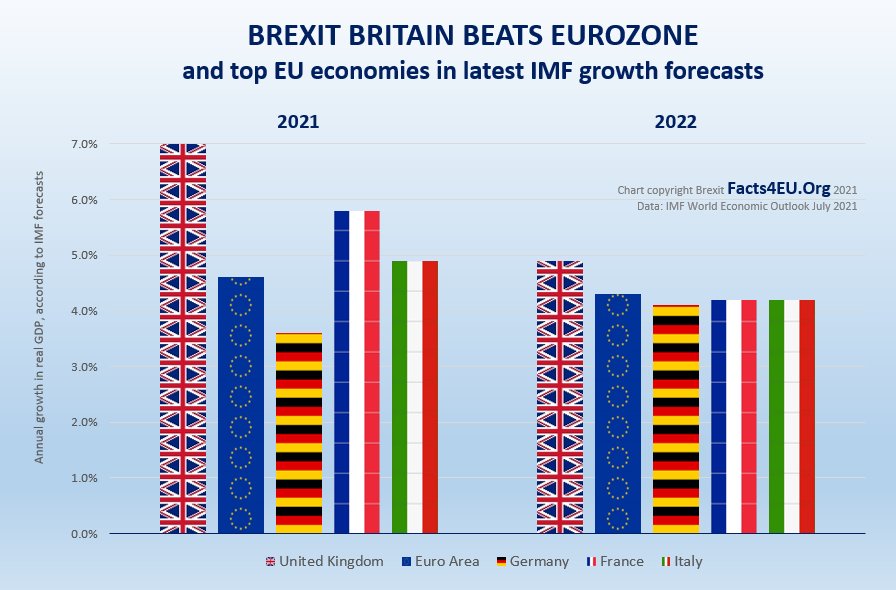 The IMF wasn’t always so bullish about the UK economy

This year and next, the IMF expects Brexit Britain’s economy to grow significantly faster than that of the Eurozone and the EU’s three largest economies. However, readers who have been with us since before the EU Referendum will know that “’Twasn’t always thus.”

On 01 June 2016, just three weeks before the British people were due to vote in the EU Referendum, the IMF helpfully produced a doom-laden document which was seized upon by the arch-Remainer government of David Cameron and George Osborne. In amongst all the forecasts, tables, and charts, the IMF summarised things as follows:-

“In staff’s view, increased uncertainty and risk aversion in the short and medium run would result in a material hit to incomes. The net long-run economic effects of leaving would also likely be negative and substantial, though there is significant uncertainty about the precise magnitude. Reduced trade access would likely lead to lower output and investment. Permanently lower incomes would be associated with reduced consumption. Pass-through from a weaker pound would result in higher prices for imported goods; depreciation would mitigate economic losses to the UK somewhat by stimulating net exports, but not enough to offset declines in other expenditure categories. Fiscal savings from reduced contributions to the EU budget would likely be outweighed by lower revenues from expected lower output, resulting in a net fiscal loss.”

The IMF’s special report ran to 65 densely-worded pages and contained a large number of complex charts and tables. The IMF described it as a “Selected Issues paper on the United Kingdom” as “background documentation for the periodic consultation with the member country.” The government of the member country concerned was certainly delighted to receive it, as it fed nicely into the Project Fear narrative which by then was reaching epic proportions.

At the time, the Facts4EU.Org team characterised the overall message of the IMF report internally as “Vote Leave, be poorer, suffer forever”.

Anyone remember the OECD’s report on the EU’s Single Market, in the same month as the IMF report?

In the same month that the IMF produced their special paper on a potential Brexit, another international organisation published an important paper.

This other report was about the EU’s Single Market and it was produced by the pro-EU Organisation for Economic Co-operation and Development (OECD). The OECD were highly critical of the Single Market, calling it “unfinished and stalled" after 25 years. In effect the report criticised the EU across the board for its poor implementation and for the EU’s failure to address all the fundamental flaws in it.

Facts4EU naturally published many detailed articles on the OECD report, but there was almost no coverage from the mainstream media. The UK government never mentioned it, despite its release just weeks before the EU Referendum. It must be remembered that this was at a time when David Cameron, George Osborne, and all the massed ranks of the Remainer Establishment were busy extolling the virtues and indeed the absolute necessity of the UK being in the Single Market.

Feeling good on a Friday

We hope that our chart above will make many readers feel positive this morning. If the pro-EU IMF, (whose former Chief Executive Mme Christine Lagarde is now the Head of the EU’s Central Bank), are putting the UK’s growth so much higher than the Eurozone’s, then things must be looking very rosy indeed.

Some people will no doubt take us to task for drumming up memories of the very different forecasts being fed to the British people just before they voted in the EU Referendum.

Our answer to this is simple. No-one that we can think of in any position of power or influence has ever apologised for misleading the public to such an egregious extent. If we say nothing, what does this say about accountability in public life? And how can they know the British people expect and deserve an apology?

Furthermore, we throw a question back: If Brexit Britain’s economy had plunged off a cliff-edge as predicted by the Remainer Establishment, would we not be hearing about it on a daily basis on the BBC’s news bulletins?

We all know the answer to that one.

[ Sources: IMF | OECD | EU Commission ] Politicians and journalists can contact us for details, as ever.

Nice to have a positive piece at the start of my day and your chart really brings home the message.
It won't come as any surprise to Brexiteers that organisations like IMF did down the UK before we all voted and are now saying something different but I applaud you for publicising facts like these. They need to be said. I'm afraid I wasn't reading you back in 2016 (I wish I had been) and so I was surprised to read about the OECD report on the single market. No wonder the government didn't want to talk about it.
Please keep going, I just sent you a small donation and I hope others do too.
Rgds, Douglas

We the Leavers will never get any apology. I thought I lived lived in a democratic country now I know it is not true. EU has rubbed off any of that by bullying and building there empire.
God help us , the EU will be worse then Russia.

"" The OECD were highly critical of the Single Market, calling it “unfinished and stalled" after 25 years.""
Born out by the fall in economic trade? When the trend of the EU’s trading share declining over time – from 34% in 1980 to an expected 20% by 2022. Ref: FullFact article.
Indeed, from the horses mouth it is down to 15%
International trade in goods - Statistics Explained
.ec .europa. eu / eurostat / statistics-explained / index. php / International_trade_in_goods
""This article discusses …….The EU accounts for around 15 % of the world's trade in goods.""
A 19% drop!
Do they spend too much time on political expansion at the cost of the original alleged ambition of trading apples & pears to gain peace . Indeed, with military ambition, I would suggest that they might bungle the ‘peace’ ambition?

Re: my above post.
Anyone got a figure for the percentage rise in EU membership from 1980? Can't seem to get a figure in my research.
Reason: It would appear to have a bearing on the 19% drop in the EU World Trade figures if the EU has had a (say a 50%) increase in membership?
Cheers.

The UK suffered one of the biggest falls in GDP due to the pandemic measures. So obviously it is going to have one of the biggest bounce-backs. Once again F4EU have cherry-picked data to give the wrong impression of what is really happening.
What's more if you convert GDP in GB pounds to US Dollars or Euros, even before Covid, UK GDP had declined very significantly, due to the devaluation of the pound.
I am still looking forward to just one business example where we have clearly gained, due to Brexit. All I am seeing is losses so far.

As I have said privately many times and still hold to be true. EU is USSR without the tanks. Keep publishing the facts. Regards

They always knew we would thrive

2. No John, you Leavers never will get an apology - whatever for?
I doubt Leavers have got it in them to apologise.

Great article. I see all the miserable rejoiners are being negative as usual. For some reason they cannot stand any good news.
Keep up the good work!