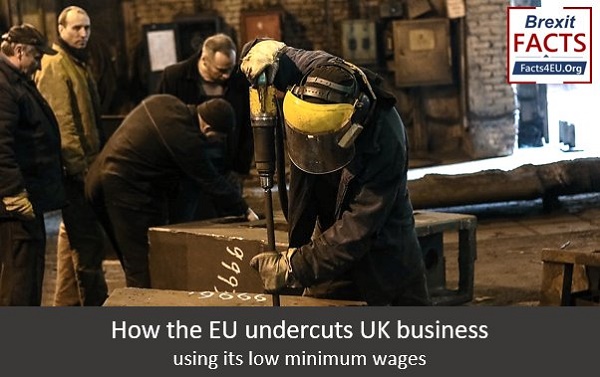 The latest official figures on minimum wages in the EU show just how un-level is the ‘playing field’ which the EU talked about incessantly in the run-up to the trade deal signed by Boris Johnson on 30 December 2020.

When the EU demands ‘fair competition’ and a ‘level playing field’, most people would consider this to involve similar labour costs and workers’ rights. This is not the case. The UK is undercut by competition from EU countries with far lower wages and significantly fewer workers’ rights.

Where is the 'fair competition' from the EU? 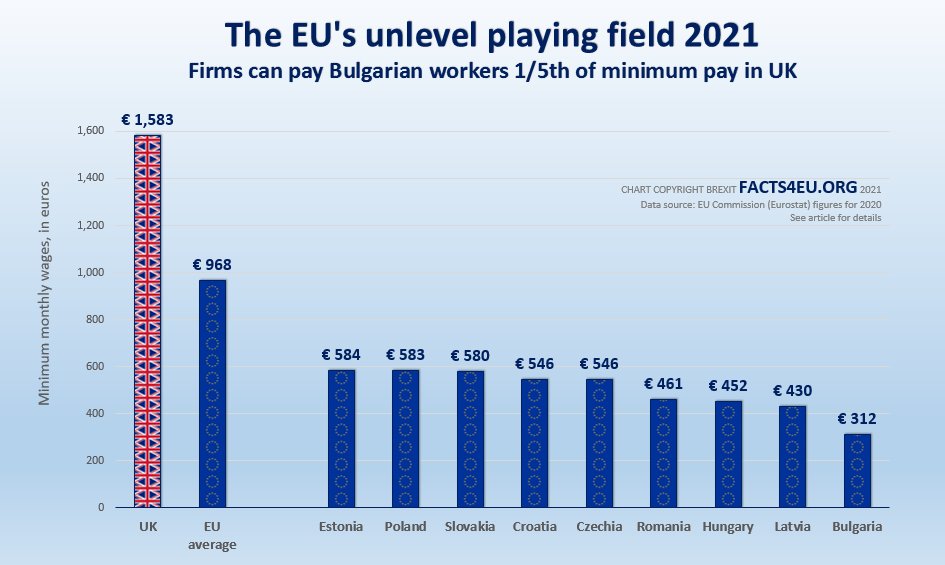 On workers’ rights, the EU still lags behind the UK by over 20 years

The situation is just as bad when it comes to workers’ rights. It was the UK that led – and leads - the way on this. For example the standards for statutory holiday entitlement and maternity pay are far higher than in the EU, as we have previously reported in detail.

EU workers' and women's rights laws are lower than UK’s

Last October the EU Commission announced that it would be bringing in a ‘Directive’ on minimum wages across the EU. However 23 years after the UK enforced a national minimum wage, the EU still proposes to make their own version voluntary.

Buried down in the EU Commission’s communication about this new Directive was the following:

“It does not oblige Member States to introduce statutory minimum wages,
nor does it set a common minimum wage level.”

In other words, 23 years after the UK led the way and introduced a national minimum wage in 1998, the EU will still not have one, and furthermore it will not compel member states to introduce one.

The EU talks but does nothing 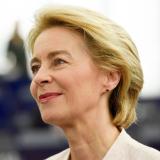 We would love to keep the team together, working for you

Sadly, the challenges of seeing Brexit through are not the only concerns we face. Freedom of expression and the basic principles of democratic accountability are under attack as we have never seen before. We have far more to do in researching, publishing, campaigning and lobbying Parliament than we have in terms of the financial resources to fulfil these tasks. We rely 100% on public donations from readers like you. Unlike the Remain/Rejoin camp, we do not have foreign billionaires to subsidise our work.

If you believe in a fully-free, independent, and sovereign United Kingdom, and want to see the full benefits of Brexit being delivered, please make a donation now. It’s quick, secure, and confidential, and you can use one of the links below or you can use our Donations page here. You will receive a personal, friendly ‘thank you’ from a member of our team within 24 hours. Thank you so much if you can help to keep us going.

[ Sources: EU Commission statistics agency Eurostat ] Politicians and journalists can contact us for details, as ever.

We must remove benefits for foreigners until they have worked here legally for at least three years.

UK are the fools, we allow it to happen. We are weak, need a Thatcher in control, it wouldn't happen then.

Of course Brexit isn’t done! We have to have the public inquiry first. And then we have to prosecute every single one of the lying fascists who promoted Brexit.

3 buster.
Clearly you will not accept the evidence that Brexit is beneficial to Britain.
You are stuck in your belief that the Uk should be in the Eu and that won't change.
Therefore your comments mean nothing here.

My information is also that the EU's proposed directive on minimum wages is progressing slower than a tortoise. Predictably. There's a lot of disagreement between member states .....

@ buster,
Oh dear you cannot see that having a organisation run by unelected, unaccountable people is MORE fascist like ? how about if those 'leaders' were immune from prosecution too ??? oh dear there we have it - the EU , creeping towards fascism more every day !!

Just shows how out of touch the Labour Party and Trade Unions are.
There argument for remaining in the EU was to protect Workers Rights, Pay and Conditions.
Not much chance of that looking at the EU unlevel playing field

I cannot forget a tv documentary about Spanish greenhouse regimes where migrant workers were used and abused and exploited at low wage, living in appalling over crowded and unsanitary conditions. Unforgivable, but permitted, even encouraged in the eurocracy. Don't anyone suggest their employment law is in any way better than ours.

Dear facts4EU, This is all very interesting but you need to explain what relevance this information has for us in the UK. Apart from the UK Gov't considering a "level playing field" or cheap labour goods complaint under the new Trade Agreement rules and possibly levying an import tariff I can't think of anything. We are not the EU's conscience and should just let them get on with it.
We should learn from our experiences with the EU but should not be constantly looking back. Post EU, we now have new interests and should be pursuing these.
Here's part of Palmerston's speech to Parliament: "It is a narrow policy to suppose that this country or that is to be marked out as the eternal ally or the perpetual enemy of England. We have no eternal allies, and we have no perpetual enemies. Our interests are eternal and perpetual, and those interests it is our duty to follow

@ Derek Lund, you might find it would help if you read the article. You could try just looking at headings like "How the EU undercuts UK businesses using its low minimum wages" and "Latest figures show EU’s shockingly un-level playing field which UK companies must compete with". If you can't see the relevance to us in the UK then I don't know what to say.