EU fanatics turn on their own EU in "vaccinations fiasco" 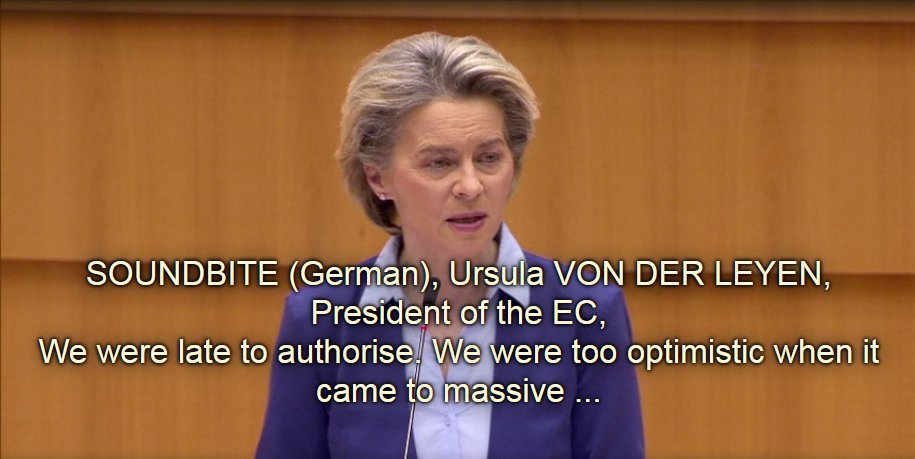 Brexit Britain continues to storm ahead, as even Guy Verhofstadt attacks his utopian EU

In the EU Parliament’s latest session on the abysmal performance of the EU Commission in rolling out the EU's vaccination programme, Commission President Ursula von der Leyen was finally forced to admit to responsibility for the EU’s failures.

“We were late to authorise. We were too optimistic when it came to massive production and perhaps we were too confident that what we ordered would actually be delivered on time.”

VIDEO: Even 'Ghastly Guy' cannot contain his criticisms of his EU

In a sign of the growing anger from citizens in all EU member countries at the apparent incompetence of the EU in its handling of the vaccination programme, even arch-federalist Guy Verhofstadt MEP was unable to contain himself. He even took to the airwaves with his own little ‘broadcast’ on his Twitter channel. He described this as a "vaccinations fiasco".

Pro-Europeans should be the first to be critical when things go wrong. On vaccines, they certainly have…
My take on @vonderleyen’s #vaccine fiasco and how to move forward and fix it 👇🏻 pic.twitter.com/NiP0TQ3Xxl

So how bad are things over there?

Readers might have thought that the EU would have caught up a little since Facts4EU.Org’s last report on the Covid vaccination programme in the UK and Europe. Incredibly, this is not the case.

Below is our latest chart for total vaccination doses to date, by country 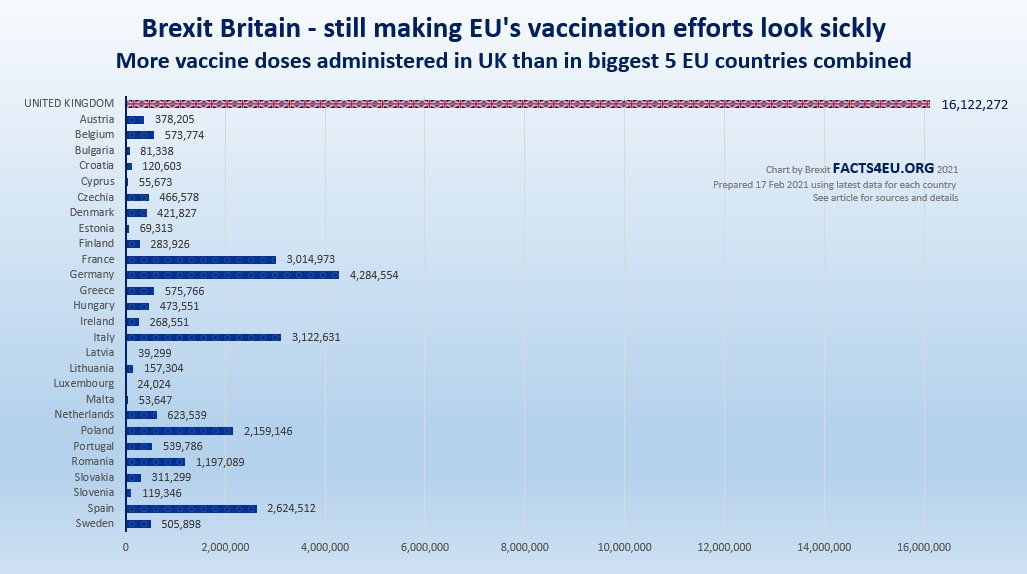 A stunning performance by Brexit Britain

The UK has delivered more vaccination doses than the five largest EU countries combined. This continues to be an astonishing performance and is a total vindication of the UK’s decision not to participate in the EU’s programme.

When the UK declined, the newspapers were full of Remoaner-Rejoiners declaring that this would be a disaster. In contrast, it is the EU that has been experiencing the disaster – and still is.

It is not only Guy Verhofstadt who is ‘verhoffing mad’

Clearly, if Frau von der Leyen thought her mea culpa to the EU Parliament was going to assuage her critics, she was mistaken. In contrast to its usual reputation for rolling over, then lining up and presenting EU ‘unity’ and ‘solidarity’ to the outside world, MEPs laid into the Commission. Excerpts from some of the speeches of senior MEPs from some of the main political groupings are below.

“We need a G7 summit to work with the United States and the UK to overcome the impasse and egoism, to overcome obstacles we still face in the production chain.”

“I ask for an immediate creation of a committee of enquiry looking into the responsibility within the commission in this disaster. We have the right to know.”

“We do want more transparency on contracts, as has been said, but also on data. Monthly data to be published by vaccination rolled out so that we can see where we stand with regard to the objectives that we set ourselves more than 70 percent by the summer. If we don't have this information, how do you expect European citizens to know where we stand, where we are on the route to vaccination?”

In response to the question posed by the last MEP we quoted above, we would merely say: “Pascal, if you would like to be better informed, try reading Facts4EU.Org.”

There are those (almost all Remainer-Rejoiners) who say we should not gloat at the dramatically better results achieved by Brexit Britain in its vaccination programme, compared to the EU. To these people we would say that we are not gloating, we are reporting, which is what readers expect us to do. We would then ask only one question: “If the situation had been reversed, do you seriously think the BBC and Sky would not have been full of it every day, blaming Brexit?”

In this crisis the EU has shown itself to be power-grabbing, then incompetent, sclerotic, dictatorial, and desperate to blame others at every opportunity. We think we have been very restrained, under the circumstances.

NOTE TO ALL READERS: We need you. Please help us to keep publishing what the BBC won’t. We rely on you to keep going, publishing unique, well-researched, and informative articles. Our work has impact and is read by politicians, international commentators, the media, and of course by the public. We will have to cut back even further without your help. Please make a donation today.

Quick and secure donation methods are below, or you can use our Donations page here. You will receive a personal, friendly ‘thank you’ from a member of our team within 24 hours. Thank you.

Brilliant and shows the EU in their true form, petty, vindictive and totally incompetent.

That's why all the remainers and Eu fanatics wanted Britain to join the Eu med agency vaccine program.
To use British money and expertise to prop up the Eu program. That was a common theme over the decades.
If we were in the Eu program we would probably have around 3 million completed covid jabs by now.
The media would hail this as a great success,And only possible thanks to our Eu participation.
This is just one of the first Brexit successes.many more will come over the years.
Of course an independent country working in its own interests can well out perform the chaotic,malicious,over bearing Eu.
Are we gloating,No.
But we are happy and proud that Brexit Britain is doing well,As it always would do,But we must continue to work in our interests, that includes vastly improving the trade and cooperation agreement and making our freedoms work even better for the Uk.

Thanks most of us had the good sense to vote the U.K. out!
Thanks to the U.K. Govt for the foresight to fund the research, development, procurement of the vaccines & for the roll out program!

We should be grateful that their incompetence is fully on display, along with their petty vindictiveness (Article 16) & weaponisation of the GFA-breaking WA in pursuit of absolute power & Country status.
The lockstep progression to 'health' passports - papers please, including the UK, has been in progress for some time with the EU Roadmap showing that it's been planned since prior to 2018. The UK was still a full member. It's as if it was planned. Health passports 2022.
https://ec.europa.eu/health...
Anyone might think that the current 'chaos' has been deliberately created in order to progress the plans to re-order society & economies to the desired outcome, creative destruction. I do not exclude the UK Govt complicitness in these evil plans.
A couple of interesting observations re Verhoftwally's 'I should be your leader' tweet.
He's broadcasting in English. He speaks about 5 languages, & is never shy of demonstrating these in the EU Parliament. English is now only the primary language of EU member Ireland, a useful stick to wield threats over the UK. Yes, English was re-adopted as the main EU language, but it does seem to be aimed at the UK Eulings clamouring to rejoin the cult of EU.
Yet again, the EU is consistently referred to as Europe. It is not the same thing. It demonstrates their mindset, which has been uttered, that the UK 'belongs' to the EU.
Finally, he doesn't refer to the UK, but to Britain which excludes N.Ireland. It's as if N.Ireland is no longer considered part of the UK. He is not a stupid man. He knows exactly what he is saying.

The vaccines have not been fully tested. Some alter your DNA. Look up the UK Government's own figures on deaths and long term damage to people, after taking a vaccine. Truly shocking. And yet the vaccine programme is STILL being pushed by Johnson, Blair, Fauci, Gates et al.
True scientists, and these are not the Government ones, give a shocking analysis on what is happening the world over. Fear and propaganda are the order of the day. I will not subject my body to an untested, rushed through, DNA changing vaccine which is sponsored by multi millionaires who brag about reducing the World's population and the huge profits they stand to make.