Largest trading bloc in the world, by size, is USMCA (USA-Mexico-Canada), not the EU

By the common measure of GDP, the new US-Mexico-Canada deal dwarfs the EU27 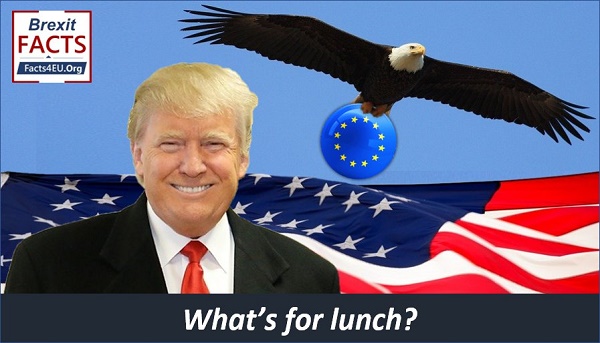 U.S. president Donald Trump took office in January 2017. Part of his election manifesto was to repudiate NAFTA (North American Free Trade Agreement) and to negotiate a new deal with Canada and Mexico.

Just 21 months after President Trump took office, in September 2018 the United States, Mexico, and Canada reached an agreement to replace NAFTA with the United States–Mexico–Canada Agreement (USMCA). All three countries had ratified it by March 2020. 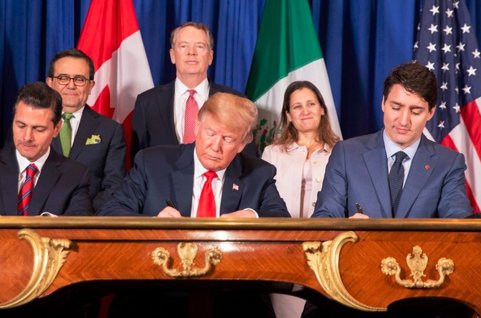 The USMCA deal being signed - © The White House

Meanwhile, the United Kingdom – the EU’s second-largest economy until it left the EU (in name only) in January - will complete the exit process on 31 December 2020 when it leaves the ‘Transition Period’ agreed by Theresa May and subsequently agreed and signed by Prime Minister Boris Johnson on 28 January this year.

The UK is still precluded by EU diktat from implementing trade deals such as USMCA.

The EU compared to USMCA

The EU is very fond of pretending to be a country, whereas in fact it is an association of 27 countries linked by various treaties, none of whose citizens have been given a vote about whether the EU should become a superstate in its own right.

Conversely, the USA, Canada and Mexico are real countries and they make no pretence of being one superstate. Each country contain states which have varying degrees of autonomy, but which all exist under national governments and whose citizens (or the vast majority thereof) recognise and respect the name of their own country. They remain independent, have their own independent courts, but have a new trading agreement.

So where does this put the EU in terms of its economic power?

The combined economic size of the USMCA versus the EU 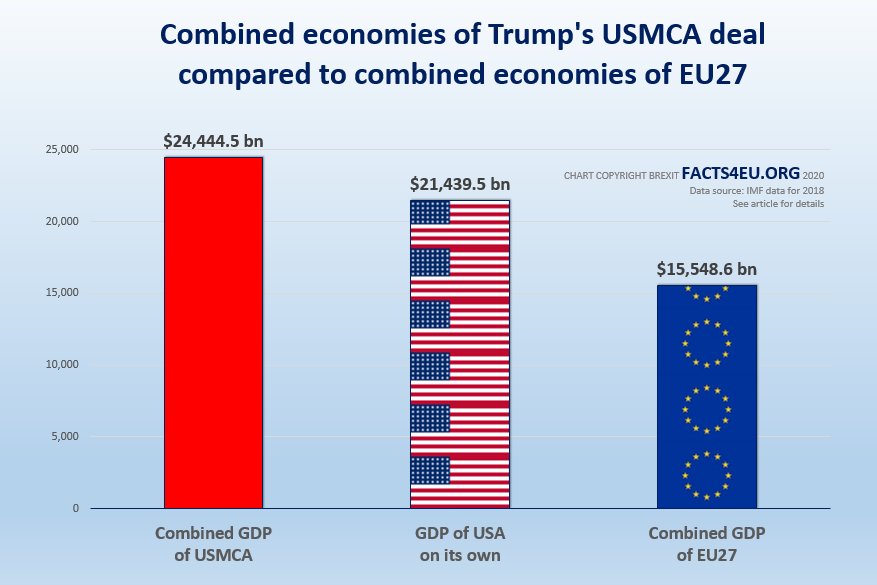 The EU likes to boast that it is the biggest at being many things. Listening to the regular pronouncements from Brussels one might easily imagine that the combined economic power of the member states makes it the largest ‘country’ in the world.

The new USMCA deal creates a trading bloc involving three countries with a combined GDP of more than $24 trillion. The EU27’s combined economy is 36% less.

What about the future…. and Brexit?

The EU27 is not only much smaller than the US, it also lags behind the US in its growth rate. The US growth rate in 2019 was 40% greater than that of the EU.

Added to the EU27’s woes is of course Brexit. In our report above we have shown the combined GDP in 2019 of the 27 member states, excluding the UK. This gives a more accurate comparison with the position today and indeed the EU Commission itself regularly reports on last year without including UK data.

In viewing the information provided, it must not be forgotten that the departure of the UK this year led to a devastating 15.0% fall in the combined GDP of the EU’s member states.

When the United Kingdom is at last free of the EU’s shackles on 31 December 2020 it will finally be free to sign and implement its own trade deals with the rest of the world, and to set its own tariffs for ‘Most Favoured Nation’ status under WTO rules.

One trade deal which looks increasingly likely will be the UK joining the Comprehensive and Progressive Agreement for Trans-Pacific Partnership (CPTTP). If this happens then the CPTTP grouping will snapping at the EU’s heels for second place in the world rankings. If readers would like to know more about this exciting opportunity, please let us know in the comments or email us. Better still, help to fund this research report with a donation today and we will publish on Saturday!

Quick, secure, and confidential donation methods are below thius article. Thank you so much if you can help us to keep going.

[ Sources: IMF | The White House | Office of the US Trade Representative | Statistics Canada | Mexican National Institute of Statistics, Geography and Informatics (INEGI) ] Politicians and journalists can contact us for details, as ever.

Barnier and France are playing the offended party ever more loudly this last week. Heaping blame on the UK for not dancing to their tune and compromising.
There is an inability on their part to understand the facts of life.
Legally under International Law the United Kingdom returns to being an Independent Sovereign Coastal Nation on 1st January 2021.
All powers handed to the Brussels Administration are rescinded.
Why would we wish to extend the transition period?

For the consideration of the remainer's & rejoiner's. Does the information contained within this article give you any food for thought about staying in the EU? Are we better on our own or within the EU 'club'? I can tell where we are better off! So can 17.4 million other people! You?