Brussels latest: EU’s youth indoctrination project will be complete by 2025

Should the UK continue paying for the ‘Juncker Youth’ and other programmes from Brussels for Generation Z? 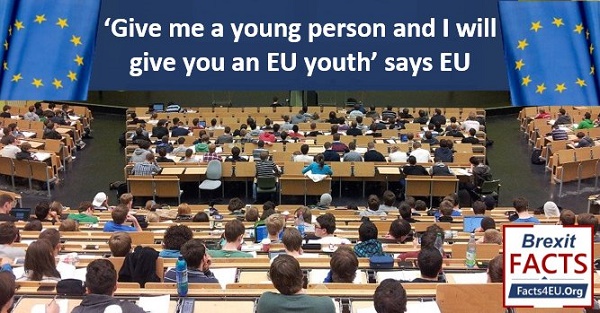 Last week the EU Commission announced that it will be completing a “European Education Area” by 2025, thereby moving one further step towards the homogenisation of the formerly independent nation states of Europe.

For years the EU has been achieving its goal is by targeting young people with continuous propaganda and ‘initiatives’ as we have reported many times before. Here is what they say about their latest move:-

“The European Education Area is underpinned by six dimensions: quality, inclusion and gender equality, green and digital transitions, teachers, higher education, a stronger Europe in the world. Initiatives will inter alia look at ways to enhance quality, notably with regard to basic and digital skills and to make school education more inclusive and gender sensitive and improve school success. They will help strengthen understanding of climate change and sustainability, foster the greening of education infrastructure, support the teaching profession, further roll out European Universities and enhance connectivity among education and training institutions.

“The Communication sets out the means and milestones to achieve the European Education Area by 2025, supported by Europe's Recovery Plan (NextGenerationEU) and the Erasmus+ Programme.”

What does this mean?

Worryingly, post-Brexit the Government of Boris Johnson still seems determined to continue paying into the EU’s self-serving and wasteful ‘Erasmus+’ programme. If the Government is trying to appeal to the youth vote, there are much better and more efficient ways to achieve this.

An important part of educating young people is by imparting facts, to inform and hone their decision-making processes. However, when the majority of the teaching profession is anti-Brexit and ‘woke’, there could be a problem. 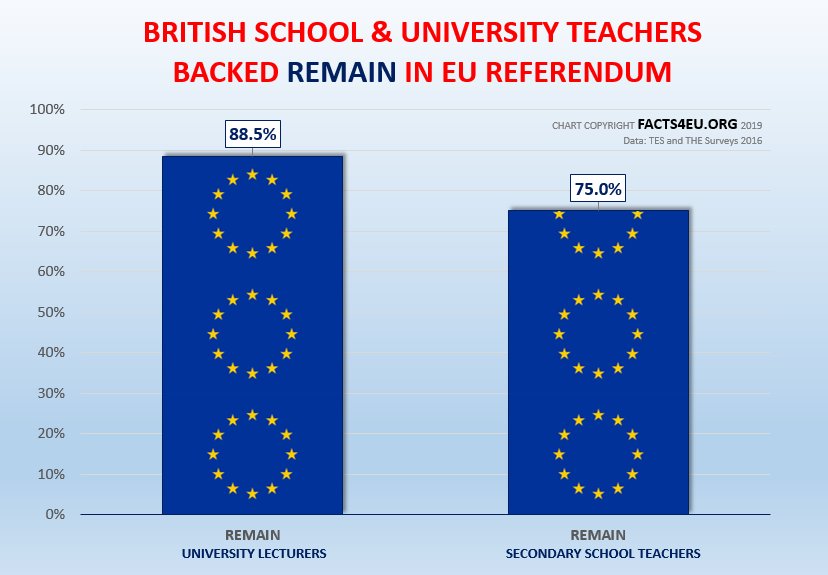 Above is how the teaching profession voted in the EU Referendum, according to the Times Educational Supplement survey at the time. 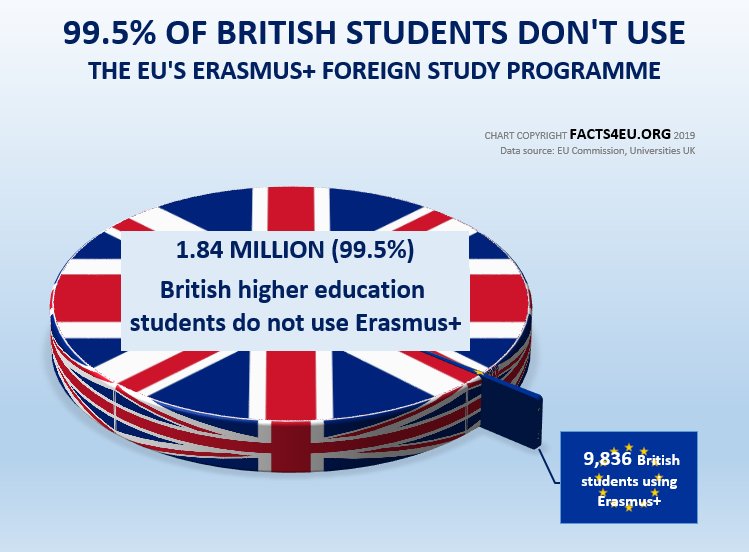 Only 0.5% of UK higher education students use the EU’s ‘Erasmus+’ study programme.

One example of the build-up of the ‘European Education Area’, which the UK has been paying for

One part of the ‘European Education Area’ is called the ‘European Solidarity Corps’. Given that it was founded under the reign of the previous President of the EU Commission, we have always referred to this as the ‘Juncker Youth’. It started in 2016 but the EU's legislation didn't follow until two years later. Here is what the EU says about it:-

“The young people who participate in the European Solidarity Corps will all agree with and uphold its Mission and Principles.”

“The European Solidarity Corps was first set up by mobilising available EU funding from different programmes, including Erasmus+. The regulation that established the European Solidarity Corps (adopted 2 October 2018) made it a as a stand-alone programme that now benefits from its own budget. With a budget of €375.6 million for 2018-2020, it offers opportunities to young people to carry out volunteering activities, traineeships and jobs and run their own solidarity projects.”

This law gives legal effect and a large budget to a programme of activities for young people prepared to commit to a ‘solidarity’ pledge to the EU. The planned budget for the period starting 2021 has been put at over €1 billion.

Here is the opening paragraph of the EU’s law:

“Solidarity among Union citizens and among Member States is one of the universal values on which the Union is built. This common value guides the Union's actions and provides it with the necessary unity for coping with current and future societal challenges, which young Europeans are willing to help address by expressing their solidarity in practice. Solidarity also stimulates young people's interest in the common European project.”

Note that the opening paragraph of the new law starts with the overriding reason for the ‘Juncker Youth’ – to get young people expressing ‘solidarity’ and ‘unity’ with the unelected EU Commission’s self-declared ideals.

Very few young people have actually participated in a project

According to the EU Commission, whilst 175,000 registered their interest in the European Solidarity Corps, only 30,000 young people have actually gone ahead and particpated in an activity.

What are these small number of young people doing that is costing so much money?

Below are some examples from the EU's own literature:-

“Charlotte Dumoulin from Belgium is volunteering in Helsinki, Finland in an organisation promoting peace, equality, anti-racism and dialogue. Charlotte is working with youth workers to help them overcome their prejudices in their work.”

“Vladislavs Jelisejevs from Latvia worked in Dumbravita, Romania in the project ‘European Diversity in Human Unity’ in which he focussed on delivering non-formal education to students of all ages, in and around the city of Baia Mare.” 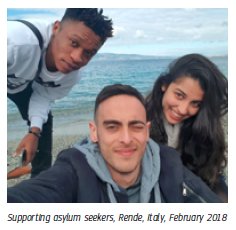 For years we have been deeply troubled about the standards of education and the indoctrination of our youth by educators whose political opinions do not reflect the views of the majority of the population.

In particular we have been worried by the EU’s insidious and ever-growing initiatives to brainwash an entire generation into believing its propaganda. With Brexit, we expected that at least the EU’s efforts in this regard would no longer be supported by UK taxpayers’ money. If the Government of Mr Johnson participates in any way in the EU’s youth propaganda machine, and continues to fund it, we shall have a great deal to say on the matter.

Boris Johnson set a new deadline of 15 October 2020 for the conclusion of the UK-EU trade talks, which bizarrely include items such as the UK’s participation in - and payment for – various EU programmes such as those outlined above. Readers will recall that Mr Johnson’s original deadline was back in June.

As with all other Brexit ‘deadlines’ it seems that this one will also be extended. No.10 is now only talking of having the ‘essence of the deal’ agreed by the 15th, which is in one week’s time.

We suggest it would set a powerful marker if the PM walks away from the negotiations on Thursday next week, assuming the EU has failed to back down from its ridiculous demands. None of these demands exist in any other trade deal which the EU has struck, and no self-respecting independent country around the world would accept them.

We repeat our advice to the Government:-

And let’s please not have any nonsense about staying in (and paying for) the EU’s youth propaganda programmes. Far more UK students go to the USA as part of their studies than to any EU country.

Our young people will always be independent and will vote with their feet, as they have done for decades. Let’s not waste anything more on the EU. Students were able to study in Europe before the EU started trying to control everything. We are sure that ways will be found for this to continue, but this should not involve signing up to the EU's profligate schemes of self-promotion.

In these final days and weeks before the UK exits the European Union, the team at Brexit Facts4EU.Org has a great deal to do. Please support our work with a donation today. We have no foreign billionaires backing us, just you, dear readers. These are critical times and we could do so much more if we had more funding. Unlike the eurocrats in Brussels we have no secretaries, limos, or expense accounts. We just need some money to survive.

Quick, secure, and confidential donation methods are below, and you will receive a warm email from a member of our team if you can help us. Thank you so much.

[ Sources: EU Commission | Times Educational Supplement | Universities UK | HESA ] Politicians and journalists can contact us for details, as ever.

When you choose the unelected unaccountable to be leaders, and then make them immune from prosecution, EVIL is the outcome !!, you would think that the EU would have learnt such a lesson from 1930's germany, but alas !!

Our education system also needs to be rid of all of the 'Monnet Professors', the EU embedded propaganda 'educators'. There is no longer any justification for their continued existence (& payment) other than to undermine this country's independence & promote the interests of a foreign power. Students wishing to learn about the EU can go there, just as students wanting to learn about Russia go to Russia, or America go to America etc.
The 'European Solidarity Corps' is deeply sinister & it's rationale becomes more evident as we watch the current global push to impose 'the great reset', in lockstep.
_
If 'magic' Johnson thinks that people will be fooled by another suddenly 'amazing' last minute deal, & that anyone trusts the EU, he is sadly mistaken. Any 'deal' before we've completely left, when you consider that it's ONLY supposed to be about trade, will cede elements of our sovereignty without the people's consent. That's unnacceptable.
What truely concerns me is what are they 'hiding' from us, that they remain silent on? The so-called 'programmes' (or should that really be programs?) for 'participation' but will require us to remain under their influence whilst paying for the 'privilege'. We hear nothing more than 'we will participate' in Defence, Security, Law Enforcement, Education & scam 'Green' agendas etc but not once have they explained the actual impact on our sovereignty nor the 'influence' that will restrict our Govts actions to act solely in the UK's interests that these might have, nor the scope of potential influence creep. Much like the 47 years' 'creep' of EU power in our membership.

The only way that we, the people, can be sure that we are not being screwed by EUlings in our 'own' side is a clean break, particularly given the sheer number of EU agents still in positions of power . No WA, WTO. We could call it 'the clean reset'.
Then ensure that Parliament can never again give away what is not theirs to give, our sovereignty & democracy, without the express permission of the people.

Where have we heard that before..

They cant see it though. They cannot believe it's not their own free thinking! Strong of mind are the ones who go through the system and come out true free thinkers!

The wording is different - “The European Education Area is underpinned by six dimensions: quality, inclusion and gender equality, green and digital transitions, teachers, higher education, a stronger Europe in the world.
It is written in the vague and all encompassing wording of today.
Its meaning and purpose is clearly reminiscent of Europe of the 1930's

Rings a bell, haven’t we been there before?

One immediately thinks of the Duke of Edinburgh Award scheme ! However, it shouldn't but it does, have a somewhat sinister undertone, highly political, indoctrinating, militaristic almost, ( particularly with the given name ) a pledging of allegiance, almost saying you can't join / we don't want you unless ..... Hmmm. Will reserve judgement for now.

UK teachers have been warned against pushing political views on children with the aim to manipulate and shape their views haven't they?