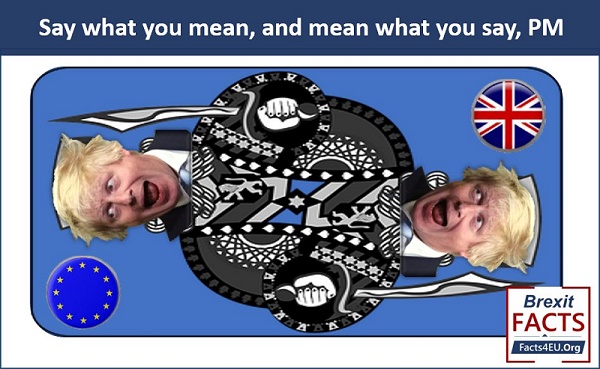 This is a national disgrace

Today is the deadline the PM set for a trade deal with the EU. To quote him directly: “If we can’t agree by then, then I do not see that there will be a free trade agreement between us, and we should both accept that and move on.”

Yesterday all that changed. A Number 10 spokesperson said that the Prime Minister would “take a decision on next steps following the European Council, in light of his conversation with President von der Leyen, and on advice from his negotiating team”. 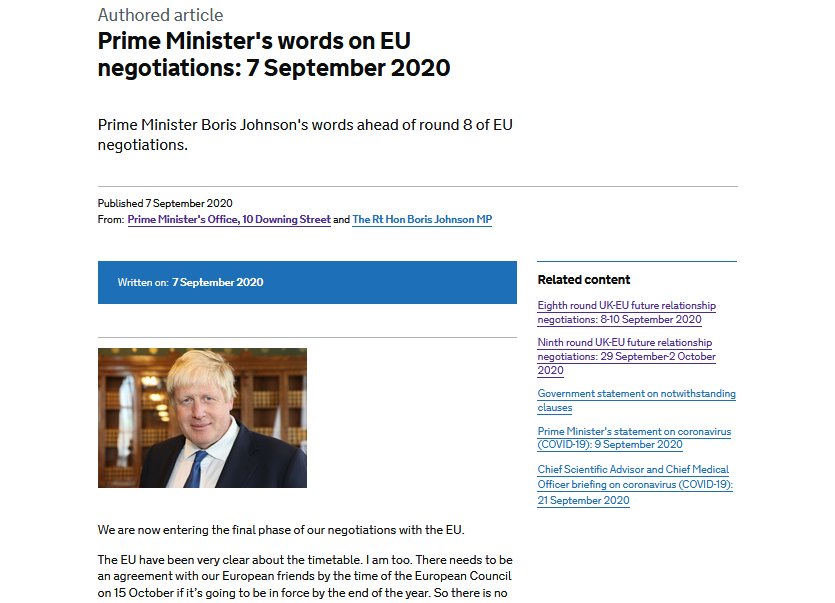 “We are now entering the final phase of our negotiations with the EU.

“The EU have been very clear about the timetable. I am too. There needs to be an agreement with our European friends by the time of the European Council on 15 October if it’s going to be in force by the end of the year. So there is no sense in thinking about timelines that go beyond that point. If we can’t agree by then, then I do not see that there will be a free trade agreement between us, and we should both accept that and move on.

“We will then have a trading arrangement with the EU like Australia’s. I want to be absolutely clear that, as we have said right from the start, that would be a good outcome for the UK. As a Government we are preparing, at our borders and at our ports, to be ready for it. We will have full control over our laws, our rules, and our fishing waters. We will have the freedom to do trade deals with every country in the world. And we will prosper mightily as a result.”

Took stock of negotiations with 🇬🇧 in a call with @BorisJohnson, together with @eucopresident.

The EU is working on a deal, but not at any price. Conditions must be right, on fisheries, level-playing field and governance.

Still a lot of work ahead of us.

We discussed #Brexit with @BorisJohnson and @vonderleyen

On the eve of the #EUCO we pressed again for progress to be made at the negotiation table.#LevelPlayingField #Fisheries #Governance

Boris blinked. You do not do that in negotiations or you are finished. They are now laughing in Brussels.

There’s an old adage: “Say what you mean, and mean what you say.” If you set a deadline, stick to it. If you set red lines, stick to them.

Regrettably Boris Johnson now has a firm track record in backsliding on his commitments towards Brexit. He committed to leaving the EU by 31 October. He failed, albeit with a Remainer Parliament. He then committed to moving to trading on WTO terms if negotiations for a free trade deal had not been completed by the end of June. He backtracked. Then it was the end of July. He backtracked again. Then it was 15 October. And he has failed again.

Little wonder that the EU officials in Brussels have never taken his words seriously.

Yesterday on social media Brexit Facts4EU.Org conducted a poll. We asked: "If Boris extends his deadline to the EU tomorrow, whether you want a deal or no deal, how will you feel?" Given the choice between "Content" and "Betrayed", 90.5% of responders answered "Betrayed".

Any serious observer of EU politics over the years knows that negotiations in Brussels always go to the wire – and in many cases they go into the early hours after the wire has been crossed.

The point here is that people and businesses have to plan their lives around the final outcome of these talks. Four and a half years is long enough. This is not something that can be left until midnight on 31 December - or even next month. We have just 78 days (11 weeks) until the UK leaves the Single Market and Customs Union. For many people and businesses even that time is not time enough.

Boris Johnson unilaterally put a line in the sand and made mid-October the date by which the UK would proceed on a WTO basis if an agreement with the EU had not been reached.

Sadly it appears that Boris’s line was drawn in quicksand.

Let’s be clear. Were it not for COVID, today’s headlines would have slammed the Prime Minister for his weakness and vacillation and for making the UK look like the supplicant in a master-servant relationship.

We must call it as it is. This is a national disgrace.

The United Kingdom's future as a free, independent, and sovereign country is at stake here. Please help us to keep fighting by making a donation today. We desperately need the resources to see this through to the end. Quick, secure, and confidential donation methods are below this article, and you will receive a warm 'thank you' email from a member of our team.

[ Sources: No.10 | EU Council | EU Commission ] Politicians and journalists can contact us for details, as ever.

Stand by for betrayal!

I'm not concerned if it is extended!! As long as we don't compromise on sovereignty.

Yes its been a dogs breakfast ever since Cameron announced his resignation because he lost, we lost under May and the WA and now under Johnson. The WA should have been scraped to the rubbish bin. I think Boris days as PM are very limited if he capitulates to the EU

Boris is showing his true colours. He will capitulate and the country be let down by yet another useless politician. He only succeeded to PM by borrowed votes. Voters who would not normally vote for this party, trusted him to keep his promises, well now he has lost that confidence and could pay the price with lost support at the next GE.
He must go NOW !

And who replace him Wes? Starmer?

Us staunch brexiteers who lent their vote will be fuming about backing down on deadlines given but we have to keep the faith. We are out whatever and Boris has done that, he has to be seen to be doing everything he can to get a good deal, even if he doesn't want to. The remainiacs, left and media will tear him down if not. Boris or Dom will not let his country down.

So Macron blinks first and using the excuse of Covid locks France up for a month to push Brexit beyond the USA Election . . . and the EU Trojan Horse "Boris the Remainer" looks like doing the same with the UK from half term . . . form Your own conclusions . . . but looks like Brexit is off to me!!

Typical of the EU they are putting off decision making. They cannot accept that the UK has regained its sovereignty, they are no longer in control.
They keep making demands on compromises which they are not prepared to make. Its all one sided.
Stodgy Merkel will try and make a fudge on the UK's fisheries offer. This is limited by the new Fisheries Bill which has sustainability as the prime objective and ensures that fisheries management decisions do not compromise environmental sustainability in both the short and long term. An aim lauded by the EU.
Is there going to be a trial of strength between Macron and Merkel. Will Macron do a deGaulle and pull the plug?
Eastern Member States are more concerned with 'the rule of law than fisheries.
Boris Johnson will be foolish to allow the non-negotiations to drag on to the inevitable NO deal.
Germany is struggling to agree coronavirus measures.

I think he'll make a speech that's full of his customary big words and archaic language,that when translated means he's shafted us. I hope I'm proved wrong ,but when was the last time a politician did what was right for the country, and not for themselves?