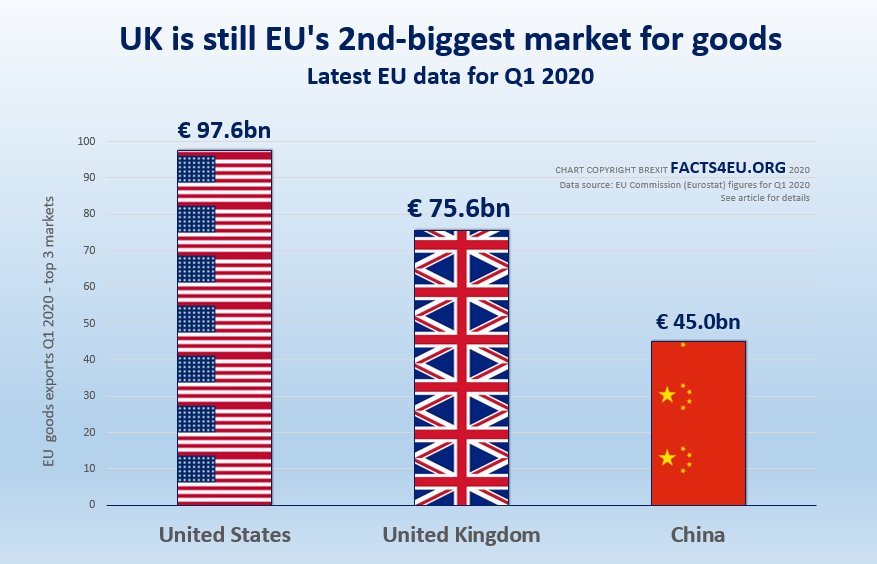 The EU tries to airbrush out this fact, as usual, in its latest Q1 2020 figures

Below is the table issued by the EU on Friday (15 May 2020). It shows the EU’s “Main Trading Partners”. The reality as far as most of its citizens are concerned, though, is different. Firstly, we show the EU’s version.

The emphasis of the EU’s report which it released on Friday – as can be seen below from the title of its document – is clearly on the EU’s trade surplus with the rest of the world, which now includes the UK.

The importance of UK market to the EU

Sadly, when it comes to ranking countries with whom the EU trades, the EU Commission prefers :-

Instead it adds imports together with exports which puts China (marginally) above the UK. However, in the first three months of this year (2020) :-

Finally, here are our revised tables for the EU Commission

We have recreated the EU’s table, and sorted it in two ways. We think these better reflect the true “international trade in goods surplus”.

We start by sorting it by the trade surplus itself, as this is what the EU’s report was supposed to be about.

And here is the table again, which we have sorted by “biggest customer”.

Readers can see for themselves that in the first quarter of this year the United Kingdom continues to be the EU’s second-biggest market for goods, dwarfing that of China. Readers can also see that the EU continues to earn a huge trade surplus from the UK.

"Call yourselves a facts organisation? This is just fake news."

Each time we produce positive information like this, showing how the United Kingdom is an important country to the EU and to others around the world, we are attacked - often in not particularly pleasant terms. We report on news like this because if we didn't, anti-Brexit campaigners would be able to continue to persuade the British public that the UK is some insignificant little backwater.

The United Kingdom does of course have one of the largest economies in the world and wields significant influence on the world stage. (Not that you would know it, if you watch the BBC or Sky News, or listen to an FCO civil servant.)

If this were not true, why is it that 4.5 times the number of EU27 citizens have come to live in the UK than UK citizens going to live in the EU27? [From official EU data.]

For anti-Brexit campaigners, we will simply stress that once again we have used the EU’s own latest figures, released on Friday. We have even replicated the EU’s own table. If you don’t like what this is telling you – and if you hate your own country so much that you want to belittle it at every opportunity – then we suggest that you take this up with the EU Commission, not us. (While you’re talking to the Commission in Brussels, you might also want to consider applying for Belgian citizenship at the same time?)

Looking at the EU’s latest export figures it’s no wonder the EU’s ideological zealots want to keep the UK in its current EU colony status, by extending the “Transition Period”. And it’s no wonder they then want to tie the UK into a one-sided trade agreement which would make the whole of the UK subservient to the EU’s laws and policies for a generation.

We would suggest that these latest trade figures from the EU provide yet another reason why the United Kingdom must stand resolute. The Government is right to say that the EU’s current position in the trade talks is untenable and that no country in the world would agree to the EU’s terms. Indeed we don’t think any other country in the world would have signed the Withdrawal Agreement in January, and that this should be repudiated if possible.

In any event we must exit the EU completely, as soon as possible and at the latest by 31 December 2020.

If you found this article interesting and useful – and let’s face it, you won’t see this official information on the TV – can you please help to keep us going with a donation? Quick, confidential, and secure donation methods are below. Thank you so much.

[ Sources: EU Commission statistics agency | ONS ] Politicians and journalists can contact us for details, as ever.

Once again, Pro-Brexit Facts4EU produces an excellent article after recreating facts as they should have been presented by the EU.
We forever see the EU attempting to cover up these matters as though it was a country, and the UK didn't exist (such is the EU's desire to obliterate national pride and traditions).
The EU still attempts to fool citizens across the continent, so TIME THEY WOKE UP TO REALITY?
I suggest, shame on the EU commission for misrepresenting the truth, and shame on the likes of the BBC and others for their dismal failure to broadcast actual facts researched by Brexit Facts4EU.
To all Brexiteers out there, we need to step up several gears to assist and support the Facts4EU team - think what you'd do without their expertise? Remoaners still attempt to keep us locked into what I consider is a corrupt and extremely expensive EU institution, and it's reasonable to suggest remoaners don't care about our great country and what we stand for, even though we've legally left the EU.
-
At times like this, it is perhaps worth reminding UK Prime Minister Boris Johnson of his own words during his breakfast.
In a previous Facts4EU article with video (duration: 91 seconds), Boris clearly reminds us of his promises that we expect him to uphold - words he must NEVER forget.
The Facts4EU article may be found here: https://facts4eu.org/news/2...

I completely agree with the last 2 commenters. This article is factual and it presents us as we are which is a very important trading partner for the eu. They can pretend all they want but sooner or later they must confront the truth mustn't they? Well done facts4eu for doing the work on this and i hope the bbc sits up and takes notice.

BUY BRITISH...We dont NEED most of the stuff we buy...🤔

4. Sue W - how true! When one looks around at all the plastic junk and junk food available, one soon realizes that the real elephant in the room, is waste. We waste so much of literally everything. I am totally convinced if we cut the waste we would be a lot better off!

Second biggest customer? They have a funny way of showing their appreciation.

And remember to add how much we spend on holidays in EU countries.

Fine, I'll be looking for imports from our American and Commonwealth friends and boy cott as many as possible from the EU.

Well done facts4eu.org you are telling the truth i voted to leave the then Eec in 1975 and 23rd june 2016. i voted to LEAVE .. the corrupt eu. it is Not a country all they want is the uk tax payers money. We must NOT extend beyond 31st dec 2020.
Look how they treated italy. Spain. Greece etc over covid 19
Germany. . Holland. France. Tried to block
Millions of €s to help there so called eu states. I think Italy may come out of the eu
In the next 3 years
Happy Brexit to you All 🇬🇧🇬🇧🇬🇧🇬🇧🇬🇧

Isn't this just typical seen in the Express today: "BRITONS have told Ursula von der Leyen to "mind your own business" after the European Commission President provided Nicola Sturgeon with a huge boost in her desperate pursuit for Scottish independence."
I agree 100% with you 9) David storey. I sincerely hope Italy comes out too and the Scandinavians. Let Scotland join, they won't be in long!