“President Trump, the EU is boasting about making trillions from the USA” 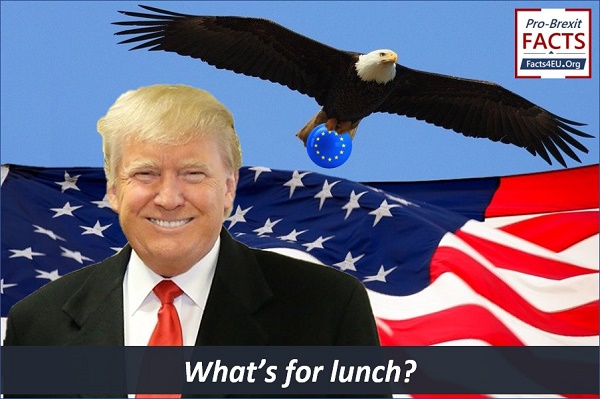 UK-US goods trade is in balance, but EU-US trade only benefits the EU27

Brexit Facts4EU.Org once again lifts the lid on the EU’s trading arrangements with the rest of the world.

In this case we are focusing on the trade statement just released by the EU Commission, regarding trade with the United States of America for 2019. Bizarrely the EU is now boasting that it makes over one hundred and fifty billion each year from its massive trade surplus with the USA 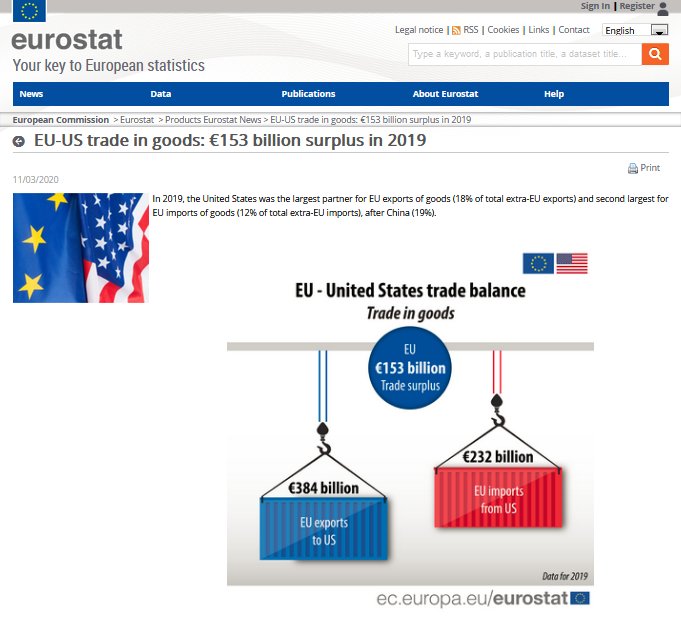 On Wednesday this week (11 Mar 2020), the EU Commission released a report on the EU27’s trade with the United States in 2019. This report was published in the usual way via the EU Commission’s statistics agency, Eurostat.

NOTE: All figures below relate to the EU27, ie without the UK, as this is how the EU itself presented the information last week. To confirm, these figures come from the EU and we present the US version further down this article. 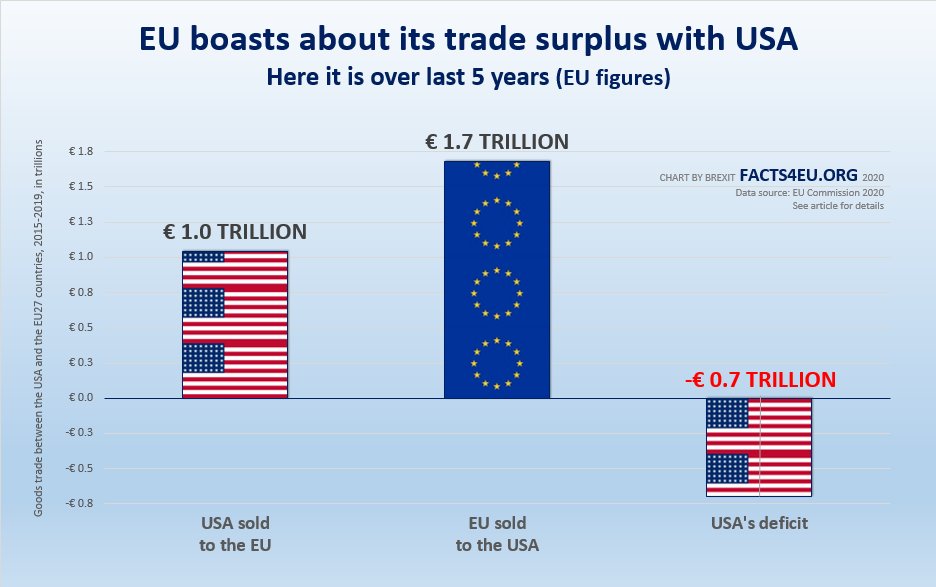 The question for President Trump must surely be “Who loves ya, baby?”

Whilst the EU27 have been enjoying a distinctly favourable trading relationship with the United States, with ever-growing profits for the EU year-after-year, the UK and the US have been trading goods broadly in an equitable way.

UK-US trade in goods is broadly in balance

Here we switch to official US Dept of Commerce figures, and we switch to US Dollars for the benefit of our American readers. 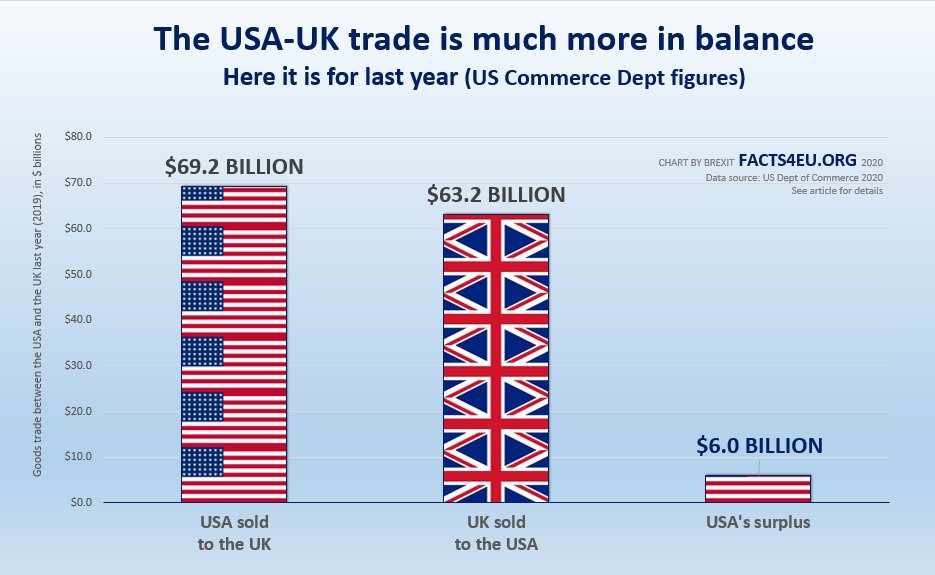 Source: US Dept of Commerce - International Trade Administration, data for 2019

The picture is healthy between the USA and UK, but what about the EU?

Brexit Facts4EU.Org punched the numbers from the US Dept of Commerce, as well as looking at additional information from its International Trade Administration and from The Office of The United States Trade Representative.

Specifically we wanted to know – from official US figures – the size of the deficit in merchandise trade between the US and the EU27 countries.

In fact the figures are even worse than those which the EU boasts of:-

Source: International Trade Administration of the US Dept of Commerce, Mar 2020

The simple fact is that the United States runs a massive annual deficit with the EU in its trade of goods. As we have reported on many previous occasions, this massive deficit has always been down to the other major EU economies, not to the UK.

Now that the EU has started reporting on statistics for previous years as if the UK had never been a part of the EU, these facts are becoming ever starker.

We still find it extraordinary that the official statistics agency of the EU Commission is now reporting on figures for 2019 and earlier as if the UK had not been a member, but there we go. The EU mentality has always resembled that of the totalitarian Soviet Bloc. It seems the UK is now being airbrushed out of the history of the EU.

Mr President, you know who America’s real friends are

We read “The President’s 2020 Trade Agenda and Annual Report” published on Feb 28. We noted how this report put the United Kingdom above the European Union :-

“United Kingdom - As part of a trade agreement with the UK, the United States aims to achieve a fairer and deeper trade relationship with the UK by addressing certain tariff and non-tariff barriers and agreeing on high-standard rules.

“European Union - For many years, U.S. businesses have been at a disadvantage in doing business in the EU. In a fair trade agreement with the European Union, the United States seeks to eliminate EU barriers to its markets and seeks a more balanced trade relationship.”

We can only imagine what the President must be thinking as he sees how the EU is now boasting of its massive and growing trade surpluses with the United States.

Oh no, here we go again!

As ever, we are forced to make an appeal for your support. We have no corporate sponsors. Since before the EU Referendum we have relied on you to be generous.

We have researched and published more than any other Brexit organisation

[ Sources: EU Commission - Eurostat | US Dept of Commerce - International Trade Administration | The Office of The United States Trade Representative ] Politicians and journalists can contact us for details, as ever.

The EU Commission will no doubts choke on their cornflakes after reading this article - and so they should, for the EU have again been exposed!
In my considered opinion, the EU27 will sooner or later get 'slapped down' by the US for their extremely unfair trading.
As clearly shown in the above charts from official data, UK-US trading is "much more in balance".
The EU, as always, don't understand what the meaning of fair trade is?
(As an aside, the sooner the EU get rid of Mr Barnier, the better - from a UK perspective).
The EU persistently moan and demand a 'level playing field', but as clearly shown above, the EU is all about, 'me', me, me'.
In a sense, we may see the final end of the EU, as the EU27 decide to put their own national identity first during this outbreak, over and above the EU federalist political project which is a million miles away from democracy.
The peoples of EU countries may wake up and ask themselves - 'WHY are they pouring THEIR money into the bottomless EU pit' when they badly need their own money?
UK life is looking so much better outside the protectionist EU trap, and ITALEXIT looks ever more likely after the commission ignored them?
I wish our American friends well.

Oh I do pray and hope that Corona is the crisis that broke the camel's back so to speak when it comes to the various stuidities of the EU, the worst offender being Schengen followed swiftly by the Lisbon 'treaty'.
Historians will look back on the EEC as an opportunity and the EU as a disaster for European countries. I already regard the whole 47 period as a disaster for Britain in particular up to now. Other European nations will soon realize that the EU is a absolute waste of resources, finances, time and effort. The 27 separate nations are or would be much better off without the Euro which benefits Germany more than anyone else.

in the unlikely event of the Coronavirus being on a par with the Plague of the 1600's all Countries should be Working together ,remember the EU has always had a sneering arrogant attitude towards Britain & the USA two Nations who lost a great deal of good Men saving these ungrateful buffoons, if it was not for Our Tommies and the GI's along with the rest of the participants the EU would still be run by Fascists today