A fascinating look at the EU’s latest figures 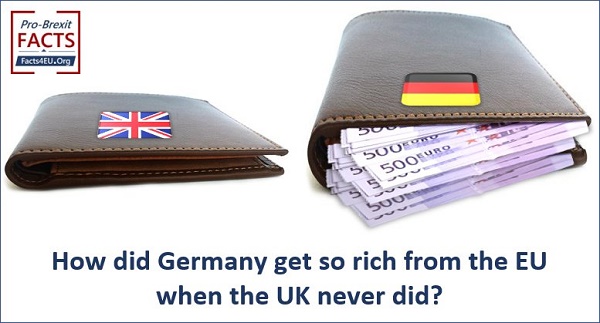 “You don’t need to speak German to buy a Bosch”

One EU country – Germany – now represents 25% of the total EU27 economy. How did it get so large?

In this simple but unusual Brexit Facts4EU.Org report, we look at the absolute basics of the UK and German economies. In particular we consider the question:

Why has Germany got so rich from the EU, but the UK has not?

(If you are an economist you might want to look away now.)

A recent publication from the EU Commission’s statistics agency listed the latest breakdowns of EU member state economies by sector. Below we show the massive difference between Germany and the UK, when the respective economies are broken down into the services and the industry/construction sectors.

Why Germany won the economic war in the EU 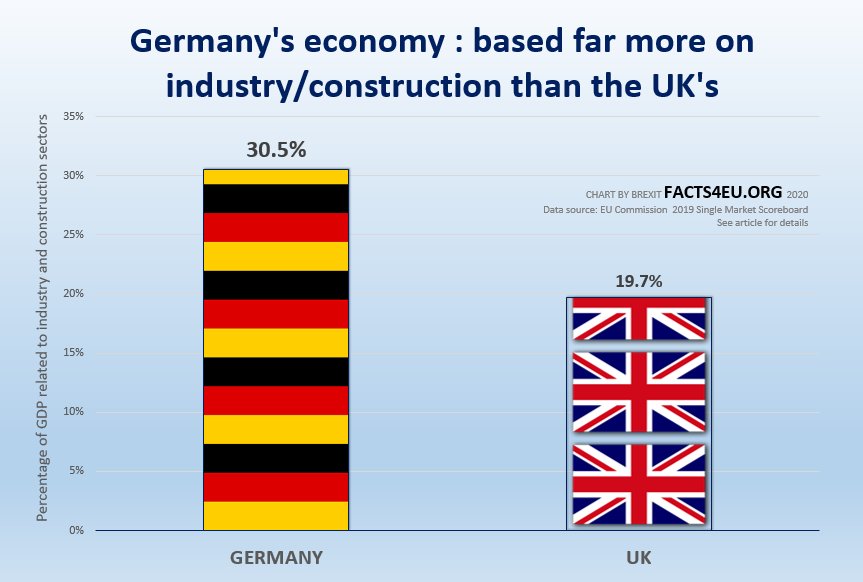 The natural corollary of the above is that
the situation is vastly different for the service sector of each country’s economy. 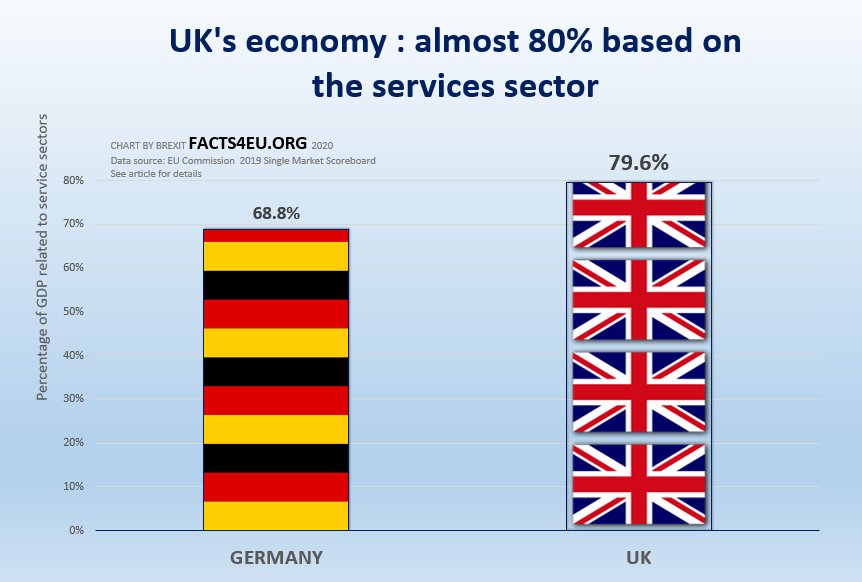 In the case of agriculture, this is broadly similar for both countries, standing at 0.7% for the UK and 0.9% for Germany.

The EU has given Germany’s industrial machine some considerable advantages. Since the creation of the Customs Union, Germany has been able to sell its industrial output to its neighbours without tariffs. The creation of the Single Market also meant that common product standards could be applied.

Furthermore, Germany’s products have been protected from the competition of cheaper imports by the tariffs the EU imposes on products from other countries around the world.

In addition to this, the establishment of a common currency (the Euro) in 1999 has had the effect of keeping German prices lower than they might otherwise have been.

How Germany now dominates goods sales in the EU

Our final chart is perhaps the most dramatic of all. It shows, using official EU data as ever, just how much Germany has been able to build its economic success by selling to the rest of the EU. 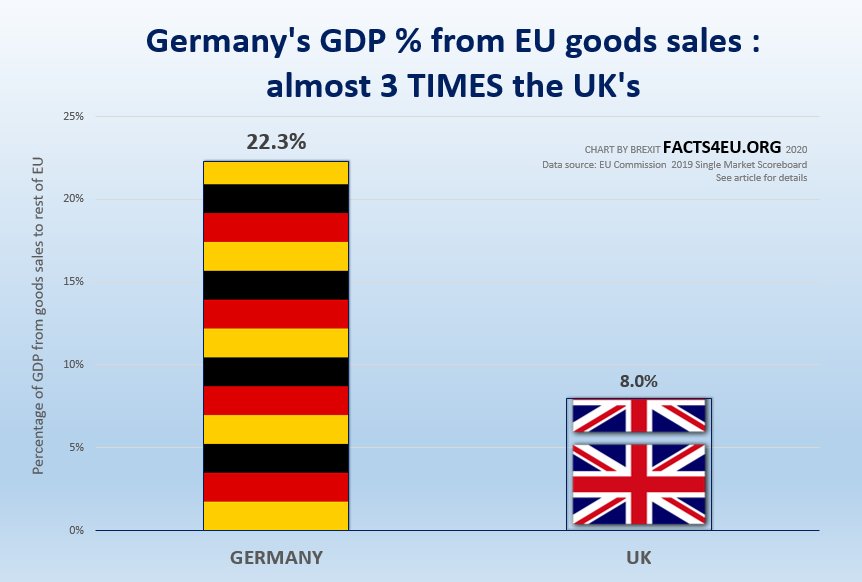 Hasn’t the UK benefited too?

It is of course true that in theory the UK was also able to benefit from the Customs Union and Single Market. There are, however, a couple of major differences.

Firstly, as we have demonstrated above, Germany’s economy is slanted much more towards goods than services. Sadly – and as we have reported many times – the EU itself admits that the Single Market does not work for services. This massively handicapped the United Kingdom.

It must also be said that the provision of some services is more reliant on the seller and buyer speaking the same language. It is a simple fact that you don’t need to speak German to buy or use a Bosch washing machine or cordless screwdriver.

Whatever the reasons, one thing is for sure

The EU has benefited the German economy far more than it is has the UK’s economy – and it has done so for decades. We will leave readers with one final statement from the EU Commission.

Official: UK benefits least from the Single Market, out of all 28 EU members

“We’ve left haven’t we? Why is any of this relevant?”

(Typical comment we get from Remoaners on social media.)

The United Kingdom is still in the EU’s Single Market and the Customs Union. The EU is playing hardball – as one would expect – in the current trade negotiations with the UK.

We think that British negotiators need to remember the basic facts before the start of each round of negotiations. The rest of the EU – and Germany in particular – has done very nicely thank you out of the UK’s membership of the European Union in the last 47 years.

Let’s not forget that.

Finally, would you mind if we made an appeal for your support? We have no corporate sponsors. Since before the EU Referendum we have relied on you to be generous.

The EU was always created to benefit a select group of countries.Britain was not one of them.In fact it was decided that Britain would pay to help the others and have its power and independence vastly reduced.
They would send and we would import vast amounts of workers to keep things ticking.
Many mp's, departments,councils,
Schools and universities were paid of to allow this to happen by stealth.
These are all the reasons why Britain lost its mines,manufacturing,
Steel,fisheries etc etc.
We have also given many hundreds of billions of pounds during the 47 years membership.
80% of that money we never see again.
With the UK's genuine exit from the EU (if we get it)
They are ruined.
I just hope the good people of the EU nations can be helped and saved again! At the end.

In addition to the items in Germany's captive & protective market, if an investigation were to be made into the allocation of EU funds for infrastructure & improvements it might well be found that these appear to indirectly support German industry as they seem to primarily be to improve transport links for the German market or enhance area infrastructure where Germany has moved production to. Maybe our venerable well-funded national fraudcaster could investi....Oh, silly idea!

Thank you Ashley (1), you encapsulate what I have believed since the EEC morphed into the EU. Even before that I could see that other European nations were benefitting more from membership of the Utopia club. Now today all is out in the open, their tactics, their tantrums and their 'negotiational' skills.
The only 'deal' was no deal, something our establishment (seen and unseen) are desperate to avoid for they might upset their globalist masters.

I have said for decades that the EU was deliberately sectioning off the various countries (i.e. states) of the union. It didn't take the brains of a rocket scientist to see it, e.g. France gets car making and agriculture, Germany= manufacturing and heavy industry, Holland and Spain = fishing, Italy = luxury goods, Luxembourg = banking and tax revenues from global conglomerates/multi-national companies. The rest of the basket cases like Greece, Bulgaria, Romania, etc, are just countries for the likes of Germany to sell to without the agro of customs and duties. The UK however, has been decimated time and time again until something like our fishing fleet is now a mere morsel of what it once was, and where are the British owned car companies? I think there's only one left and that's Morgan...Whoopee Doo! And how come France and Germany give state aid to their car industries whilst the UK wasn't allowed to help British Steel? Our industrial base is a fraction of what it was before we joined the EU and what are we left with? Service industries! So, let's hold our nerve over negotiations because we don't actually have a lot to lose anymore; the EU saw to that! BUT, we have potentially, a huge amount to gain which is why the EU are trying so hard to try to penalise us for daring to leave. Our politicians have a lot of answering to do; all they were truly interested in was boarding the gravy train so they could live the life of Riley off the backs of the rest of us. Thankfully, a few, and the public saw through the confidence trickster called the EU.
PS, Industry needs to be allowed to thrive in the UK once again. Coronavirus has shown just how dangerous it is to the economy to put all our eggs in one basket (China).

Germany has now done what it couldn't do in the last 100 Years by Tanks, Planes & Soldiers it has succeeded running Europe by economic means We must stay out of the whole European system entirely, if Remainers prefer it over their own Country go and live there

A couple of years ago , after President Trump became president and he started talking about bad trade deals ( like NAFTA) etc. I read that part of the Marshall Plan after WWII was to put tariffs on some US goods, to protect European industry and allow them to rebuild. The amazing thing is many of those tariffs still exist, to a large extent. You can guarantee those protecting German industry are high on the list of remaining tariffs.

The author appears to be forgetting that we used to be an industrial country too... Before the Thatcher years, we produced steel and coal, we made things just like the Germans still make things. What a whiny piece of writing, the work of a petulant child thats looking for excuses to justify its own inadequacies. Pathetic.

The UK made its own decision to concentrate on the service sector (especially the financial sector)
We were told in the 80s that there would be a trickle down effect on the UK economy and everyone would benefit.
We had a strong industrial base which was decimated by a Thatcher government that was hell bent on destroying unionisation.
We are reaping what was sown in the 1980s

The industrial sector had died way before Thatcher took over. She ended up doing the inevitable. More mines were closed in the previous Labour government than by her.
Some British companies like Leyland thought the single market would be their ticket to success. But it was not to be, as other non-German companies like Fiat and Peugeot are finding out now. The Euro makes German industry much more competitive and other countries less competitive.