EU asylum numbers jump by some massive percentages in 2019 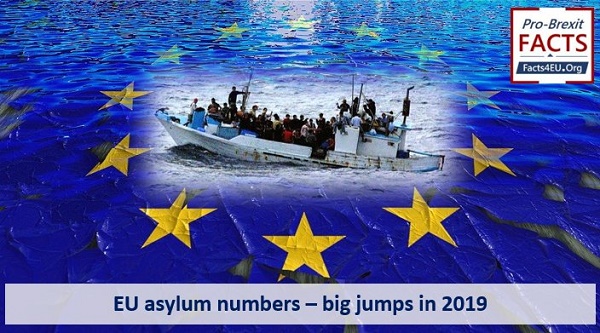 As we predicted last year, the downward trend in asylum numbers in the EU since the disastrous years of 2015 and 2016 has reversed.

A total of 721,070 people claimed asylum in the EU last year, 2019. The number of first-time asylum seekers rose by almost 12%. Some countries saw truly dramatic increases.

Asylum numbers in the EU are increasing again 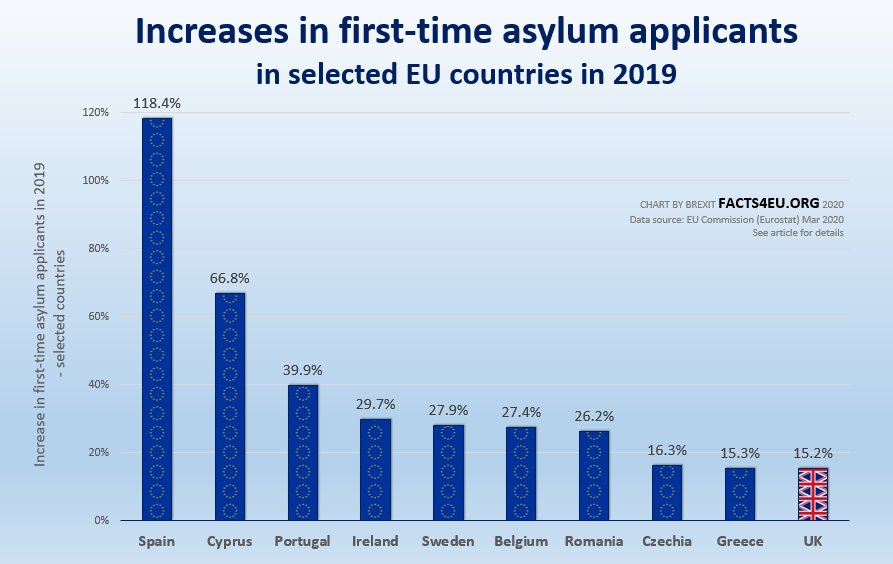 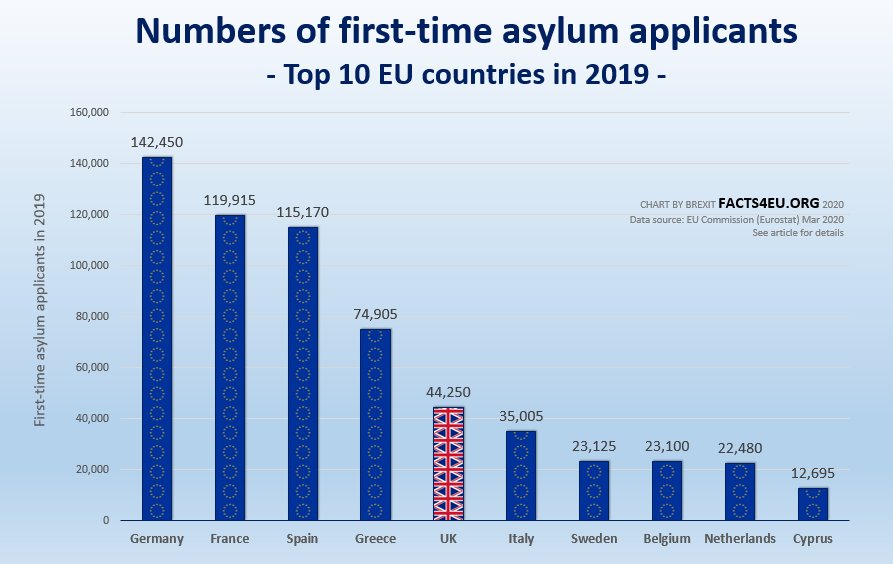 The country showing the largest increase in first-time asylum seekers last year was Spain. Below we show what has happened to their numbers over the last 10 years. 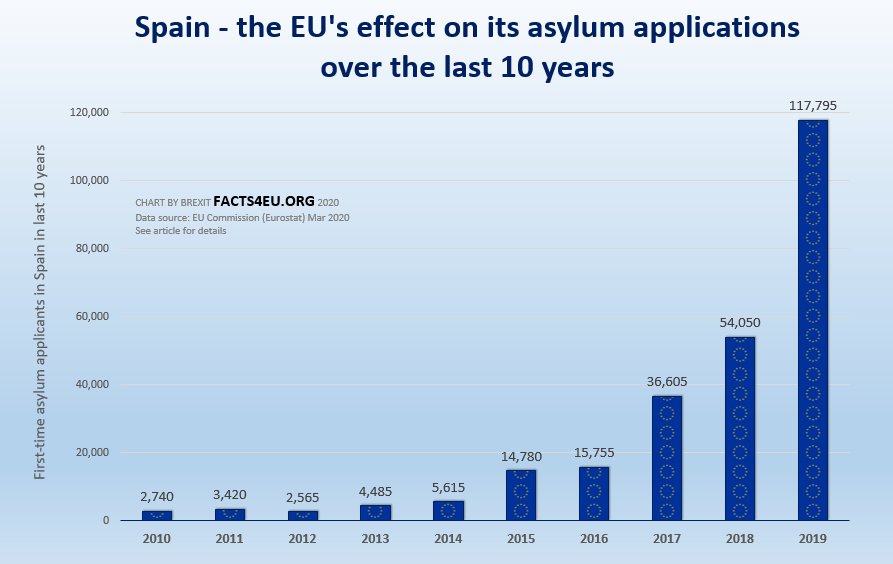 For years the EU has been unable to agree any coherent policy on migration and asylum. The fights are ongoing, albeit that almost all the fissures in the creaking EU machine are now obscured by the focus on the Coronavirus to the exclusion of almost everything else.

The problems exist at national level, EU level, and at the level of the EU’s relationships with its neighbours.

1) Nation-level example: Greece. The situation on the Greek island of Lesbos is now truly awful. Even the UN – a fellow ‘luvvie’ organisation which has much in common with the EU - is now severely criticising the lack of action.

2) EU-level example: Migrant relocation and resettlement. The EU’s policies on migrants continue to lie in tatters. Countries have been unable to agree, threats have been made by the Commission and by countries such as Germany and France, to no avail.

3) EU foreign policy example: Turkey. The EU’s hugely expensive bribe to Turkey (€6 billion) is no longer working. Turkey’s President has declared Turkey’s borders to the EU to be open. Tear gas and riot police have had to be deployed on Greece’s borders, and migrant boats are once again making it from Turkey to the Greek islands.

Do we want to return to this mess?

Many are now saying that Brexit should be put on hold. Even some Brexiteers are now calling for an extension to the Transition Period, meaning that we would not truly leave the EU at the end of this year. Some – like the LibDems – are of course calling for Brexit to be cancelled in its entirety.

We hold the line.

Will you help us to do this with a donation today? If everyone reading our research and articles gave us a little something today, we could make it through to the autumn. As it is, only a tiny percentage of our readership have ever donated.

Quick and secure donation methods are below. Confidentiality is guaranteed, and you’ll even get a personal email from a member of our team to thank you!

[ Sources: EU Commission - Eurostat ] Politicians and journalists can contact us for details, as ever.

Should be returned what's the point in us being in lockdown

No point at all if 'migrants' are still coming and allowed in! What a crazy world we now live in.

Of course they are, can't get here quick enough. Jobs waiting for them. Laughable.

Don't leave your house unless a quick food shop or exercise.
But you can still go to work.
That'll stop the virus in its tracks!

One really annoying matter is illegal migration. In their crazy wisdom, unaccountable EU masters [the commission] prefer to label illegal migrants as "irregular migrants".
Whilst I'm an ordinary compassionate old soul, I know the difference between right and wrong. I know the difference between what is legal, and what is not. The more one allows it, the more people smugglers make.
I am angered the number of times the EU [commission] claims EU member countries should live by EU rules, yet themselves flout these rules when it suits them.
I make no apologies for suggesting the ONLY way to turn the tide of illegal migration is by taking a very hard line and turning back the boats to where they came.
Let me play devils advocate for a moment. The EU have 27 member countries, though not all participate with the Schengen area - or "Schengen states" as the EU refers to them.
The UK as an Island nation has not been party to the Schengen area, and I understand Ireland has an opt-out.
For clarity, ALL EU27 countries are considered 'safe' countries, and illegal migrants should claim asylum in the first 'safe' country they land. This is not a free ticket to then roam across the continent, which as we all know has caused a great deal of friction.
UK borders should be much tougher as to whom enters our country, and their reason for doing so. The Australian model is a fine example.
Any person entering the UK illegally should mean automatic deportation, regardless? This is only my opinion.

Reading now that C Virus now present in some of our Immigration Removal Centres ( total 7 in the UK - 3 reported to have cases ) One near Gatwick in lockdown. We may soon see the High Court deciding if detainees should be 'temporarily released' during the ongoing CV crisis - how that works - no idea. Some detainees complain of the lack of soap in one IRC so unable to carry out effective hand washing. In normal circumstances most detainees are released back into the community if they are found to have a right to remain in the UK or if awaiting the outcome of their cases for example. It's also reported that lawyers told the BBC there is an inability to remove people to countries of origin due to lack of deportation flights. Change of subject but in addition the Justice Secretary is facing decisions re temporary releases of some prisoners from jails. All very worrying.