As usual, the EU seem to want to talk about everything except trade 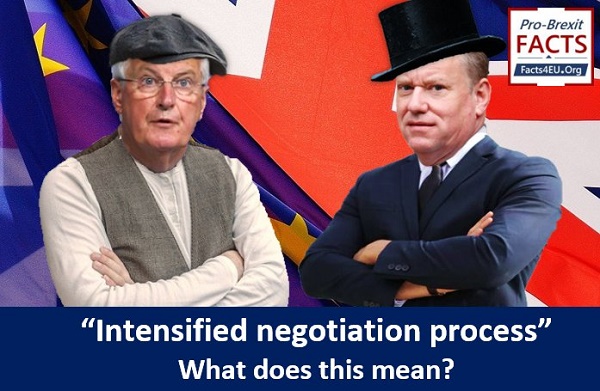 Last week there were stories in the British press and rumours thatr the Government was about to cave in to EU demands. Below we present the latest positions from each side, but first we outline some of the latest facts about the talks.

UK-EU trade negotiations resume on Monday with two hours discussing “the level playing field”, followed by two hours on “governance”. The latter relates to the EU’s insistence on having the EU’s own court, the ECJ, as sole arbiter of the trade deal - something which has never happened anywhere else in the world.

In the whole of next week, only two 2-hour sessions will take place specifically on trade issues. As negotiations resume from Monday next week there will be :-

Readers may gain a flavour of Michel Barnier’s speech on Wednesday from the following excerpts:

“We have the Brexiteers and a good part of the Tory party keeping a very hard line on full sovereignty for the UK [...] and no concessions even if it means no deal.”

“Even if you were to maintain tariffs on some goods [...]the EU will still demand strong level playing field guarantees.”

Readers wishing to watch Monsieur Barnier in full may do so below.

Who was Monsieur Barnier speaking to?

Michel Barnier was talking to an organisation which has given itself the rather grandiose title of "the European Policy Centre" (EPC). It refers to itself as a "think-tank" and it is based in Brussels. Where else?

And who is the President of the EPC? None other than Herman Van Rompuy, former President of the EU Council. This is the man whom Nigel Farage once famously referred to as having "the appearance of a damp rag and the charisma of a low-grade bank clerk". Below we show the video of the speech which Mr Farage gave to the EU Parliament at the time.

The day after Monsieur Barnier’s speech in Brussels, the UK’s Chief Negotiator David Frost gave his riposte using Twitter. We are publishing his short statement in full below because unlike Michel Barnier, Mr Frost doesn’t use 3000 words when 200 will suffice.

“The next round of talks with the EU begins on Monday 29 June. This is the start of the intensified process. We have published the agenda.

“For the first time since March we will meet face to face, in Brussels. We look forward to welcoming the EU team to London the week after.

“These meetings will be smaller and focused on seeing whether we can begin to make genuine and rapid progress towards an agreement. We will go to Brussels in good faith to engage with the EU’s concerns.

“This needs to be a real negotiation and some of the EU’s unrealistic positions will have to change if we are to move forward. We have noted carefully what the EU has said in recent days on this subject and look forward to discussing it.

“UK sovereignty, over our laws, our courts, or our fishing waters, is of course not up for discussion. Equally we do not seek anything which would undermine the integrity of the EU’s single market.

“Finally, I want to be clear that the Government will not agree to ideas like the one currently circulating giving the EU a new right to retaliate with tariffs if we chose to make laws suiting our interests. We could not leave ourselves open to such unforeseeable economic risk.”

The first thing to say is that David Frost’s statement was clear and unambiguous, yet again. “UK sovereignty, over our laws, our courts, or our fishing waters, is of course not up for discussion.” Well said, that man.

There remains, of course, a general nervousness amongst all who voted to leave the European Union that Boris Johnson is minded to compromise in some way to achieve something he can call a ‘trade deal’. We share that nervousness, based on years of seeing the UK Government betray the decision of the British people on 23 June 2016.

That said, we are encouraged by some of these very clear statements from David Frost. Can anyone imagine such words coming out of the mouth of Theresa May or her arch-Remainer side-kick Olly Robbins, before Boris Johnson took over?

What are the odds of a proper trade deal?

Brexit Facts4EU.Org stands by our assertion from our beginnings in 2015. The EU will not do a normal and reasonable trade deal with the UK because for them this is about political ideology. They desire one thing: the subsuming of all individual nations of Europe into one superstate, governed from Brussels by unaccountable people in grey suits.

Brexit was a slap in the face for these eurocrats – and it came from their second-largest member, the United Kingdom. In response, the EU apparatchiks circled the wagons and made it very clear how they were going to approach talks with the UK.

“This will not be an amicable divorce,” declared EU Commission President Jean-Claude Juncker within hours of the announcement of the result on 24 June 2016. He meant it. The EU intended to punish the people of the United Kingdom in any way they could – and they still intend to do so.

Isn’t it time to come clean?

One might have thought that if a trade deal were at all likely, the teams on each side would be talking to each other a great deal next week. Instead we get two hours on goods trade and two hours on services trade. Hardly very impressive, nor anything which could really be described as “intensified”. Perhaps David Frost approved the agenda because he knew there was little point in wasting more time on areas where the EU is clearly never going to behave normally.

If this carries on, there seems little point in pretending. The Government could simply announce to the world that there is no prospect whatsoever of the EU behaving reasonably. The EU is demanding continued jurisdiction over the UK. It demands the UK’s waters, and it demands effective control over the UK’s policies on industry, taxation, state aid, social laws, and the environment.

Boris Johnson could score major brownie points with the British public – and with large parts of the EU populace come to that - if he simply went on television at the end of next week and said:

“These unelected Eurocrats are quite extraordinary. It’s impossible to negotiate with them, as so many other nations have found. Blow this for a game of soldiers. We’re off.

“Hello World, Great Britain is Back!”

Our work makes it into the mainstream media and into Parliament. We have some influence.

If you are a relatively new reader and you haven’t yet donated in order to keep our work going, could we ask you to donate something today? No matter how small? We have no funding other than from members of the public like you. By doing so you will be striking a blow for freedom of speech, democracy, and the final achievement of a fully-free and independent United Kingdom.

You will receive a nice, friendly email from a member of the Brexit Facts4EU.Org team to thank you, and you’ll have a warm glow for the rest of the weekend, knowing you’ve done a good thing!

Just walk away then.shut our boarders, defend our fishing fleet.

Not really serious then are they.

These so called negotiations seem a waste of oxygen to me.

Most Brexiteers may have heard the EU saying they just want to 'get Brexit done'. Marvellous, and it's taken them forever to realise that's what we've been saying for years. Unfortunately, the EU walked all over Mrs May because she appeased them time after time. She showed visible weakness upon which the EU took advantage.
Fast forward to no-nonsense, tell it like it is, Prime Minister Johnson and his Chief Negotiator of the UK's 'Task Force Europe', David Frost, both defending UK interests - which I have to say is a welcome departure from past parliamentarians trying to sell-out our British freedoms.
Both will not allow unaccountable Eurocrats to push us around just because we [the UK majority] voted to leave the EU political construct.
They really need to get over this as they've known we were leaving since June 2016.
EU Negotiator, Mr Barnier (who appears to have talks with everyone under the sun), has options. He can either have a friendly or unfriendly neighbour on the EU doorstep. In my opinion, Mr Barnier should cease his demanding tone - or resign - but either way, the UK has left.
Yes we knew there would be bumps along the way to exit, and I don't find that a problem.
I agreed with Sir James Dyson when he said, "The problem is the people we are negotiating with"..."We shouldn't give them any money, we should just walk away and they'll come to us" (excellent Facts4EU article, 2017).
I sincerely hope Prime Minister Johnson kick-starts rebuilding the UK fishing industry? He MUST NOT outsource rebuilding to foreign ports.
The above statement from David Frost is a breath of fresh air, and I wholeheartedly support his stance, in UK interests.

Just wait until the End of June, they are still holding out hope that their puppets and Traitors in the HOC and Civil Service, can swing an Extension. Once the time has past, they will know, it is trade or nothing. I think they also know that if we Exit on WTO, they wont get any money, and this action could make Boris the Greatest PM since Churchill.

Spot on! Ridiculous that we can't get this information from regular news sources. Keep up the good work!

I can’t imagine the EU negotiating team bringing up fishing, state subsidy, open borders, and ECJ with the Australian or Japanese or Brazil or anyone when it comes to a trade deal.
The report in today’s Saturday Telegraph regarding the state of business in Germany is not being reported on MSN, yet for the ‘ powerhouse of the EU ‘ is pretty devastating, they are desperate to get a deal on their terms.
We have come this far, hold the line and we will achieve our goal.

So is it to be Bulldog Boris or Bedwetter Boris next week?