With Boris Johnson and the EU trading metaphors yesterday, what about real trade? 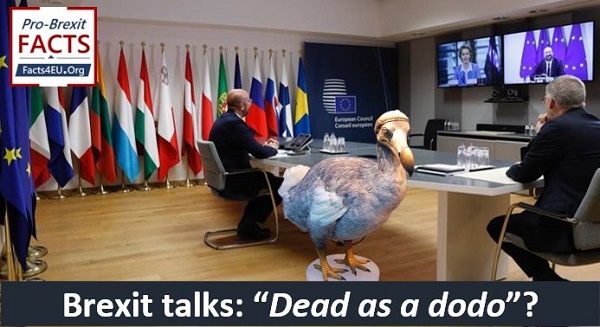 A Brexit Facts4EU.Org summary of the UK-EU trade talks

Yesterday afternoon British Prime Minister Boris Johnson sat down across an internet connection from three presidents of EU bodies. Only a very tiny number of people in the United Kingdom - and indeed in the rest of the world - would be able to name all three of these presidents from the EU.

The purpose of his meeting, Mr Johnson said later, was to inject some “oomph” into the UK-EU trade talks which have been in a stagnant and festering state for weeks. Naturally the two sides blame each other for the intransigence. Crucially, yesterday’s virtual meeting took place ahead of the June (video) Summit of the 27 leaders of EU member states which will happen on Friday.

Speaking to the BBC yesterday, the Prime Minister characterised his discussion as follows: “As I said to the three presidents, ‘put a tiger in the tank’.” For younger readers, this is a reference to a TV advertisement for a petrol company back in the seventies.

Here is what EU Council President Charles Michel said on Twitter after seeing the BBC report:

“A broad & ambitious agreement, in line with [EU Council] guidelines, is in our mutual interest. Ready to put a tiger in the tank but not to buy a pig in a poke. Level playing field is essential.”

A broad & ambitious agreement, in line with #EUCO guidelines, is in our mutual interest.

Ready to put a tiger in the tank but not to buy a pig in a poke. Level playing field is essential.https://t.co/uniMjyXvfb

So exactly where are we now?

Below is the anodyne statement jointly released by the UK and the EU yesterday. We present this with our apologies, as it must go down as one of the most boring joint statements in UK-EU history.

“The Parties welcomed the constructive discussions on the future relationship that had taken place under the leadership of Chief Negotiators David Frost and Michel Barnier, allowing both sides to clarify and further understand positions. They noted that four rounds had been completed and texts exchanged despite the challenges presented by the COVID-19 pandemic.

“The Parties agreed nevertheless that new momentum was required. They supported the plans agreed by Chief Negotiators to intensify the talks in July and to create the most conducive conditions for concluding and ratifying a deal before the end of 2020. This should include, if possible, finding an early understanding on the principles underlying any agreement.

“The Parties underlined their intention to work hard to deliver a relationship, which would work in the interests of the citizens of the Union and of the United Kingdom. They also confirmed their commitment to the full and timely implementation of the Withdrawal Agreement.”

What did the Government set out to achieve?

On 27 February this year (2020) the UK Government set out its objectives and agenda for the trade talks with the EU. It published numerous documents, including a summary entitled: “The Future Relationship with the EU - The UK’s Approach to Negotiations”. Here is a key passage.

“9. The Government will not extend the transition period provided for in the Withdrawal Agreement. This leaves a limited, but sufficient, time for the UK and the EU to reach agreement.

“The UK is committed to working in a speedy and determined fashion to do so, with an appropriate number of negotiating rounds between now and the June high-level meeting foreseen in the Political Declaration. The Government would hope that, by that point, the broad outline of an agreement would be clear and be capable of being rapidly finalised by September.

“If that does not seem to be the case at the June meeting, the Government will need to decide whether the UK’s attention should move away from negotiations and focus solely on continuing domestic preparations to exit the transition period in an orderly fashion.”

Yesterday the 'June high-level meeting foreseen in the Political Declaration' took place. There is still no 'broad outline of an agreement', or anything like it.

We suggest it must now be obvious to all readers that there is not even the broad outline of an agreement described in the Government’s negotiations strategy document from February. The EU fanatical ideologues continue to witter on about utter nonsense such as “level playing fields”, when there is a simple trade deal to be done.

Boris Johnson suggested yesterday that “What we already said today is the faster we can do this the better. We see no reason why you shouldn’t get that done in July.”

Yes, the Coronavirus has got in the way to a degree, but let’s face it: if you can’t even get some basic ‘heads of terms’ agreed in four months when this entire process has been dragging on for four years, then what hope is there in the next four to six weeks?

There is no doubt that Michel Barnier did a good job for the EU from late 2016 until the fall of the Theresa May administration in July 2019. However, let’s be honest: Monsieur Barnier was not exactly facing a towering adversary.

The May administration was riddled with Remainers, from her Cabinet (74% of whom voted Remain) to the civil servants she appointed to undermine the ministers who were supposedly in charge – the Rt Hon David Davis MP and Steve Baker MP. No-one knows what percentage of top civil servants voted to Remain, but we would put it at 95% based on our daily research over the years.

In effect, Mrs May’s was an appeasement and capitulation administration. This was a very, very low point in the international reputation of the mighty United Kingdom.

The French barnacle should now quietly slip off the rocks

Now we have Boris and David ‘British Bulldog’ Frost. It must be admitted that the PM is not yet back to his fighting weight, so to speak. His battle with illness has clearly laid him low and we suspect it might take him many more months to bounce back completely.

That said, we believe that if the EU wants to do a deal then it must act now. Barnier’s a nice chap – EU-deluded of course, but a nice chap. He did his job well in the last few years, but he should now slip quietly off the rock of EU ideology he has been clinging to, and float away.

If the 27 EU leaders decide at their meeting on Friday that they really want to preserve their £111 billion per year goods trade surplus with the United Kingdom, then they must replace Michel Barnier now. 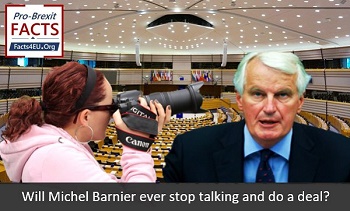 If the EU don’t replace Michel Barnier we should walk away. Instead of the relentlessly negative EU there is so much that is positive to focus on. There are so many countries around the world who are keen to trade with us. We can embrace the Commonwealth, including Australia, Canada, and New Zealand. We can do a deal with our great friends in the USA. We can explore exciting opportunities in Asia.

Above all we can re-energise this great country of ours. Throw out and shake off this lockdown. Release the built-up potential of our young entrepreneurs and ‘disruptors’ and let them loose on the world. Outside the depressing European Union there is so much to go for!

Please, please support our work with a donation if you can. Quick and secure links are below. You will receive a warm and friendly email from a member of the Brexit Facts4EU.Org team. You will also receive a warm glow from knowing that you’ve done something to support freedom of speech and the achievement of a fully-free and independent United Kingdom.

[ Sources: No.10 Downing Street | EU Council | EU Commission ] Politicians and journalists can contact us for details, as ever.

Every day it loos more lie a colluded stitch up.
Juncker said lie when needed, the Brussels mob will lie when needed.
Boris lies at will.
This will end badly.

Let's talk to the EU in a language they understand and love:
"Look EU, these negotiations are going at a snail’s pace. We should have been busy as bees months ago. Let’s not open a can of worms now. I suggest that you urgently get your ducks in a row.
To achieve any kind of agreement has turned out to be a wild goose chase. Let’s admit it, there’s an elephant in the room. British people are mad as a hornet and they are watching your every move like a hawk and they have eagle eyes.
They know that the world is their oyster."

It's taken nearly 4 years to get to a point where the EU still refuse to compromise to get a deal done. They are determined to keep a steely grip over the UK which we will not allow. It's time they realised their demands will not be met so nothing will be achieved until they put aside their bitterness and negotiate with their heads!

Eleanor B I can imagine the EU saying exactly the same thing - remember it’s us leaving and we are the guys who told our country how easy this trade deal would be, how nobody was talking about leaving the SM

Tell them time is up, not going to waste any more time until they change, and get on with USA and Japan deals which are more important long term and each one weakens their stance.

Guy Rosher the difference is the EU are trying to hang onto what is ours. They still want to fish in our waters. They still want to keep us tied to their rules like keeping a level playing field in stead of allowing us to set our own standards, conditions etc. They don't ask that of other countries who they have trade deals with so why do they expect it from us?

I knew in 2016 that we couldn't deal with the EU, so surely the government must have realised, they have just been delaying, as they want to remain.

Still the smoke & mirrors continue. This has nothing to do with trade. For the EU, this is all about the now-termed 'principles underlying any agreement', ie retained EU control which has been the focus since day 1.
The tweet from Michel & earlier recent statements from the EU 'Parliament' show that the EU's public focus will remain the EU's unique interpretation of a 'level playing field'. The question is why is the UK still playing this charade?
The talks are nowhere near the requirement for the UK's Go/No go WTO decision deadline orginally published as happening 2 weeks today (replicated in the article). What do they do? They extend it to an unspecified date, at least throughout July. It may well be that it's because, now no extension will happen that the EU will finally negotiate properly but we really need a firm Go/No go WTO date. It's almost as if certain players in the UK are continuing to collude behind our backs to keep as many EU shackles tied as possible.