Boris goes in to bat against three EU “Presidents” today

What is the EU's “Brexit Transition Period” and why should the UK leave it asap? 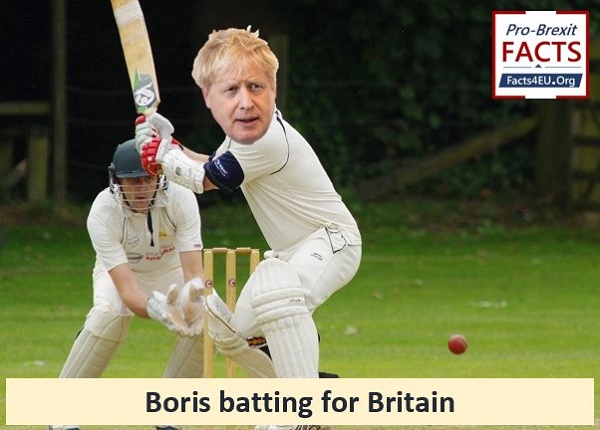 Boris, here’s a reminder of why you must stand firm against the EU ideologues

A Brexit Facts4EU.Org simple summary of what the Transition Period is and does

As Boris Johnson, Michael Gove, and David Frost go into a virtual meeting with three of the EU’s many Presidents today, Brexit Facts4EU.Org offers a reminder of what the EU has imposed on the UK already, as part of the “Withdrawal Agreement”. This was originally negotiated by Mrs May and her group of pro-Remain civil servants, led by Olly Robbins, and signed by Boris Johnson in January 2020 with the only change being to the Northern Ireland Protocol.

Today, UK Prime Minister Boris Johnson will re-confirm the message from the Chancellor of the Duchy of Lancaster, Michael Gove, to the EU on Friday: The UK will NOT extend the Transition Period.

In short, the Transition Period is an abomination and must be ended as quickly as possible

In our opinion it beggars belief that anyone in their right mind could conceivably wish to extend the current status of the United Kingdom as a colony of the European Union, with no powers, no vote, and no veto.

Our American readers will be very familiar with the expression “no taxation without representation”. Is it not extraordinary that 250 years later, the United Kingdom itself has allowed itself to be put in this position?

We are Brexit Facts4EU.Org. No surrender. No prisoners.

Please support our work today with a doination if you can. We rely 100% on ordinary voters – readers like you – to keep us in the fight. Your donation will be kept confidential unless you specifically tell us otherwise, and you will receive a friendly, personal, 'thank you' email from a member of the team. Donation links are below.

[ Sources: The Withdrawal Treaty Act | No.10 ] Politicians and journalists can contact us for details, as ever.

This exactly why I've kept asking and re-asking the question over and over again about the Withdrawal Agreement, until I thought I had misunderstood and misremembered what we were all told when it was signed, "an oven ready deal" that could be changed at a later date.

There’s been talk over the weekend of reducing or cancelling VAT a short while on some goods to get our economy going.....but we can’t unilaterally do this until we have walked away from this Transition period. We need a deal by the e d of the month or we can’t develop our own financial way out of the C19 pandemic.

Goodbye EU! We don't want to overstay our welcome!

We should be worried about a further implementation period, something that seems to have been forgotten although still likely.

Dont you give in to their treacherous demands. No EU Laws.

And another thing, the EU Commission's 'EU4Health' programme is getting underway. Not an entirely new proposal I gather but after the CV19 emergency, member states have welcomed this but from what's reported they are, understandably, rather wary of the EU Commission and the degree of control it might wish to exert. One can only imagine ! It may or may not be a good move. Basically the EU wants more power over health although members are making it clear that they want a significant role in the implementation. With a proposed budget back in 2018 of around Euros 413million going forward it appears it will be Euros 9.4bn (billion) with around 2bn already authorised by the 27 on advance purchase agreements of CV vaccines whilst being tested.
Re (1) Roz - the WA never was the 'deal', it is basically a treaty & a binding one with various horrors contained therein as identified by many in the past. The accompanying Political Declaration we were told was not legally binding & offered some flexibility in negotiation with the aim of a free trade deal. Off topic, as no outlet seems to be reporting these facts the arrivals continue into Dover. BBC website made a vague attempt to tell us about an arrival a few days ago (11/12 June ) with no detail & no update since as far as I can see but a local Dover media outlet did confirm more detail / 3 incidents & 38 on small boats. Similarly, yesterday 14/6 is reported to have seen 12 arrivals intercepted by UK BF & a 2nd boat, 5 men, intercepted yesterday afternoon. French Navy reported to have also rescued 13 & taken back to Calais (boat with failed engine) I expect the forthcoming talks will include this subject but we know EU governments basically refuse to negotiate an agreement to take back illegal entrants cross channel if the UK does not back down in the trade talks. I gather the UK has made proposals. I wish the PM & negotiating team well for today's onslaught.

I'll knock them for six