Is a trade deal with the EU worth the loss of our freedoms? 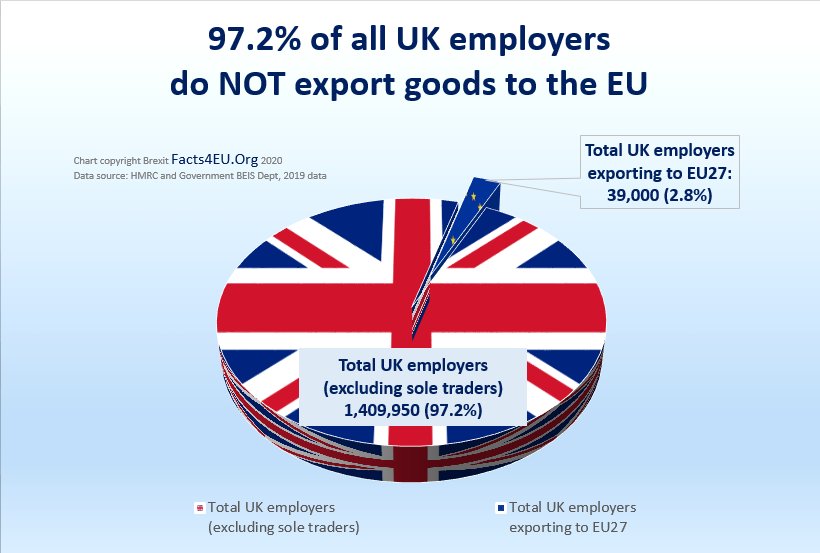 We put this ‘trade deal’ into context: only 2.8% of all UK employers export goods to the EU

Yesterday in the EU Parliament in Brussels, the EU Commission President Frau Ursula von der Leyen gave a speech to MEPs in which she talked about a UK-EU trade deal. She sounded very positive about the prospects, despite No.10 seeking to downplay the possibility of a compromise deal being in the offing in the next few days.

“I can tell you that there is a path to an agreement now. The path may be very narrow but it is there…”

“On state aid, we have made progress on… guarantees of domestic enforcement, and the possibility to autonomously remedy the situation where needed.”

“On standards, we have agreed a strong mechanism of non-regression – that is a big step forward – and this is to ensure that our common high labour, social and environmental standards will not be undercut.”

“I am also glad to report that issues linked to governance, by now, are largely being resolved.”

We comment on Frau von der Leyen’s words in our ‘Observations’ below.

Is a trade deal with the EU worth the sacrifice of British freedoms?

Over the course of the last five years the narrative from the Remainer Establishment has given the British people – and most of its MPs – entirely the wrong idea about the UK’s trade with the EU. Below we present some summary facts, all researched from official sources.

From official Government and HMRC figures for 2019

The percentage of all UK businesses exporting goods to the EU 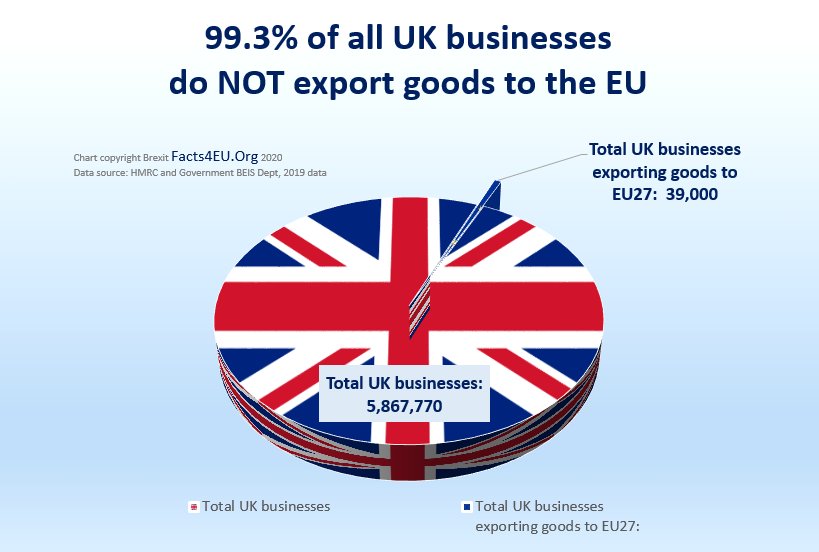 Our investigation shows that only a tiny number of the UK’s businesses (39,000 out of a total of 5.9 million) actually sell goods to the EU27. Even stripping out all sole traders from the total number of UK businesses, this still leaves 1.4 million employers. 39,000 is a very small proportion (2.8%) of these.

Yes, it’s true that the UK businesses selling goods to the EU tend to be larger, and therefore tend to employ more people per business, and to export in higher volumes. Nevertheless, they are relatively small in number and will most certainly have the resources to adapt quickly to a new trading environment. It remains the case that the vast majority of UK businesses will be unaffected by any new EU export arrangements.

The alarm bells go off

As veteran EU-watchers, alarm bells sounded across the Facts4EU office during Frau von der Leyen’s speech yesterday. Most of the topics she spoke about are arcane to most people. In our edition ahead of her speech to the EU Parliament we attempted to illuminate just one of them, with the story of an imaginary widget manufacturer in the Midlands.

The most fundamental issue is that of freedom. If there is a ‘trade deal’ – and we are now 99% sure there will be – will it compromise the freedom of the UK Parliament to legislate as it sees fit, without having to follow EU laws, directives, and regulations in any way?

The Establishment’s claims are wrong – and misleading

For years the Establishment - including the big businesses represented by the CBI and their political supporters - have sought to frame the debate about Brexit on what they claim would be the ‘cliff edge’ of an exit by the UK from the EU on ‘WTO terms’. This type of exit is what Prime Minister Boris Johnson now refers to as leaving on “Australian terms”.

The public has been given the impression that half of our business is in peril from a ‘no deal’ Brexit. This is not the case, as can be seen from the official figures we have uncovered. And the percentage of the UK’s GDP represented by exports to the EU is very small, as we shall show from official figures in our next article.

Is a trade deal with the EU worth the sacrifice of British freedoms and UK sovereignty?
We do not think so.

Brexit Facts4EU.Org continues to work behind the scenes - in addition to what you read on our website and in social media - to pressure the Government and MPs to rescind and void the Withdrawal Agreement, and to leave the EU on 31 December on WTO terms.

We badly need your help to continue this work into the final battle campaign. Readers who have not already donated to fund our work (which involves no limos, no secretaries, no long lunches – unlike the EU Commission) could do so in a two shakes of a Juncker martini. Quick, secure, and confidential donation links are below this article. We only survive on public donations – unlike some Remainer organisations no foreign billionaires have ever funded us, sadly. Come to that, no domestic billionaires have ever funded us either...

Please help us out with a donation today, so we can keep fighting for a free, independent, and sovereign United Kingdom.

[ Sources: HMRC | BEIS (UK Dept for Business, Energy and Industrial Strategy) | EU Commission ] Politicians and journalists can contact us for details, as ever.

Another mangling of statistics. You might want to quote the number of people employed in business that export to the EU. Or include business that import from the EU. Or include businesses that are involved in a supply chain that includes the EU.
For example, a small garage that fixes VWs probably gets its parts from a UK supplier so won't be an importer or exporter, but will be screwed if their supplier can't get any goods through customs.
I'm all for putting forward an argument based on statistics, but it needs to have fewer holes than a sponge.

Never! just shows how the big business tail is wagging the dog!

AJ, you might want to present your argument based on statistic for once. No? Thought so.
You're all just empty talk aren't you? How pathetic.

Soon to be German, what do you care? You're supposedly moving to Deutschland which should be booming after Brexit. Oh, wait...

We voted leave the EU and the sooner the better

13. Mary M - I'm not holding myself out to be a "prolific researcher" like this website. My argument is that the data presented here is so patchy that it doesn't actually prove anything... Surely it's the job of the researchers to research, not the readers?

AJ (16) - I have no wish to turn this into 'chat' so will not respond further.
Where valid in-depth research is carried out on a particular matter, with FACTS presented to the domestic and worldwide audience thereafter, it is in my opinion that those who disagree with these facts should present a FACTUAL alternative (the clue is in the title if this site)!
You allege the "data presented here is so patchy that it doesn't actually prove anything".
You will note Brexit Facts4EU.Org articles carry official data sources below each article [as it always has done], whereas you provide no statement of fact, and no data source.
If you were confident of your 'argument', as you state, you would provide your data source in opposition.
Facts are facts, assumptions are not!

Jon, well said, completely agree!
AJ, you just admitted that you never ever check any information you read anywhere or any facts backing your own statements.
That makes all your comments rather worthless and pointless.

Our freedom from this bunch is paramount.

No..our deal with the EU has cost us billions over 40 years.. It's never been Free and we've lost many industries and good jobs..I want out..