Trump slams Germany on defence and on trade 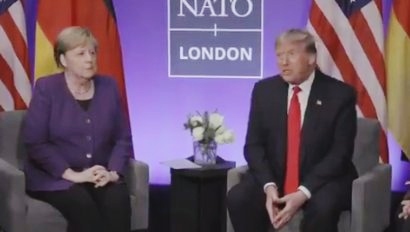 Brexit Facts4EU.Org presents the facts behind the President's words

On Wednesday morning 29 July, prior to departing on Marine One from the South Lawn of the White House, President Trump was asked by reporters about America's plans to pull one-third of its troops out of Germany.

As the US President was preparing to leave the White House at 9.15am on Wednesday morning he made some very strong statements about the EU's largest country and largest economy. Here is the exchange.

This was President Trump on Wednesday

Q Mr. President, on NATO, you just gave the order to remove U.S. troops from Germany. How does that keep Russia in check?

But Germany owes billions and billions of dollars to NATO. And why would we keep all of those troops there? And now Germany is saying it’s bad for their economy. Well, it’s good for our economy. Germany is delinquent. They’re at 1 percent. They should be at 2 percent. And actually, everybody should be at 4 percent, not 2 percent, because 2 percent is too low. But they’re at 1 percent, and they’ve take advantage of us for many years.

And you think that’s bad? They take worse advantage on trade. And I was all set to fix that, and then we got hit with the China plague. But we’ll be fixing it.

So just how many billions does Germany owe?

The US President has consistently been attacking the EU's largest economy over its lack of defence spending, and threatening punitive trade sanctions over its enormous trade surplus with the United States. Brexit Facts4EU.Org has analysed the latest figures from NATO. We only took the data from the last five years, although the lack of investment in defence by EU27 countries has been going on for decades. 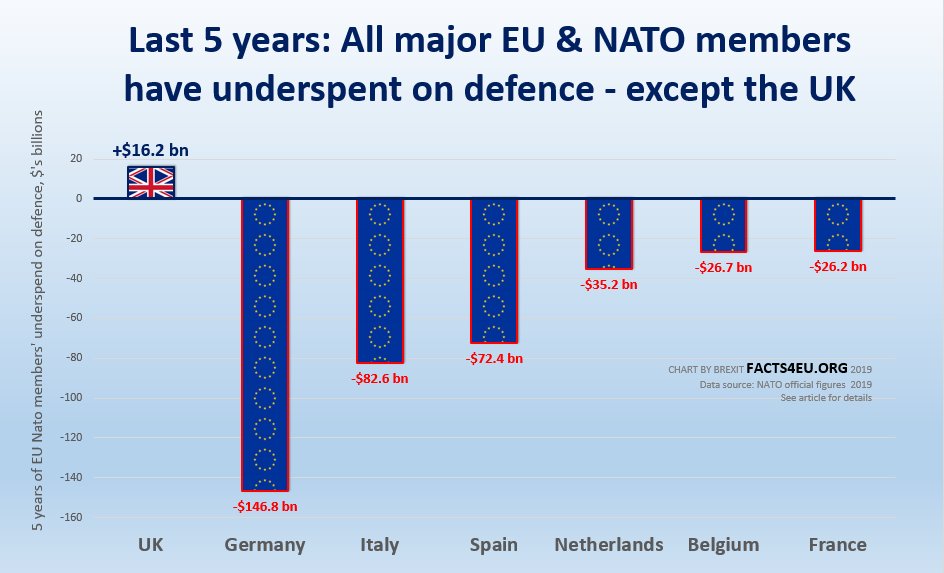 Presiding over the massive underspend on defence by Germany in those five years was Ursula von der Leyen. Frau von der Leyen is now the new EU Commission President, and her new budget which has been provisionally approved increases EU defence spending.

None of this extra EU defence spending is going to NATO - the organisation that has preserved the peace in Europe for the last 70 years.

Is Trump also right about trade?

Here is what the US State Department says about Germany.

"Germany is the world’s third-largest exporter. Every fourth job in Germany depends on exports, which accounted for 47% of Germany’s GDP in 2018 (almost four times the export share of U.S. GDP)."

Germany runs a lucrative trade surplus with the US and has done for many years. In 2018 this surplus stood at $67.4bn in goods. In the same year Germany ran a $37bn trade surplus in goods with the UK. 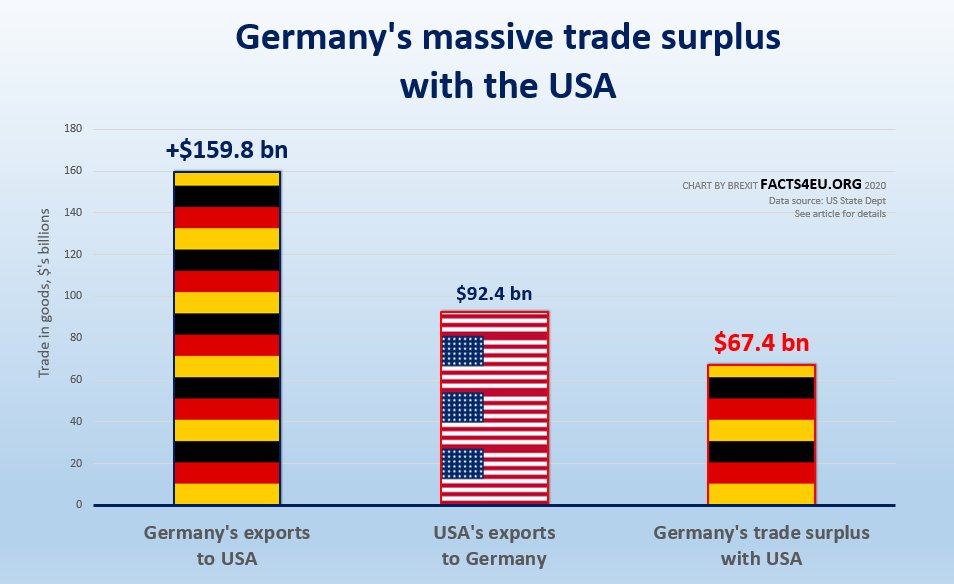 On both defence and on trade, President Trump is correct in his analysis.

President Trump uses shorthand to communicate to ordinary voters. His messages are often ridiculed by the mainstream media who prefer long and sophisticated arguments.

NATO members are supposed to spend a minimum of 2% of their GDP on defence, and 20% of their total defence spend should be on equipment.

The UK is the only country in the EU to achieve both targets. Germany has consistently missed both targets by a country mile, for decades.

When the US President takes EU countries to task – especially the EU’s largest economy Germany – he is quite right to do so. And when he claims that these countries should be held responsible for their lack of expenditure on defence for decades, we agree.

When it comes to trade, Germany does very well out of exporting to the US and the UK. It cannot afford to have both prime export markets impacted by tariffs. Should Donald Trump win a second term, which contrary to the polling we think he will, then the EU's largest economy could be in for a very bumpy ride.

FOR READERS: We really do need your help to keep going. The research for an article such as that above takes a long time. We do it – and we spend a lot of time simplifying and making it punchy – because it gets read by far more politicians as well as members of the public. If you would like us to continue, please make a donation today. We DO affect the debate. Quick and safe donation methods are below this article, thank you.

[ Sources: NATO official figures | The White House | US State Dept | UK Office for National Statistics | EU Commission ] Politicians and journalists can contact us for details, as ever.

Like him or not President Trump is right. Cuts to the chase too.

These are big numbers and no wonder Trump isn't happy. I don't suppose the New York Times or our Times will provide this information.

Finally the tables of justice are starting to turn all over the place.
We can now see and feel that some EU countries are going to get their come upance over the coming years.
The truth will always out,As long as there's good people to fight for it.

Well he's not wrong there.

It's extraordinary Germany gets off so lightly. For decades they've let others (USA, UK) pay for their defence whilst benefiting from the single market and their artifically deflated currency thanks to the Eurozone. They've sold each country far more than we sell them but haven't paid anything like their share for the defence of Europe.

President Trump is right. The Germans have outsourced the costs of their own defence to others like the USA and UK. They are rich enough to be able to pay for their own defence. They have also profitted hugely from an artificially manipulated currency which has allowed them to behave in their usual mercantilist ways. In 2021 I hope the USA and UK slap them with huge tariffs to 'level the playing field' as Barnier is always telling us we have to agree to.

Donald Trump gets ALOT of negative press from the do gooder Snowflake & PC brigades who hate everyone who doesn't conform to their way of thinking,& that includes the 17.4 million Brit's who were apparently too stupid to know what it was we were voting for & as Trump has expressed his support for Brexit in the past,when he speaks sense & truth,of which he did as regard to Germany & the rest of the EU, naturally he,like all Leave supporters, will become an apparent 'enemy of the state',not Germany racking up huge debts,not France stealing millions of hard earned British taxpayers money & fish from OUR waters,not the rest of the unelected bureaucrats ravaging the economies of all nations within,it's Donald Trump,it's the 'thick criminals' who support Leave. Sometimes,I really do wish we had people at the helm of our country & some of our businesses leaders like Trump! If we did,we wouldn't be in this mess today!

Trump for Prime Minister. I like it. Why? Because he works hard to dig out the dirt, speaks honestly and clearly, and gets things sorted. Trump is not afraid to face up to some really tough challenges. . Boris Johnson could do well to learn from him.