Fed up with Parliament? Read this upbeat Brexit article instead

How the UK keeps the EU27 trading 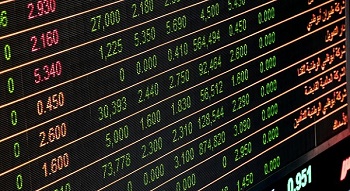 To trade internationally, countries need foreign currency. The UK has dominated the entire world in foreign currency trading, (known as Forex or more simply ‘FX’), for half a century.

The UK doesn’t just dominate FX in the the whole of the EU (including its ‘Eurozone’). The UK also dominates the world. And without foreign currency, even the mighty Germany would find its international trade would come grinding to a halt.

The UK dominates the EU27 in foreign exchange trading 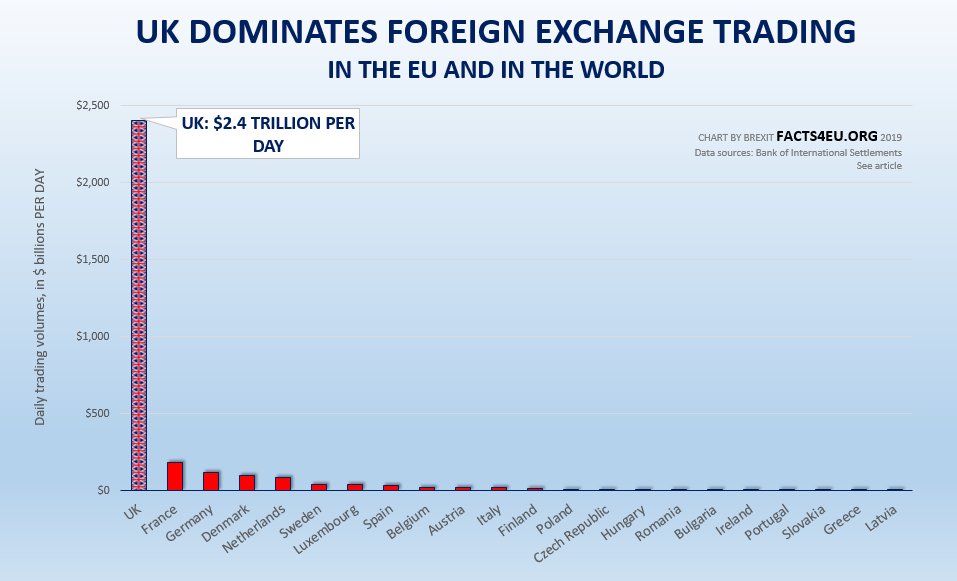 Our chart above shows clearly that it is the countries of the EU27
who are the minnows when it comes to foreign currency trading.

No other EU country even appears in the world top 5. 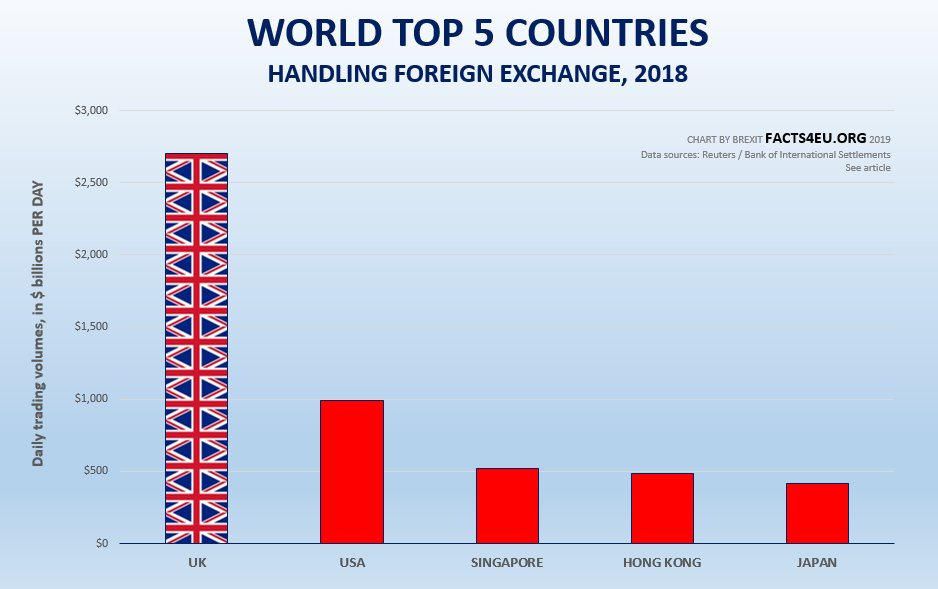 And the UK is still growing faster than all top players, ‘despite Brexit’

Below are the growth rates of the world’s top FX trading centres since the vote to leave the EU. These figures show the change between April 2016 and April 2018 – the latest figures available.

“Despite Brexit” the UK continues to grow at more than twice the rate of its nearest rival (USA).

The UK’s FX growth rate is double that of the USA and Hong Kong and is the fastest of all the major financial centres.

So what does this say about Brexit?

According to the Reuters survey and analysis, over two years after the Referendum:

“Leaving the European Union was supposed to deal a crippling blow to London’s position in global finance, prompting a mass exodus of jobs and business. But with eight months to go, London has tightened rather than weakened its grip on foreign exchange trading.”

“Foreign exchange - the largest and most interconnected of global markets, used by everyone from global airlines to money managers in transactions worth trillions of dollars a day - is the crowning jewel of London’s financial services industry.”

And according to Alexander McDonald, Chief Executive of the industry group European Venues and Intermediaries Association:

“In order for London to be replaced there needs to be an alternative venue and there isn’t one.

“The FX market is effectively an offshore dollar market and offshore dollars are always going to be looking for an international home, and that’s London.”

The Brexit voice of British business

Brexit Facts4EU.Org asked Tom Bohills, Founder of the Alliance for British Entrepreneurs, for his views. Here is what he told us early this morning.

“The positive picture for FX mirrors what ABE is seeing across the other sectors of the City. We were promised the banks would leave and the jobs would go. In fact, City firms are hiring and expanding aggressively. Over the last year alone we have seen multiple announcements of brand spanking new HQs from the very banks that said Brexit would see them move to the EU. Goldman Sachs are building a new £1 billion HQ and Citigroup have taken a £1.2 billion long term lease in Canary Wharf.

“Away from the hysteria of the media’s doom laden commentary the City has quietly adjusted and is not just completely prepared for No Deal, it is already operating on this basis.

“The people who ignorantly spread fear about our financial services sector for political gain should publicly apologise.”

Outside Westminster people are fed up with the shambles that has been going on in Parliament. This morning the media is full of the events of yesterday, when anti-democratic MPs once again refused the request of Prime Minister Johnson to let the people decide who they now wish to govern them.

The ins and outs of all of this – and the convoluted machinations and procedures being used to thwart Brexit – are of limited interest to ordinary people. They know Brexit is being thwarted by a few hundred cosseted individuals in Parliament, but they care little for the arcane details.

The power of Global Brexit Britain

Above we have once again shown the sheer power of Global Britain. No economy – not even the mighty Germany’s – can run without a functioning engine. And it’s the UK’s pre-eminent economic centre which powers this for the EU27.

We were all told that there would be a mass exodus of bankers and traders to Frankfurt and Paris. This simply hasn’t happened because, frankly, no-one wants to go there. International bankers and traders have families, and we have seen many stories of spouses visiting those cities and reviewing the lifestyle, and the education options for the children, and refusing to budge from London.

Like a great many people in the UK, we’re sick and tired of being told what our country can’t do. We prefer the reality.

As the fifth-largest economy on the planet, with a thriving cultural scene, at the centre of the world’s time zones, and being the originator of the world’s common language, the UK is very well-placed to enjoy continued growth and prosperity after Brexit.

Now there's a positive thought to brighten your day!

We hope readers liked this positive article instead of the Westminster Bubble obsessions of much of the mainstream media. If you would you like us to continue researching and publishing daily, please support us. We just can’t keep going without some more funding. Quick and secure donation methods are below, and you will get a thank you from us. Your personal information is NEVER published by us or used by others and you will not receive regular emails asking for more. We simply need your help. Thank you.

[ Sources: International Bank for Settlements | Reuters ] Politicians and journalists can contact us for details, as ever.

Fed up with Parliament?
Shameful scenes there last night! Utterly moronic opposition party singing the Red c**p and making fools of themselves as befits their stature in life let by the worst speaker ever to sit there. Added to that the latest 'honours' list from the remainer May, some attrocities in there too.
No wonder the world looks on and laughs at 'Great' Britain.
When will the dumb Conservatives realize that to win the next election they have no other choice than to deal with the Brexit Party?

The EU constantly trying to talk down the UK is one thing, they just want the most beneficial deal for themselves.
Remoaners in Parliament really are beyond belief and I wonder how they justify their motives to themselves.

The really shameful behaviour in Parliament was being displayed by the dishonest remainer MPs - who should be at least intelligent enough to realise that they are now in direct conflict with the people of Britain.
They are a morals free, dishonest lying disgrace and should hang their heads in shame instead of behaving, as they did last night, worse than school children.
It is now The People vs parliament, no other way.

What an utter DISGRACE UK parliamentarians displayed to the world yesterday. Of course, I speak only of those MPs attempting to subvert Brexit - whatever it takes.
They sit on their perch effectively saying to the majority electorate, they didn't like the outcome of the referendum because we're all thick and stupid and didn't know what we were voting for. I say to those arrogant MPs ignoring a legal democratic vote, 'you can go to hell in a handcart'. You gave us the vote, and a UK-wide majority vote was delivered - NOW DELIVER IT?
Many MPs have little idea how angry our country is right now - and it's THEIR FAULT, and theirs alone.
It appears to me that power has gone to the heads of those MPs, and I truly and sincerely wish that our Prime Minister ignores their crazy actions and takes us out on WTO terms - after all, how many times have we heard the EU say they will not negotiate?
YOU NEVER TAKE NO DEAL OFF THE TABLE IN BUSINESS.
Please check out 'Good Morning Britain'. The Rt Hon Emily Thornberry was interviewed earlier and returned the most stupid response I've heard in a long time. Piers Morgan pressured her to answer his questions (rightly in my view). I'm sorry, but she was a disgrace.
If I were 'jonny foreigner' looking at Parliament yesterday, I wouldn't do business with those MPs trying to subvert Brexit if you paid me!
We want this Parliament changed, but 'snowflake' MPs were too CHICKEN to accept a General Election when it's offered to them.
As an aside, Mr speaker wont be missed.
I challenge these rouge MPs to present the truth, in the same way pro-Brexit Facts4EU.org does?
Something to think about - 1970's politicians LIED AND DECEIVED about the EEC, and Heath covered it up (see FCO 30/1048) - the electorate finally overturned this with ONE referendum.
MPs should not forget that the 2016 referendum was effectively CONFIRMED by way of the 2017 General Election.

Last night in the HOC was a sickening display of virtue-signalling narcissism and Grieve's everso "humble" address sets a dangerous precedent for stopping freedom of speech and privacy.

Excellent comment 4, Jon, Wales I have never in my lifetime known a period when the opposition parties all of them are frit and refuse an early election!
That is undemocratic, and I believe everything they have done over the last 3.5 years is unconstitutional! Yet they have a similar speaker of the house, who is still in place until the end of October!
With such people in parliament not only is the country a laughing stock, but all advantages of Brexit, of which there would be many are being thrown away, because of these traitors.
Unbelievable madness.

I've been watching the excellent documentary series on BBC2 about 'The Rise of the Nazis', and it occurred to me just how striking the parallels are to recent events. The BBC is of course, spinning it as a warning from history on the dangers of populism, nationalism and the Far Right, but in reality it highlights the dangers of the Remainers.
What we have seen is an unelected, undemocratic rabble taking over the Government, introducing bogus laws, and then refusing to hold an election. It constitutes Fascism, pure and simple. It is the Remainers who are the new Nazis, except they are mainly from the hard left rather than the hard right. They are even riddled with anti-Semitism too.

This stagnant Parliament has to offer the people an election.
In the meantime Misuse of Article 50(3) has to be challenged in the Courts.

In all the heated furore over Parliaments antics your highlighting of London's Foreign Exchange dominance has not received the praise it deserves. Leaving without an agreement twill not diminish it.

The day of reconning is coming and they cannot hold off the election forever.Boris should do a deal with Farage as that is what all the others are doing