The EU in total : 7 Presidents and 23 Vice-Presidents 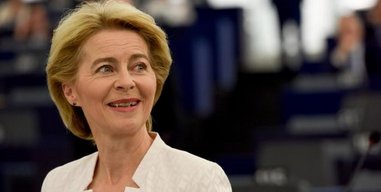 Yesterday the President-elect of the European Commission, Ursula von der Leyen from Germany, announced her list of new EU Commissioners. (The term ‘President-elect’ is of course a misnomer, as she was the only candidate put forward.) She also announced a new structure for her organisation.

The new EU Commission will have 27 members comprising :

One appointment will be of particular interest to UK ministers: that of Phil Hogan of the Republic of Ireland as EU Trade Commissioner. The anti-Brexit Mr Hogan will be responsible for negotiating a trade deal with the UK after Brexit.

It may also interest readers to learn the titles of some of the ‘Portfolios’ of the new EU Commissioners.

The above are some of the official titles of the portfolios allotted to 12 of the new Commissioners yesterday. When we have worked out what all these titles mean in the real world, we will of course bring readers this exciting news.

According to French media, Sylvie Goulard, France's candidate for the European Commission, has had to re-pay 45,000 euros to the European Parliament, in the case of alleged fictitious jobs of parliamentary assistants. This case was only closed by the EU Parliament two weeks ago.

Meanwhile, the Polish commissioner Janusz Wojciechowski is under investigation by the European anti-fraud office for “presumed irregularities” concerning the reimbursement of travel claims when he was an MEP. This must be embarrassing for someone who is a member of the European Court of Auditors which monitors and audits MEPs expenses.

Finally, a quick summary of all your EU Presidents and Vice-Presidents

The EU as a whole comprises seven institutions which are defined in the EU Treaties. Below is the list of EU Presidents and Vice-Presidents :

The EU in total : 7 Presidents and 23 Vice-Presidents

So many highly-paid Presidents, Vice-Presidents, and other bureaucrats. The only President who has a remote claim to a popular mandate is Signor Sassoli, President of the EU Parliament, but he was only elected by Italians to be an MEP.

Readers may well be in despair at the childish and frankly embarrassing behaviour of our MPs in Parliament over the past few days.

There is one difference, though. EU Commissioners are immensely powerful, are not elected, and cannot be removed by the people.

At least we can rid ourselves of our incompetent MPs at the next general election, when it finally happens.

Our readership continues to increase every week and our articles reach tens of thousands of people. Unfortunately, less than 1% make any donation to keep us going at this critical time for Brexit. Please help today by making a small donation, using one of the quick and secure methods below. We can't do this without you. Thank you.

[ Sources: EU Commission | French media ] Politicians and journalists can contact us for details, as ever.

You missed one President:
President of the European (Union) Ramalam Ramalam Ramalanga Dingdong.
A President without portfolio, who acts as special adviser to Ursula Van Der Lederhosen.

John Redwood is a must today, he points out that in passing the Act, Parliament ignored the T & C's and did not put a tick in the box. The Government will therefore be unable to make the application.

We remember the expenses scandal in the House of Commons years ago. The country and the press were furious some MPs at the time could commit such 'crimes'. Those 'crimes' pale into insignificance when looking at this vast EU rip-off?
I wonder if we'll hear hysterical MPs or the media complain about this EU waste - probably not.
They're on the gravy-train, and it's about time other EU member countries started playing hell about where their taxpayers money goes, and spent on what. They must understand they have no say over what the corrupt EU does with their money, and they can't object to laws imposed upon them by the EU, and so on.
RIP UP THIS WA (TREATY), OR OUR COUNTRY IS LOST - TIME YOUNGER GENERATIONS REALISED THIS.

Yes comment 4 Michael Wood, I concur with your equation, it has of course been under way for awhile. We have nearly lost, hanging on by the last threads, judging by the madness of Westminster the week before parliament was closed down.

Completely off topic, but well worth a read:
https://reaction.life/what-...

I turn on the news on the pro remain BBC and yet again that Scots windbag north of the border gets more air time moaning about brexit.Why does the government let her stick her nose into foreign affairs This is not in her remitt She should be summoned to downing st and told to keep her trap shut or the scotish parliament will be closed.She should be thrown out of her cushy residence .All power should be sent back to westminster

Daren, I agree that devolution should be abolished in its present form as in the Scottish example it has proven to be, “a motorway to independence with no exits” in the memorable words of former Labour MP Tam Dalyell. However, I am not sure whether Westminster can now abolish Holyrood by itself since the passing of the Scotland Act 2016 which gave further powers to the Scottish Parliament. You are right to assert that the First Minister is acting outside her remit and this is part of the problem with devolution in that people in Holyrood under the SNP don’t act within Holyrood’s powers.
I am not opposed to devolution per se but this form of it is wrong. If we are to have it it should only be done on a regional basis and for ALL parts of the United Kingdom. Undoubtedly, Labour and Tony Blair really didn’t think through all the possible consequences of what they were proposing about devolution in 1997/1998.