The UK’s democratic crisis – over 3 years in the making

We present: “My Foreign Friend’s Guide to Brexit and UK Democracy” 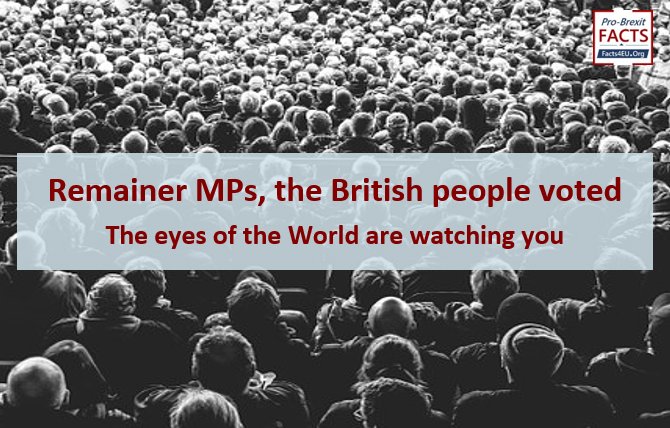 The rest of the world is looking on with astonishment and incredulity at the state of democracy in the country which is generally seen as its birthplace.

Just as with the media in the UK, significant elements of the non-EU foreign media are pro-EU - mainly because their Brussels correspondents “go native” and their newsdesks back home know little about the EU, thinking it’s a trading bloc. Those that do know something tend to be of the ‘open borders, love everyone equally’ persuasion.

Here, then is your handy Brexit Facts4EU.Org summary for your friends in other countries. Readers may also find this useful for their British Remainer friends.

“My Foreign Friend’s Guide to Brexit and UK Democracy”

Nothing happened for the next nine months

The snap General Election of June 2017

A quick note about the non-problem of Northern Ireland

The truth about these dire days for British democracy

We live in dark days, where MPs who stood on manifestos saying one thing are now doing another. If this involved only a handful, this would not be unusual.

Unfortunately the country is now facing a majority of Parliamentary MPs deliberately flaunting any semblance of democratic legitimacy. They are doing so on the biggest political issue of our age.

This issue was already decided by the British people in 2016. They may not like it, but it was the decision of the people.

For three years and three months these MPs have done everything they can to delay and block Brexit. The British people might be a patient lot, but we suspect that this patience is very rapidly running out.

We leave you, dear overseas reader, to decide whether a Government which is happy to go to the people for a renewed mandate is acting correctly, or whether to back those who would deny the people their democratic right in circumstances such as these. You may also wish to question why the majority of Parliament wants to give the decision of when and how to leave the EU to the EU itself, instead of simply implementing the decision of the British people to leave.

These are, as we wrote above, dark times. If you would like us to keep going, please donate something today. Thank you.

[ Sources: Almost four years of detailed research, contained in our daily reports ] Politicians and journalists can contact us for details, as ever.

Thank you to pro-Brexit Facts4EU.org for once again bringing these facts together. No remain-voting MP can challenge these facts, and I sincerely trust readers at home and on the continent will pass this article far and wide.
It's a big deal when we have to fight to uphold a democratic and legal referendum that Parliament itself voted by almost 6:1 to hand the electorate. Those MPs going against the final result is to go against the electorate - It is nothing less than treacherous.
Parliament voted to give the referendum, so they KNEW it would return one result or the other (akin to General elections).
We have watched in dismay as many remain-voting MPs have been trying every dirty trick in the book to stop Brexit.
I will send this superb article to my MP, whom is also a member of the HC "Committee on Exiting the European Union".
Not only are we fighting for our country, but for democracy itself.

I am betting Boris has out smarted these traitorous rabble. As I understand it, The Bill passed should have "Queens consent ". The speaker only granted "Royal Assent"
Boris will hopefully pursue this through the Courts.

We have the strange situation of the Prime Minister being threatened with dire consequences if he does not request a third extension to Article 50.
The BBC has, MPs have lined up a legal team and are willing to go to court to enforce the law to avoid no deal, if necessary.
At the same time these Parliamentarians are ignoring the conditions and instructions attached to the second extension, requested at their instigation.
The EU Council made clear the sole purpose of the extension was to grant a little extra time to ratify the Withdrawal Agreement, not to reopen it. (Read Lord Kerr's comments in the Guardian in 2016).
It is now five months since Article 50 expired and Parliament has not ratified the WA or indicated it will ever do so. No new negotiations are possible without the WA being re-opened.
Paragraph 3 of Article 50 is being miss-used, to prevent the United Kingdom leaving the EU by default (No Deal).
Stanley Brodie QC in Article 50 TEU Part I and Part II (23.5.19) saying it was unlawful and ultra vires, being out of time when requested.
Thirdly extension after extension is a fiddle to defeat the purpose of Article 50 - the means by which a Member State leaves the EU.
Lord Kerr said at the time, “We needed a time limit in order to reassure the departing state that it could really depart — it would get out, it couldn’t be enmeshed forever in endless negotiation, it could escape.”
This Bill is preventing the UK from escaping.

Sharon, good articles on this subject yesterday and today on John Redwoods Diary:
'This Bill has passed this far without a Money Resolution to approve the large extra spending entailed in delaying our exit, and without Queens Consent to Parliament taking over the power vested in government to negotiate treaties.'
On this BrexitFacts4EU site Chris posted a good link to an article on Queen's Consent which is well worth reading: I re-post the link:
https://moneymaven.io/misht...
I will send today's excellent BrexitFacts4EU article to my ex-MP, the rabid Remainer, Anne Milton in response to her explanation to of her behaviour she sent out to constituents - I doubt she will read it.

Our vainglorious media, led by the anti-BBC, where facts & impartiality no longer matter (much like the Parliamentary coup MPs) and the truth goes to die. The pictures they paint, & the narrative that they are driving, are not the real world where we live but are to frighten the people, many of whom still rely on them for 'information'. They are a disgrace.
Anyone guilty of 'wrongthink', ie leaving the EU, is 'disappeared' in that they no longer appear on our screens to entertain us. Think about it. Those that cannot be 'disappeared' have mysterious 'technical' problems with interviews, dropped lines & are never allowed to actually put their point across through interruptions whilst blatant disinformation by EU agents (that's what they are) is never challenged. 'Leave' segments are sandwiched between Pro-EU segments as people are more likely to register the beginning & the end, less so the middle. Dialing up the background sound to make the (mostly paid) pro-EU protesters sound more than they are. It is truely a media dystopia.
We are currently in an insane world where the PM is threatened with jail for insisting on leaving the EU & implementing a democratic mandate? This is the stark reality of what the EU really is about. "There can be no democratic choice against the European treaties" - JC Juncker.
To mark my imminent death as a direct result of leaving the EU, as portrayed by our media, I have added a black spot to my name. I'm not too sure whether it'll be via Super Gonorrhea, WW3, starvation, loneliness or the myriad of other 'threats' that we hear daily. Personally, I'm disappointed that we haven't reached the plague of locusts point yet.
One thing is certain, the media can never be trusted again & the anti-BBC is not fit for purpose given its current funding status.

Would love to sped this printed in totality in The Sun, Daily Mail,Express and Telegraph: front page.
Could add
Government spent £9 mill persuading people to stay: no single market, no customs union
Remainders talk about Brexit campaigns overspending and lying, no court case proven.
Remainders want a second referendum but have already said they would ignore the "wrong" result: Swindon, Blair
MPs openly supported the referendum and then left their parties and refused to stand for by-election.
Brexit Party ha the most MEP's of any party in any country in the EU despite having only been recently founded.
Could also add a section on the EU response to our leaving with some of the quotes about making the UK suffer!
Cheers

I would further point out that those very same Parliamentarians chose not to have an Agreement by voting against the WA, a situation they are now complaining so loudly about.

Brilliant summary. It's short enough to be read but has all the main points, well done. I've just sent this to some family in the USA and Australia.

@ Sharon. You misunderstand. Many of us maintain that the Bill required both a Money Resolution and Queens Consent to be debated because it would entail considerable public expenditure and it impinges on the Royal Prerogative. Bercow said otherwise, using as precedent the Cooper/Letwin Act even though the wording was different and thus had a different meaning. Royal Assent is not given by the Speaker (perish the thought) but is the final stage in the passage of any Bill. The last Sovereign to refuse Assent was Queen Anne in 1708 when she refused assent, on the advice of her ministers to the Scottish Militia Bill.