How do you go into a pre-Brexit election, unable to declare your Brexit position in full? 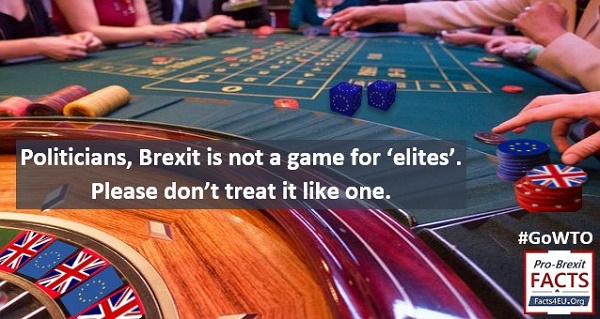 And if he doesn’t do this, the Brexit Party might destroy his electoral chances

Any half-decent negotiator will tell you that one part of any successful strategy is to pick off concessions from the other side, one-by-one. Placing your entire list of demands on the table at the start is a no-no.

Getting the other side to concede points one at a time is much easier, because each one on its own does not seem like a major concession. Taken in totality at the end, however, the other side suddenly realises the full extent of its retreat. By then, it’s too late.

How does this affect a possible General Election in October? We will explain, but firstly there’s a caveat.

The politics of calling for a General Election

It has been widely reported overnight that the Prime Minister will seek to hold a General Election on Tuesday 15 October 2019, just ahead of the EU Council Summit on Thursday and Friday of that week: 17-18 October.

As a result of David Cameron’s dysfunctional FTPA (Fixed-Term Parliaments Act 2011), insisted upon by the hapless former LibDem leader Nick Clegg, Mr Johnson will require a two-thirds majority in the Commons to be able to call an election. At the time of writing it is by no means assured that Labour will support any such motion. Certainly this seems improbable, if such a vote were held before the anti-democratic MPs have passed a Bill this evening to delay Brexit once again.

We must also remind readers that any such Bill will have to go through all stages, including the Lords, and this could take many days. Labour could easily use this as an excuse not to support a General Election vote.

That said, we will now address what will be a fundamental question for the Conservatives and therefore for voters.

What does all this mean for Boris Johnson and his General Election manifesto?

Given the duplicity of the Government in the last three-and-a-half years, many pro-Brexit voters will find vague promises hard to believe – even from an apparently pro-Brexit new Government.

1. To prevent the Brexit Party from taking large numbers of vital votes in every constituency, Mr Johnson must be specific about Brexit and what he is demanding from the EU. Large parts of the Withdrawal Agreement and Political Declaration are anti-democratic and anathema, and must be deleted. Removing the Backstop on its own is NOT enough.

2. If the PM is specific about the deal he wants from the EU, he will in effect be declaring his entire hand in one go, and the EU will instantly reject it.

And there are other key decisions to be made

Given the shenanigans in Parliament yesterday – and no doubt today – we must ask ourselves what the EU’s reaction is to all of this.

In private, EU officials are asking: what is the point of meeting Mr Johnson’s ‘EU Sherpa’ today, if they can’t even be sure that Mr Johnson’s Government will be in power on 16 October, after the presumed General Election?

This then begs the fundamental question.

How on earth can the PM go into any election talking of a ‘deal’ with the EU?

If there’s an election on 15 October, there will be two weeks to do ‘a deal’ with the EU, assuming that the PM seeks a public mandate to exit the EU on 31 October.

Even if Mr Johnson secures an absolute majority in the Commons following the election, after which he can pass an Act which negates the Bill which will no doubt be approved today to delay Brexit, there will be no time at all to do ‘a deal’ with the EU.

The best which can be expected is to use those final two weeks to persuade the EU to be sensible on a variety of matters, and at least to make one-year temporary agreements. This is something the EU has refused to do of course, but they said the same about the Withdrawal Agreement and Political Declaration.

Whilst Monsieur Barnier is sticking to his brief, leaders in EU capitals are now starting to admit that negotiation is possible. We suspect that some small element of common sense will prevail in the EU at the last minute.

Finally, what about businesses? What about people’s lives?

Some members of the Brexit Facts4EU.Org team are in business and trade globally. They have absolutely no idea what landscape confronts them in just eight weeks’ time.

Uncertainty is a feature of business. Company directors and sole traders deal with this all the time. Markets change, taxes change, the rules change, and people change. It’s a fact of life. Businessmen and women in the UK are of course highly adaptive and positive, but there are limits. These limits have been breached.

Most politicians in Westminster have no idea what it’s like to run a business, or to be an employee of a business and worry about their paycheck next month.

The anti-democratic nonsense currently going on in the Commons right now is simply shameful. Whilst these cosseted individuals talk and play political games, the vast majority of people in the country just want to get on with their lives with some small degree of certainty.

We voted to leave the EU over three years ago. It was the majority decision and the Government promised to start the process “the next day”.

If someone can deliver simplicity and certainty, they will walk any election.

If you found this article interesting, please make a donation using the quick and secure payment methods below.

[ Sources: Hansard ] Politicians and journalists can contact us for details, as ever.

Shameful is a very mild word to be used to describe the 21 MP's who voted against their own Government. However the silver lining is that today I hope those 21 are now ex-Conservatives and will never be allowed back into the party - it would appear to be the first clearing of the swamp! Many more to go, I think the Commons could shrink to 350 max same for the Lords.

Sacking of these 21 MPs is part of Johnson's dilemma.
The Torys cannot go into an election as 'the party to deliver Brexit' when it is clear that the Conservative Party is full of traitors who refuse to implement the 2016 vote of the people to leave the EU. Not only are they refusing to implement the people's decision, they are actively collaborating with the EU to damage the UK's negotiating position, and too, handing all power in that decision to the EU as to when, and thus if, we can leave the EU. [It is like being in a bad marriage and unable to leave until the abusive partner gives their permission for the other to leave, and then dictating the terms of such divorce, in this case, permanent servitude. Totally intolerable and unjust.]
Thus, he must sack them. This may lead to other Tories resigning in protest, and thus the inability to pass legislation. So, he has to go back to the people to re-elect his government, minus the traitors.
He cannot win that election without the support of the Brexit Party, and that support is conditional on having a WTO Exit.
That is Johnson's choice: to win an election on 'WTO leave' with the help of the Brexit Party; or to retain these traitorous Tory MPs and allow the whole Tory Party to sink below the waves, never to resurface, (and too, consequently, letting in a Corbyn Government ).
-
If he doesn't sack these 21 MPs - today - we know that this is the death of the Tory Party - and too, I might add, good riddance.

Comment 2, James I thoroughly agree with your analysis, it is that stark a choice, for the party, for Boris's future and of course for the country. The country being made a laughing stock around the world by the remoanians who just do not accept they lost. As Nigel Farage correctly says 'democracy needs losers consent', without that you do not have democracy and eventually no civil society and after that civil war.
The same crap is going on in the USA, the losers (democrats so-called) have never accepted that Trump won their election and are doing everything in their power to bring down the country.
The only question is who benefits the most from all this chaos, now I wish someone could answer that for everyone. Whoever it is needs neutralising.

I do not want an election but if it means getting rid of these parasites then good,, Boris will win a big majority I have voted for the Brexit Party if You vote for them then Old Commie Corbyn will win

If parliament passes the European Union (Withdrawal) (No.6) Bill a majority of 'Remainer' MP's especially the SNP will be 'cock-a-hoop'. But they are only kicking the can down the road once again. They are not achieving their desire of cancelling a 'No Deal' brexit, it remains the default. Parliament does not need a further extension whilst the current second extension remains open and useable. Parliament is holding the UK in Limbo in continuing temporary membership of the EU, without any negotiations possible.
Article 50 has expired, so legally can the EU Council impose extensions ad infinitum upon the UK, thus defeating its purpose. I will remind you of what Lord Kerr said at the time, “We needed a time limit in order to reassure the departing state that it could really depart — it would get out, it couldn’t be enmeshed forever in endless negotiation, it could escape.”
Is the EU Councils desire so strong to hold a recalcitrant State in membership, they will grant a further extension to no purpose.

The 21 Tory MPs have had the whips removed

Excellent news, Catherine, thanks. I must try harder to keep up.
Now for Johnson to win an election with the help of the Brexit Party (and a proper clean-break WTO Brexit).

I have thought for a long time that this could end in bloodshed.
It's strange that Parliament insists on its say, but that no debate was had when May signed the Global Compact on Migration without any thought of putting through
the Commons.
This migration from Africa and the rest of the World in to Europe will be fatal for the EU.

Further to Catherine's comment, it has been confirmed that Bercow will be deselected. (The Government realises that this opens up his seat to competition from candidates from other parties at the election.)
One thing Andrew Neil said recently is that if there is an election, the delay bill will have to be withdrawn because an out-going Government cannot bind its successor. If Benn and Co refuse, Boris will ask the Queen to deny Royal assent.

We now have a Government with (no) power to implement the will of the people expressed in the Referendum.
We have a Parliament in which the opposition wish to dictate to the Government that they request a further extension to Article 50. This is a legal question, so will it end up in the Courts. Gina Miller asked for and got a decision binding upon Parliament.