Who will Brexiteers vote for in six weeks’ time?

On 12 Dec, all those who want Brexit delivered will have to make a choice

© Brexit Facts4EU.Org - an example of our earlier work

Which party and/or which candidate? The vital choice for Brexit

Below we start by posing some questions for readers

Brexit Facts4EU.Org’s raison d’etre is of course the delivery of a free, independent and sovereign United Kingdom, exiting the EU as quickly as possible. Our number one priority has always been to research and publish official and incontrovertible facts about the EU and Brexit, mostly researched from the EU itself.

As a group we have always been non-partisan regarding domestic policies, even if some team members might have strong views on these. Our focus has always been on Brexit, which is why we have been unable to support the LibDems in any way. With Labour we have supported individual MPs such as Kate Hoey and Graham Stringer, and have reached out to Labour Leave on several occasions.

We have been scathing about all MPs who stood on manifestos in the 2017 election, then quite cynically tore up these pro-Brexit policies which they promised to their electorates. This applies to all MPs but very strongly to Conservative arch-Remainer MPs. As for MPs who have gone on to switch parties numerous times in the last year, without putting themselves back up for re-election, words almost fail us.

What readers can expect from us in the next six weeks

We hope to be able to continue our vital work, but what follows is predicated on receiving a higher level of donations than we currently receive. In particular we would like to ask the many thousands of readers who have never donated before, to consider doing so now. (Quick and secure methods are below this article.)

We now have a huge amount to do – here are our priorities:- 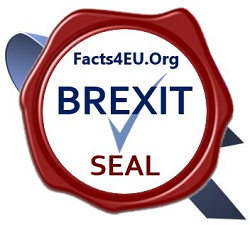 We have highly-detailed records of the way MPs voted on all the key motions in Parliament, and have ranked them along with the Leave/Remain percentages in their constituencies. Now we have to look at these again, in the light of defections to other parties, as well as removing MPs who will not contest the coming General Election.

We intend to publish this updated work when it is completed. We will decide whether to allocate our ‘Brexit Seal of Approval’ to each candidate and as ever we welcome readers’ feedback on this. We used this successfully in June, as regular readers will remember. 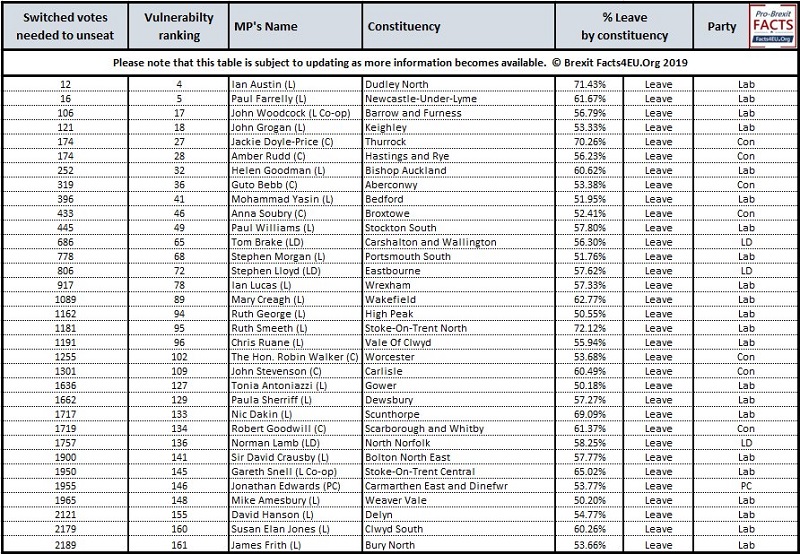 © Brexit Facts4EU.Org - example of our earlier work - click to enlarge

The alternative is to use the ‘Brexit Charge’ meter method, similar to the one we produced several months ago. In effect this is a 1-5 ranking of MPs and candidates based on how sound they are on Brexit overall, using all published information.

© Brexit Facts4EU.Org - an example of our earlier work

We have many thousands of readers, including some highly influential ones. These readers include supporters of the Conservative Party, the Brexit Party, the Labour Party, smaller parties, and those who are unaligned. We are also read in Brussels and in other countries around the world, and our social media presence reaches very large numbers.

Continuing to appeal across the board means we can never satisfy everyone, but we will do our best to be fair and inclusive.

Many of you let us know your views in private using our email form and some use our public comments systems below. We read everything.

[ Sources: House of Commons voting records | Previous Brexit Facts4EU.Org articles and artwork ] Politicians and journalists can contact us for details, as ever.

My heart says Brexit Party, my head says Conservative as I live in a Labour constituency which used to be Conservative but demographics have changed and I can't see the Brexit Party doing well.
I'll have to wait and see who is on the ballot paper, the Brexit Party might focus on northern Labour strongholds: the danger is a split Brexit vote and a co-coordinated remain vote.

The Brexit Party needs a simple 'LEAVE NOW' campaign slogan - with a clear commitment to leave the EU at the end of 2019.
This will crush Johnson's 'Get it Done' slogan showing it up for being the meaningless phrase that it is. People then will compare and contrast, with the Brexit Party slogan being far more immediate and powerful, asking of 'Get it Done' - but When? but How? and At What Cost? And why have the Tory Party not 'Got it Done' in the last 3 years - can we trust them to do it ever? Would you rather LEAVE at the end of 2019? Or in perhaps 3 years time, having surrendered God knows what to the EU?
This LEAVE NOW is what the people voted for back in 2016. It was what people expected to be done, with the UK leaving the EU within a month or two - as promised by David Cameron. 17.4 million Leave voters still wait for a political party to actually implement the result that we voted for. Its appeal is still hugely popular amongst leave voters.
As i posted yesterday:This may go some way to demonstrate the strength of our hand:
https://www.express.co.uk/n...
The Express.co.uk poll, which ran from 1.30pm until 10.30pm on Sunday October 27 and saw 16,397 votes cast, overwhelmingly shows support for a no deal departure on Thursday.
The poll asked: “Should the UK walk away on October 31 without a deal?”
A massive 93.3 percent (15,298 readers) voted in favour of doing so, as the clock ticks down to Briton’s proposed departure from the bloc.
-
So, Carol (comment 2), answering your question above - always vote Brexit Party in all circumstances. You could be very surprised just how well they do. Go for what you want, go with your heart. That is why 17.4 million people managed to defeat the Project Fear of the Remainers back in the 2016 referendum - vote for what you believe - do not vote fpr BRINO.

Comment 3, James Betram - I could not put it better myself. I don't trust the Conservatives to deliver, I do trust the Brexit party to give what the 2016 referendum vote was for leave a clean break from the madness of the EU. Any needed trade deals could then be persued I am sure the Germans and French would then have urgency on their part to make real deals on trade. As it stands currently and with both 'Withdrawal Agreements' they have no incentives to do anything except collude with the fifth columnists in the UK.

In respect to your two tier seal-personally I doubt whether most people in the United Kingdom will fully understand the Prime Ministers Withdrawal Agreement and not enough to make an obkective decision. However if the Conservative party have any tactical sense they will take advantage of their opponents weaknesses which has devolved into outright stupidity, and make sure that every voter knows certain things.
1) All the opposition parties want open borders and increased immigration.
2) They want the voting age limited to sixteen years or lower.
3) They want foreigners to vote in our elections.
4) They want Britain to have increased subservience to the EU.
It has to be told like it is and stop prancing around like a lot court jesters. The Remainer crowd have shown just how dirty they play. Exposing their ridiculous policies would be very effective. It no beholds the duty of the two pro Brexit parties to do so, because you can be damn sure that the BBC won’t be doing it.

Comment 6, tarien - I agree, on the other hand what could be clearer than Leave as on the referendum that the people voted for? What could be clearer to state that a clean break Brexit means just that we leave immediately and afterwards any needed trade deals can be made. I don't think it would take longer than a week for the Germans and French to want trade deals to sell their produce/products do you?
History will see this period, the last 3.5 years, as the most shameful in the history of our country politically.
It should be made law that whenever an MP resigns, loses the whip or is sacked an immediate by-election is called. No ifs no buts. As it stands today, several electorates are unrepresented, thanks to flip-flop MP's changing parties like others have hot dinners. They make one want to spit.

Conflict of Interest - Is it possible to produce information on payments or gifts received by MPs from the EU?

The Conservative Party has done it again - gone for the option that is best, they think, for the Party, but not for the Country.
Why do I say this? Because tomorrow, Brexit Day, Boris Johnson and Team COULD and SHOULD get us out - there are so many loopholes that would mean we are Out of the EU as of the promised date, Thursday 31st October.
Unless we are out of the EU TOMORROW, I will NOT be voting Conservative. Brexit Party will get my tick in the box, and so I suspect will many hundreds of thousands.
Tories, you had your chance. If Boris blows it, he will never be the hero figure for all posterity.

A good article from Spiked:
https://www.spiked-online.c...