What can the UK learn from Canada’s awful experience with the EU?

12 mth review: How has the much-vaunted EU-Canada trade deal worked out for Canada?

A year on, Brexit Facts4EU.Org looks at how little a 15-year EU trade negotiation has benefited a Commonwealth cousin.

On 21 September 2017, 15 years of negotiations between the EU Commission and Canada finally resulted in the provisional entry into force of CETA – the “Comprehensive Economic and Trade Agreement”.

Even after 15 years of negotiations by the EU Commission, this deal still has not been ratified by the EU’s member states. Despite this, it was ‘provisionally implemented’ a year ago, so we look at the benefits it has brought to Canada in the last 12 months.

How long did CETA take?

How has the EU’s deal worked out for Canada?

The chart below shows two things: Canada’s exports to the EU over the last 12 months, and the proportion of these which went to the UK. 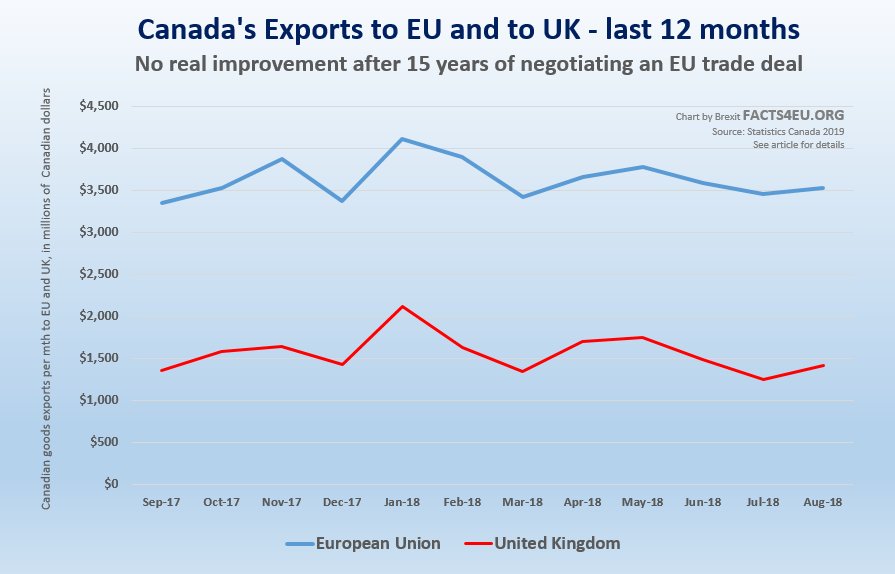 As can be seen above, Canada’s exports to the EU have barely moved in the last 12 months since the EU trade deal was provisionally implemented - to great fanfare from the EU - a year ago.

And how has the EU’s deal worked out for the UK?

Sadly, the Canadian Statistics office shows that the UK’s exports to Canada have dropped by -1.6% since the EU provisionally implemented its CETA trade deal with Canada. $8,057 million in the last 12 months, compared to $8,184 million in the 12 months before. 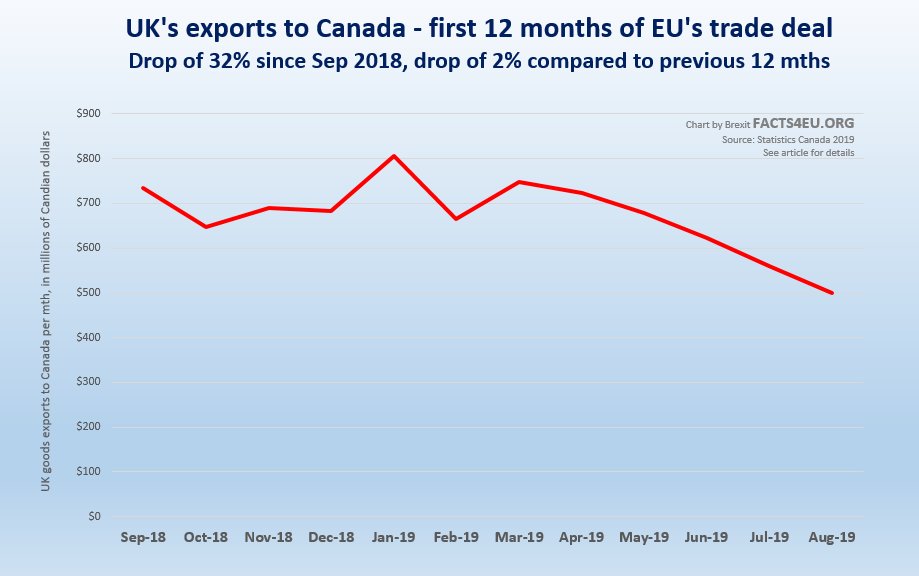 When the UK leaves the EU, CETA is worth virtually nothing to Canada

When the UK is no longer part of the EU, Canada's Free Trade Agreement with the EU will suddenly be worth a whole lot less. Currently that means just 62% of Canada’s total exports in 2018 to the EU. And Canada's exports to the EU have barely increased.

NOTE: All data comes from Statistics Canada - the Canadian government's official statistics agency.
All figures are expressed in Canadian dollars.

It gets worse for Canada

Looking at Canada’s increase in exports to the EU last year, they grew by just 2.3% - virtually static after allowing for inflation.

This trade deal, conducted by the EU Commission, has taken 15 years so far

In all conscience, can any Remainer say that this has been anything other than an unmitigated disaster? And yet the EU Commission continues to trumpet its achievement.

Commissioner for Trade Cecilia Malmström said: “The EU-Canada trade agreement has now been in action for a year and I'm pleased with the progress made so far.”

“I'm happy to say that our partnership with Canada is stronger than ever – strategically as well as economically. Together, we are standing up for an open and rules-based international trading order. CETA is a clear demonstration of that.”

The PM’s proposed new Withdrawal Agreement does not cover trade

We continue to believe that many British voters do not appreciate that the ‘deal’ with the EU, which is currently being negotiated in Brussels, is in fact another EU Treaty.

It specifically is not a trade deal. Not only that but it includes a Transition Period, during which the UK will remain in the Customs Union and Single Market for years.

Perhaps if the Canadian experience is anything to go by, we should all be happy that trade is not on the agenda.

Much better off out of this dysfunctional institution.

Highly-researched articles such as the one above take a lot of time. You don't see this important information on the BBC, nor on other sites unless we sometimes get these pieces into the mainstream press. We are still seeking donations, desperately. Please help us to keep up the pressure for Brexit. Quick and secure methods for making a donation are below. Thank you.

[ Sources: Statistics Canada (official agency of Canadian govt) | EU Commission ] Politicians and journalists can contact us for details, as ever.

Nothing ever happens quickly with the EU. Like all monstrous bureaucratic organisations it is slow and ponderous.
With its 'level playing field' mantra negotiations just drag on and on. It can never be seen to your advantage.

Speaking of things happening slowly, I would like to offer my new specialist official letter delivery service to the prime minister. My letter service is called 'GO EASTLY' all letters travel in an eastward direction around the world before delivery, so far I have secure a small child's tricycle as my chosen transport, and I estimate I can travel at approximately 1 mile per hour. crossing water and sea has not been resolved at this moment , but as I intend to deliver as quickly as possible working a vast 6 hours per day I will spend remaining time working how to get across the seas. So I hope my secure official letter delivery service can be used to deliver the delay request from the UK to the EU, remember, a well travelled letter is a wiser letter !!

We have always been the prostitute in the window for the EU, to entice people in. As with Australia & the US, huge percentages of exports are really for the UK market but claimed as an EU positive. Is it any wonder that these countries still want to 'deal' with us after we've left? That trade will continue after we've left, much on lower tariffs so the only true impact will be on the EU.
Meanwhile, in the background the EU have continued to asset strip the country & demolish anything that might allow us to compete, such as manufacturing.
Just what is happening with that supertrawler, banned from many other countries' waters, being allowed to hoover up the fish stocks off the south coast? Absolutely no action by 'our' Govt. Anyone might reach the conclusion that it is a deliberate attempt to destroy our fish stocks before we regain them in a fit of pique. Though unconfirmed, the trawler apparently later went just outside the 12 mile limit to dump the bodies of dolphins caught up in its nets & of course, process offshore without any checks. It makes you wonder just how interested our Govt really is in defending our country & independence.

Comment 3 Not4EU, yes I am disgusted by our government's laziness in defending our country and independence. 46 years years of decline thanks to the EU, which I believe was the plan all along. Weakened UK taken over by the EU, run by the French and Germans for their benefit. Once the UK is done, Europe is theirs.
We are in a very black period. No wonder none of them want an GE election.