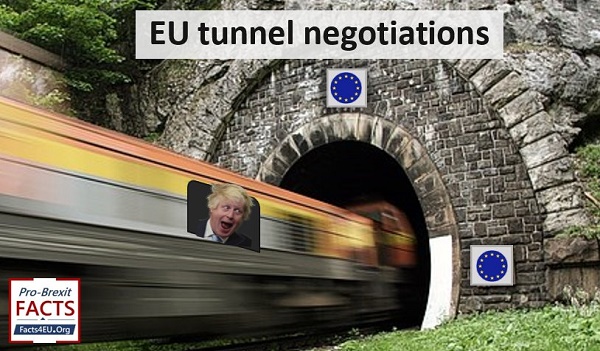 Brexit Facts4EU.Org holds the Prime Minister to account, ahead of any possible further surrenders

On Thursday 10 October 2019, the Prime Minister met the Irish Taoiseach at a wedding venue in the North-West of England. No-one knows what happened, but it has resulted in what is referred to go as “going into the tunnel”.

This means that serious and detailed negotiations have started again with the EU, supposedly under a news blackout. These talks are expected to last for several days.

So what DO we know?

Readers will have read all kinds of speculation in the mainstream media over the past 48 hours, but the truth is that no-one knows what caused the Irish Taoiseach suddenly to tell the EU that there might be the basis for a negotiated departure for the UK from the EU, on EU terms. There are rumours, but that’s all they are.

The only reasonable inference that can be drawn from this is that the PM has moved his position since making his offer to the EU on 02 October 2019.

The other inference is that the leader of the EU’s 20th smallest nation (the Republic of Ireland) seems to have an effective veto over whether the EU will allow the UK to leave the EU on a sensible basis.

What the Prime Minister promised just three months ago

Here is what we reported in early July. These are Boris Johnson’s words to a Conservative Party meeting at the five-star Culloden Hotel in County Down, Northern Ireland. He was making an election pitch to become leader of the Conservative Party and thereby Prime Minister of the United Kingdom.

Already the Prime Minister has reneged on his promises three months ago.

His offer to the EU 10 days ago most definitely did offer a “division down the Irish Sea” and equally definitely did “attenuate our Union”. On top of this, from the EU’s outright hostility earlier in the week to the start of ‘tunnel negotiations’ yesterday, something has changed in the PM’s offer. What it is, no-on can yet be sure.

Given that the PM’s proposals already broke his promises only three months ago, we fear the worst.

Worst of all, of course, is that the PM has said virtually nothing about all the other disastrous aspects of Mrs May’s surrender treaty, known as “the Withdrawal and Agreement and Political Declaration”. The border question is only one small (but important) part of the whole.

We are told by ERG MPs not to criticise or be pessimistic, but this is about Brexit, pure and simple. We maintain our stance that the only way the United Kingdom can exit the EU properly after 11pm on 31 October is without an agreed ‘deal’ with the EU.

Anything else will be a fudge of epic proportions.

We are inviting readers to help by becoming a Sponsor (£10 donation), a Gold Sponsor (£50 donation), or a VIP Sponsor (£100 and above). We will not publish your name unless you give express permission, naturally, and your contact details are never used. To become a Sponsor, please just use the quick and secure donation methods below this article. Thank you.

[ Sources: Irish Times | Belfast Telegraph | Eurostat official EU population statistics ] Politicians and journalists can contact us for details, as ever.

Enough of the bloody bus!
The sentence "Let's fund the NHS instead" is not a promise, not a pledge, not a binding commitment. What it is is a SUGGESTION that includes the speaker.
Two examples:
"Each year we go to Italy for a holiday. Let's go to Spain instead."
"We could have a second referendum. Let's have a general election instead."

"We are told by ERG MPs not to criticise or be pessimistic"
Sadly it has become clear that the snivelling ERG will sell out the country in order to keep their precious Tory party united - to keep their jobs.
They have lost ALL dignity and respect.
It could only be regained by their voting against all versions of the May-Johnson Surrender Treaty, those that give away N.I., our Union, our Army, our Money, our Sovereignty, and Laws.
I hold out little hope that they will put country before party.
Never trust a Tory.

Comment 12, James Bertram, by God I hope you are wrong but I also am getting to the stage when I will never trust a Tory ever again. There are wonderful exceptions of course like John Redwood.
I still have some optimism that Boris is not an illusion and that he will leave with no deal. Any other leave so far talked of in public is not leave but surrender.
It is sad to see what western politicians of the democratic/liberal/socialist have done in Europe and the USA. I hope that they never get to finish their demolition of civil society from outside a jail.

In an article in the Telegraph today, Jacob Rees-Mogg says 'compromise will inevitably be needed' - that compromise is by the UK. JRM on BJ: "If he thinks the ship of state is worth an extra ha’porth of tar he deserves support."
He will only get my support if most of the withdrawal agreement disappears, totally.
HOwever, what I keep on hearing is that, because of pressure of time, the negotiators are using an 'off-the'shelf' agreement. We know what that is. It is total concession to the EU.
So for JRM to say, compromise will be needed - what more can we give???