The truth about the EU’s Customs Union 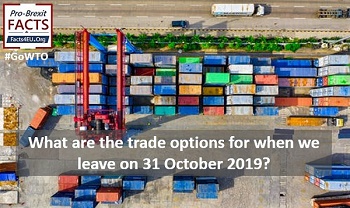 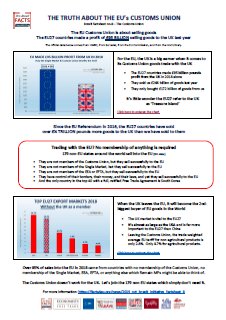 Remain MPs talk a lot about the EU's Customs Union. Few know much about it. Below we present some real facts, researched from HMRC, the EU's official statistics agency Eurostat, the EU Commission, and the House of Commons Library.

This one-pager shows how the EU27 countries profit massively by selling goods to the UK.
You can now download this information as a simple, one-page PDF leaflet

Or you can read it below. We hope you find it useful.

This is factsheet no.8 in our Brexit Fightback Initiative.

Brexit Facts4EU.Org is pleased to announce that once again some great Brexit organisations have come together, to endorse the eighth factsheet in the series.

The official data below comes from HMRC, from Eurostat, from the EU Commission, and from the HoC Library.

For the EU, the UK is a big earner when it comes to its Customs Union goods trade with the UK 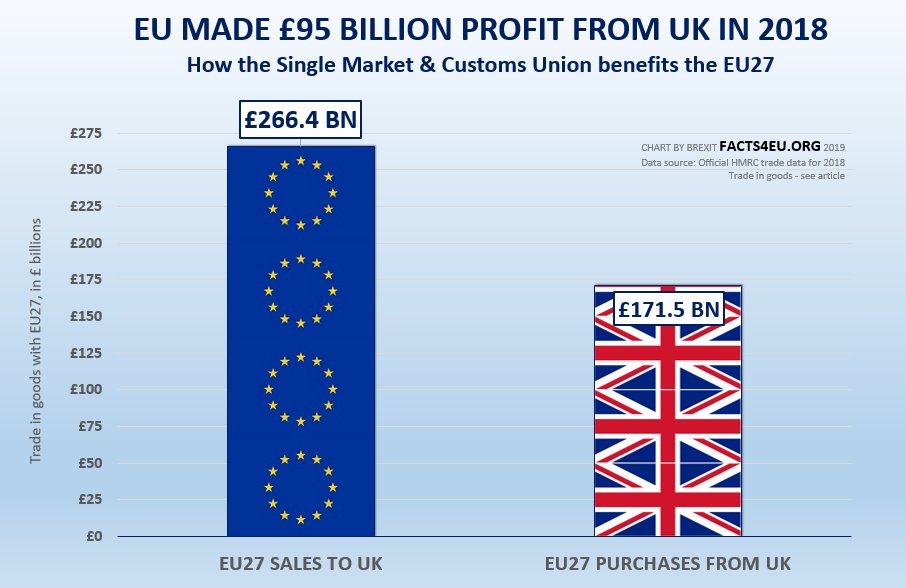 Since the EU Referendum in 2016, the EU27 countries have sold
over £¼ TRILLION pounds more goods to the UK than we have sold to them

Trading with the EU? No membership of anything is required
179 non-EU states around the world sell into the EU [EU data] 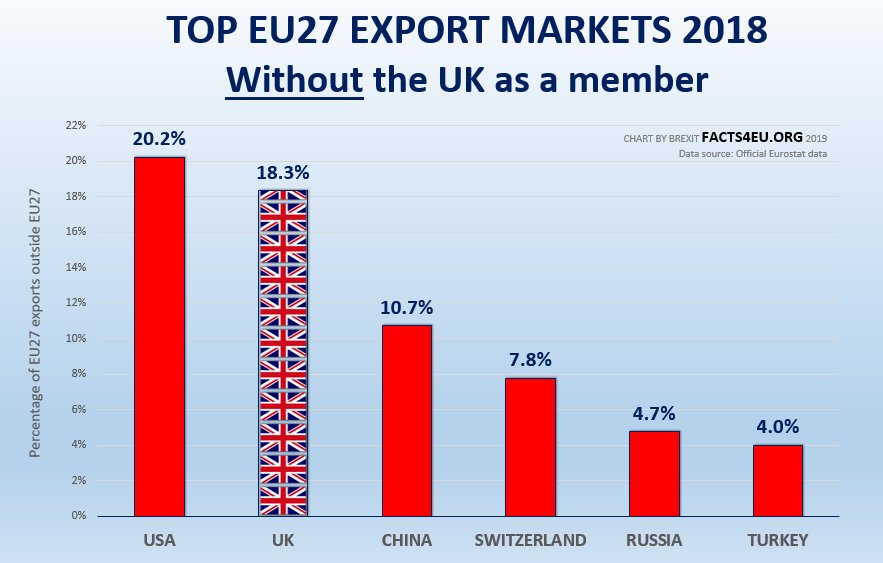 When the UK leaves the EU, it will become the 2nd-biggest buyer of EU goods in the World

The EU Customs Union doesn’t work for the UK.
Let’s join the 179 non-EU states which simply don’t need it.

Further action: This factsheet follows on from the first seven factsheets in the ‘Brexit Fightback Initiative’. More factsheets are coming, as soon as we get enough donations to continue. In the meantime we hope that readers will do everything they can to promote them.

Once again Brexit Facts4EU.Org has summarised the results of our years of research and articles into a simple one-pager for the public and for MPs. And once again this factsheet has been endorsed by nine major Brexit organisations, including us.

This is the eighth in the Brexit Fightback Initiative series and we desperately need to get the rest completed and endorsed. Other subjects will include Defence, Fishing, and several more fundamental areas where we have powerful arguments to make. They will contain official facts and figures, and simple charts, to illustrate the points at a glance.

Off-topic, but looking at the Benn Act again, section 3(4) caught my eye in particular:
[quote]”Nothing in this section shall prevent the Prime Minister from agreeing to an extension of the period specified in Article 50(3) of the Treaty on European Union otherwise than in accordance with this section.”[unquote]
Doesn't that render the rest of section 3 at the least ambiguous?

I note the US is the largest trading partner with the EU.
As I understand matters , it is only able to trade with the EU because it has a bilateral agreement with the EU set up under the auspices of: https://ec.europa.eu/trade/...
Essentially, this is an agreement ( not a Free Trade Agreement) that allows trading to minimise the impact of non tariff barriers - will the UK ( after Brexit) need to negotiate a bilateral agreement with the EU to mitigate the non tariff barriers on standards and regulatory alignment? Thank you .

Tom Rogers, the ambiguity is in the interpretation of 50(3) wording, it has never been legally challenged.
It does not say you can have more than one extension, nor its purpose or duration.
It simply says 'decides to extend this period', which ended on 29th March. The first extension ended on 12th April. The Cooper-Letwin Act sought an extension to an extension and this was granted on 10th April, expiring at the end of this month.
This was all explained in Article 50 TEU Part I and Part II (23.5.19) by Stanley Brodie QC of Lawyers for Britain.
The Benn Act seeks a further extension to an extension to an extension.
Lord Kerr responsible for Article 50 had this to say about the time period: “We needed a time limit in order to reassure the departing state that it could really depart — it would get out, it couldn’t be enmeshed forever in endless negotiation, it could escape.”
Extension after extension is defeating the time limit and preventing the UK from escaping.

Dear Boris & all other MPs elected on a manifesto to implement the referendum result to leave the EU,
I will make this as simple as possible, as it has become blatantly obvious that (and that does include quite a few dumb puppets operating on behalf of a foreign power) the level of intelligence & critical thinking on display renders you all unfit for public office. We are aware that you are effecting a coup on behalf of the EU, just as they've done in other countries.
On 23rd June 2016, the referendum result was to leave the EU. This was to return autonomous control to an independent & sovereign country. This automatically happens on the expiry of the A50 'notice' & 'transition' period, & the repeal of the 1972 ECA. This should have belatedly occured on 29th March (9 months late) this year but has been unlawfully extended twice.
What you are now proposing, disingenuously called a 'deal', is a new Treaty which cedes control to the EU before we leave. THIS IS NOT LEAVING the EU.
This demonstrates two things.
One, it is not, nor ever has been, the intention of the Govt to actually leave their paymasters, the EU. Why else would they want to give away control the very moment that control is returned? Why leave 're-entry' hooks throughout the 'Treaty'?
Two, It has become obvious that our potemkin Parliament has ceded so much control, under the radar & away from the electorate's scrutiny, that they are afraid that the 'electorate' might discover the depths of deceit & need 'cover' for their treason. Surprise! A growing number of people are much more aware of what's happened.
Many are rightly fed up with the refusal of many people to accept the democratic result but it is a BIG mistake to think that 'Get Brexit Done' means that we will accept being sold down the river on what was voted for & accept subservience to the EU. It just shows you all as disingenuous as the anti-democratic EUphiles.
You vote through the EU's plan at your peril.
Yours
17.4m+ people

Brexit related.
The peoples vote campaign ( yesterdays marchers) is supported by Open Britain/Best for Britain which in turn is funded by the George Soros Open Society Foundation (OSF)

@ no. 4, Sydney. I think the article you referred to mentioned that Article 50 say 'THIS period' and that in Law can only mean the original 2 years. The period has now had two extensions and it was noticeable that the Governments own Lawyers, the second time around, didn't quote Article 50 correctly. The obvious reason for that was that the second extension was illegal because it was not an extension of 'this period' but of the extension to this period !

At 4, and 7,
The problem is that a few lone voices have pointed out that the UK Parliament and EU have acted in very bad Faith against Article 50 if they have not actually broken it BUT no-one with any power or influence, including Johnson, has done anything about it!
What about the Brexit Party and it's MEL's: they should be shouting it in the European Parliament.
Poor Robin Tilbrook did his best.
Now watch as Remain tries to take Johnson to court for "breaking the spirit" of the Benn Act and to be honest, with no sympathy from me, as he gave away every proper opportunity to fight it.

Not4EU●, London (5). I align myself with your comment in its entirety.
It's about time MPs realised the majority electorate have spoken just as they asked us to do in 2016 - backed up by the 2017 General Election.
Opposition MPs are now so fearful of a General Election as they know many of them will be kicked out of office - at least many MPs have shown their true deceitful colours?
They have the nerve to come knocking on our doors to seek our votes, yet ignore the outcome when they don't like it.
This entire situation stinks of EU corruption where they force other countries into holding a second referendum. I think very dark forces are at work just now.
The EU just sit back and watch a country tear itself to bits and use ongoing events to suit there own narrative. NEVER trust a UK Westminster politician to make deals.
They may try to fool us once so we don't notice, but try to fool us twice and they will suffer a massive backlash because we're not as stupid as they think we are.

Comment 5, Notforeu - Well said, it is my understanding 'Hero of Brexit' Lord James of Blackheath Threatened over EU Defence Union that by 1st November we hand over control of our entire defense to the EU inclusive of nuclear deterrant.
I hope these reports are wrong, but somehow nothing in the westminster swamp surprises me anymore.