Boris, 11 months for a free trade deal with the EU? ‘Non, pas possible’

We look at the EU’s latest trade deal, signed last week after 12 years, not to be ratified until 2021

In our article yesterday we summarised the Brexit promises made in the Conservative manifesto for the general election on 12 December. In particular we focused on the following pledge :-

“We will negotiate a trade agreement next year – one that will strengthen our Union
– and we will not extend the implementation period beyond December 2020.”

As we pointed out yesterday, if the ‘implementation’ (Transition) period will not be extended beyond the end of next year, this means that either a free trade agreement needs to be in place by then, or Mr Johnson hopes to get the EU to agree to a maintenance of the status quo under GATT XXIV, or the UK exits on WTO terms.

So how have recent EU trade negotiations gone for other countries? 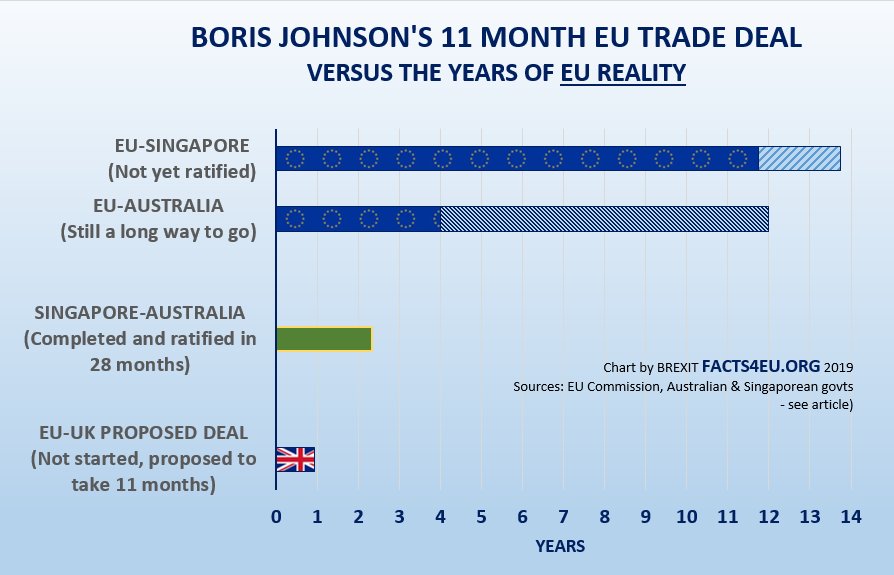 The EU’s latest example of a trade deal, with Singapore, took 12 years and won't be ratified for at least two more years

Contrast this with the trade deal between Singapore and Australia, agreed and ratified in just over two years

So, it took Singapore a total of just over two years to have a fully-ratified trade deal with Australia.

So far it has taken Singapore a total of 12 years to have a trade agreement with the EU, and this still needs to be ratified by the parliaments of all 28 EU countries – a process which normally takes years.

And what about Australia’s attempts to get a trade deal with the EU?

The EU did not even start to get serious about a trade deal with Australia until just before the EU’s Referendum in the UK. (See ‘Observations’ below for more on the EU’s sudden interest in trade deals.)

The UK’s EU Referendum rattled the EU at every level. One of the spin-off consequences was a sudden and mad scramble to get some trade deals done.

During the EU Referendum campaign we highlighted the EU’s abject failure to perform in the area of one of its “exclusive competences” – that of international trade. We published many examples, and the arguments were taken up by many of the various Leave organisations.

Nevertheless there was finally some action, even if it was too little and too late. Just prior to the Referendum the EU was desperate to agree its trade deal with the USA. It failed. And that was when the Europhile US President Barack Obama was in office.

Then the EU started negotiating with the UK's close Commonwealth partner, Australia 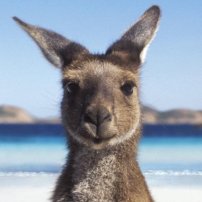 "What's that Skippy? The EU says it will take years before we get a trade deal? Aw, Skip, I'll be all grown up by then."

So what is Boris Johnson saying?

We applaud ambition and a dynamic and positive approach. This was sadly lacking under Theresa May’s premiership.

That said, there are interesting questions which are thrown up by the promises in the Conservative manifesto. At present these are not being addressed by the mainstream media.

If we assume – based on all the experience of the EU tackling trade negotiations over many years rather than many months – that a free trade agreement between the UK and the EU will be simply impossible in 11 months, what happens then?

[ Sources: Conservative Party manifesto | EU Commission | Australian Government Dept of Foreign Affairs and Trade | Ministry of Trade and Industry Singapore ] Politicians and journalists can contact us for details, as ever.

The media are quoting all the many think tanks that exist which say ‘Non, pas possible’
Why we rely on the opinion of NGO's I have no idea. They are after all a group of academics or others that have banded together to express their opinions in order to make a living. Peter Foster, Europe Editor at the D.T. quotes various people including Sam Lowe at the Centre for European Reform, a very pro-EU group.
The most relevant comment - Some EU officials agree with this (it will just be a very basic deal) – as Phil Hogan the incoming EU trade commissioner recently intimated – arguing that Brussels must face up to the reality that it may be the only choice available.
The final comment - a 'no deal' on WTO terms may look more palatable? With a majority he (Johnson) can walk away.
When it all falls apart we can revert to Trade Deals with our staunch friends, our Commonwealth Partners who aided us in bringing freedom to Europe.

In my world all quangos and NGO's would be banned overnight. The same with Foreign aid.
"When it all falls apart we can revert to Trade Deals with our staunch friends, our Commonwealth Partners who aided us in bringing freedom to Europe." - great comment 1. Sydney Ashurst.

My prediction is that towards the end of the transition period we will have come full circle. Johnson will have made big concessions to the EU like agreeing full access to our fishing grounds for little in return. The no 'No Deal' hysteria will have ramped up again and a significant number of Tory MP's will be rebelling to ensure an extension of the so called Transition Period. Meanwhile the EU will be forcing all sorts of laws, rules and regulations on us, as stupidly we will have no-one in Brussels looking after the UK's national interest, and our europhile civil servants won't even bother opening negotiations with countries like Australia or Singapore, because we cannot ratify or bring into force any trade agreements until the interminable transition period has ended. Despite the USA publishing it's negotiating objective for a UK-USA FTA, the UK pathetically haven't bothered doing the same! Why? Because we probably will never have the freedom to organise any sort of FTA worth having with the USA or any other country outside of the EU for that matter!

I mentioned this little-known polling organisation on this site the other day. It seems to have upset the mainstream parties and their mainstream media friends - which might imply that the media are very happy with the 'establishment' polling organisations pumping out results (propaganda) that favours their political bias. (Yet, this media fail to mention that this polling organisation stated- and presumably there is evidence for this - that it correctly predicted both the 2016 EU Referendum and the Donald Trump election, whereas the establishment pollsters were wildly out on both). This polling website has now put up more information on their 'About Us' section. https://www.polls.uk/about-us

Comment 4, James Bertram -I did this 8 months or more before the events: "correctly predicted both the 2016 EU Referendum and the Donald Trump election" - I should have put money on both.
Thank you for the link, I can hardly believe it, a polling website that is not totally compromised! Must be a first in modern Britain.

Thanks, Concerned. Me too, and that Corbyn (an outsider at the time) would be elected leader.
I think us committed Leavers have been seeing which way the wind has been blowing (against lazy 'establishment/status quo' thinking) for some time, more so than many a politician or pollster - and long may this new radicalism continue.