Could ¾ million LibDem voters be available to the Brexit Party and the Conservatives? 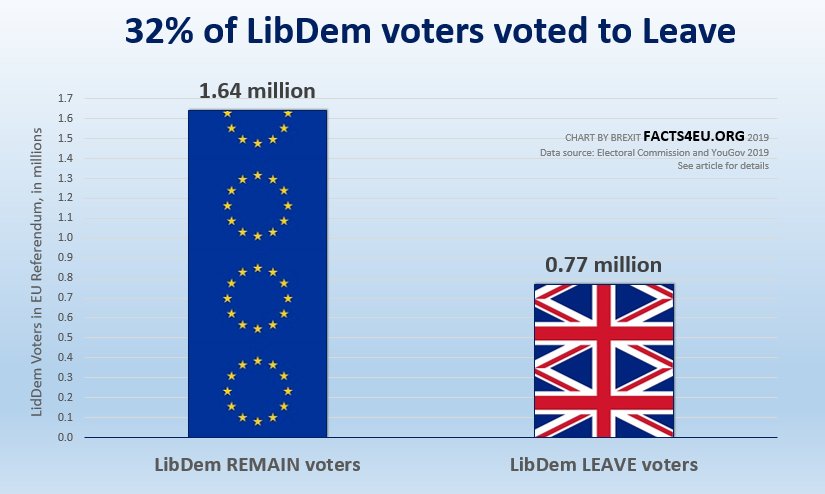 A Brexit Facts4EU.Org analysis of opportunities for pro-Leave parties in the election

We do not generally spend much time on the LibDems, as they have been consistently anti-Brexit as a party. Sometimes, though, it’s worth taking a look at them – and particularly their voters.

In this article we look at the potential opportunity to benefit from all the LibDem voters who – perhaps surprisingly - back Brexit.

Are there large numbers of LibDem voters
who will not vote for the new LibDem “Reverse Brexit” stance?

The LibDem party’s Brexit policies have hardened dramatically since 2015

The LibDems secured 2,415,916 votes in the 2015 general election under the leadership of Nick Clegg. According to a nationwide survey by YouGov published on 27 June 2016, 32% of these LibDem voters went on to vote for Leave in the EU Referendum, just one year later.

Taking the LibDem vote at the 2015 general election, and applying YouGov’s 32%, this results in the conclusion that 773,000 LibDem voters went on to vote Leave a year later, in the largest democratic mandate achieved for anything in the history of the United Kingdom.

What has happened to the LibDems Brexit policy since 2016?

In the 2017 LibDem manifesto, the party campaigned on the basis of a second referendum, not a revocation of Article 50.

“Every vote for the Liberal Democrats in this election is a vote to give the final say to the British people.”

LibDem voters who believed in Brexit could still vote for the party on the basis that Remain was not inevitable. The party’s policy was for another referendum. It can be assumed that they voted LibDem for many other reasons, other than Brexit.

All this has now changed. Faced with an absolute commitment by the party to revoke Article 50 and remain in the EU come what may, how will Leave-supporting LibDem voters react in the coming election?

There is a great deal of speculation in the media about the discussions taking place between the LibDems, the Greens, Plaid Cymru, even whatever Anna Soubry’s group calls itself these days. They are discussing the possibility of other Remain parties standing back in favour of just one Remain party in some constituencies.

We suspect the ‘Remain Alliance’ will affect far fewer seats than have been talked about, but nevertheless these talks could be significant in the event of a close vote.

What doesn’t seem to have been talked about at all in the media is the effect on Leave-supporting LibDem voters who are for the first time confronted by their party taking an uncompromising “revoke Brexit” line.

It is possible that hundreds of thousands of pro-Leave LibDem votes might now be up for grabs. It will be interesting to see if the two main parties recognise this.

We hope readers found this article – and the questions it poses to the Conservatives and the Brexit Party – to be interesting. If so, please consider donating today. We have so much to do and yet so few financial resources with which to accomplish everything. We really can make a difference, with your help. Quick and secure donation methods are below.

You make some very valid points about the LIBERAL voter. Historically in the old Industrial parts of the Country many of the blue collar electorate (families) chose the middle of the road party, under whatever name the Liberals were using.
The outcome of this election will be decided how these areas vote to achieve Brexit or not. For many of the 17.4 million a vote for a Conservative is a step too far, the BP might not be.
The Labour voter who also voted to leave should be made aware of the Article 50 and Withdrawal Act legislation should Labour win or form a coalition. Can Labour re-nationlise under EU rules.

The inevitable collusion between the utterly warped LibDems and every other cynical 'power at ANY cost Parties', should make it obvious to Boris that it is imperative for him to liaise with other pro-Brexit Parties in order to achieve the clean break agenda which he appears to have abandoned so quickly.
His arrogance and insultingly dismissive attitude may well be his undoing. We need the strength provided by unity against a completely deranged juggernaut of Remainers.

I am already hearing leavers talk about losing Brexit or splitting the vote.This is exactly what the tories want us to think.The most important aspect of all this is that the current withdrawal treaty is exactly Brino. Boris Johnson and the conservatives have shown that they will not truly deliver Brexit.The Brexit party will let everyone know that this treaty is a Hoax. We must at this Essential stage support the Brexit party.
We will see the establishment trying to ruin them,And the leave cause over the coming weeks.We must stand strong.
If all leavers voted for the Brexit party we would get it. The other parties are for remain,the tories are for a fake Brexit.
I have served my country.I have lived,loved,And have massive pride in Great Britain which is my home.I am optimistic about the great future a true Brexit will bring. I will be voting for the Brexit party.

Good for you Ashley(3) I hope lots of others vote Brexit party. I don’t trust the Conservatives any more as they no longer are conservatives.

I have just read Martin Howe's article, I respect his previous legal assessments of the WA and PD.
His current pragmatism and acceptance of the Irish Sea Customs border and minor changes, does not advance the UK one step forward in leaving the EU.
It will be for the new Parliament to vote on the Withdrawal Act, to pass it or reject it.
Knocking Nigel Farage and the Brexit Party is counter productive. The BP has gathered support from the leave electorate and their gaining a Parliamentary presence is the only way the H o C impasse can be broken. Leave voters are angry and may well destroy Boris Johnson's premiership if he does not agree a pact

Some may say that the Libdems are at least 'honest' in their approach. If they were liberals they would be open-minded, but they are not. If they were democrats they would accept the result & once implemented, campaign to rejoin, but they're not.
Not only are they actively trying to overturn a democratic mandate & colluding to undermine our country with a foreign power, but they are also disingenuously deceiving their own voters. They have never explained what 'remaining' actually means to their voters. They appear to ply the illusion that everything will remain as is, which it certainly would not. Some time ago, their previous leader, Vince Cable, was asked about his 'red lines' for the EU. Having to adopt the Euro was one of them, yet it is written into the Treaties. There were others, leaving the distinct impression that they live in a fantasy world. What would they do when these 'red lines' are inevitably breached? Campaign to leave? They are peddling a dream, not reality, and like the others are deceiving the public in their quest for unaccountable power. Do they really think that if they got their wish that ANY demand would be met with anything other than a slap down & 'be quiet'.
We will not get what we voted for by voting for something different. The MayBo Treaty is not leaving. If it was, where is the evidence in the Con manifesto? It's supposed to cover FIVE years. The plans to grow and reap the benefits & mitigate potential issues of leaving? There are none because it's not leaving, but another can-kicking exercise. It is an International Treaty that will bind the hands of future 'Govts', otherwise known as EU Parish Councils until we leave. If that's the 'best' that they can do in 3.25 yrs, they don't deserve to be in power. Do not listen to Project Fear.

I refer you to my comment under yesterday's article.

Interesting question.
-
It is difficult to know whether the 773,000 Liberal Leave voters of 2016 supported the Liberals still at the 2017 election, but as their vote changed from 2415916 votes in 2015 to 2371861 in 2017, it seems likely they did.
Of interest was the collapse of the Green vote, 2015 (1111603) to 2017 (525665) - due to rise of Corbyn - labour Milliband 2015 (9347273) to Corbyn 2017 (12877918).
-
It is difficult to understand why Liberals and Greens are not Leave parties instead of Remain parties:
Leave means making your own laws, getting out of the Common Agricultural Policy and Common Fisheries Policy that have been so damaging to our environment. It gives us the opportunity to end factory farming in the UK and dramatically improve Animal Welfare. It gives us the ability to set our own standards in so many areas of life. Our Independence is far better for a healthy democracy than being ruled by unelected officials from Brussels. The Brexit Party's 'Changing politics for Good' promotes proportional representation and many other political changes that the Liberals have been campaigning for, for decades. It gives all peoples an equal status in migration-access to the UK, not just reserving it for White Europeans. It seeks to trade with all nations of the world, particularly our Commonwealth friends who we abandoned on joining the EU; and it will improve the prospects of African nations through open trade far more than it would through EU aid programmes. We can have our own foreign affairs and defence policy, not be dragged into dangerous conflicts and wars by the expansive EU empire (or internal suppression of EU people - eg Catalonia, Gilets Jeunes). We have our own economy, economic policy and taxes; not ones carefully aligned to be non-competitive with the EU - a thriving economy giving us so much more scope to achieve liberal development of this country if we wish.
Peculiar times we live in.

Trump reaffirms that there can be NO TRADE DEAL with the US if Johnson's Fake Brexit is pursued:
"Yet last night the President re-stated his position in an interview on the South Lawn of the White House.
He said: "We’re far and away the number-one economy in the world. And if you do it a certain way, we’re prohibited from trading with the UK.
"That would be very bad for the UK because we can do much more business than the European Union."
Trump also restated his calls for Boris Johnson to form an election pact with Nigel Farage...."
https://www.mirror.co.uk/ne...

Interesting perspective from Doug Nicholls, chair of Trade Unionists Against the EU.
https://www.spiked-online.c...