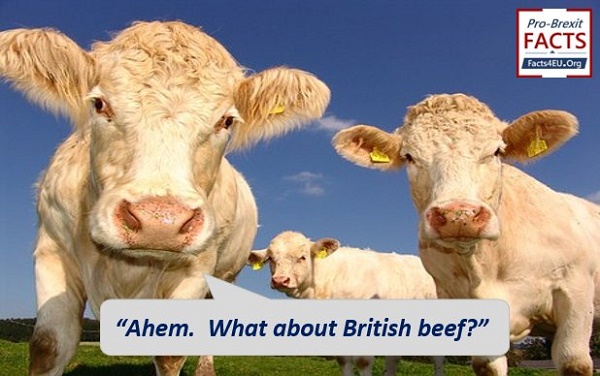 Yesterday in Beijing the EU Commission concluded 13 years of negotiations on the ‘protection’ of 100 food and drink names which are exported to China.

The EU Commission hailed this yesterday as a ‘Landmark agreement’.

The EU's non-trade deal with China

What does this ‘deal’ do for the UK?

All this proposed EU deal with China will do is to offer some protection for the names of products such as Münchener Bier from Germany, Cognac from France, and balsamic vinegar from Modena, Italy.

Meanwhile, the UK government agrees a beefy deal with China

On 18 October the UK and China agreed a lifting of sanctions against British beef exports to China.

The British beef industry is set to benefit from an estimated £230 million boost, and the first exports are expected to start being shipped in the next few months. 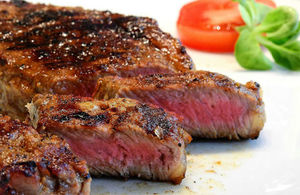 This follows work by DEFRA and the Agriculture and Horticulture Development Board (AHDB), in partnership with Quality Meat Scotland (QMS) and Hybu Cig Cymru (Meat Promotion Wales HCC) and other industry bodies, as well as FSA and DAERA in Northern Ireland, and other government departments and agencies.

“This is a great end to a very successful year for our red meat exports. This new agreement is fantastic news for our beef processors who will now have access to another market outside of the EU.”

The EU Commission’s proud announcement of the ending of negotiations with China on 100 agri-food product name protections – almost two-thirds of which involve just France, Italy and Spain – will no doubt be a load off the minds of Brexit Facts4EU.Org readers.

True, the proposed deal is not expected to be ratified until the end of 2020 (which almost certainly means 2021) but it’s a start. And let’s face it, it will have taken them 15 years of work by then, so readers will no doubt wish to make a diary note for 2021 to offer their congratulations on a job well done.

On a more serious note, the news that British meat will shortly start being sold in China is great news for many British farmers across all corners of the UK.

This news came out two weeks ago, but the fact that it was good news for farmers in a post-Brexit Britain seems to have made it un-newsworthy for the BBC. Perhaps it didn't help that this deal had no EU involvement. We thought readers might like to be informed.

The overall message here is of course that the EU Commission always seems to spend inordinate amounts of time on matters of no real benefit to the UK. Where are their priorities?

The other basic fact is that the vast majority of the world’s countries already sell into the EU perfectly successfully, without any trade deal at all.

Gearing up for the election

We hope readers found this article to be interesting. If so, please consider donating today. We have so much to do and yet so few financial resources with which to accomplish everything. We really can make a difference, with your help. Quick and secure donation methods are below.

Readers may also wish to consider becoming Sponsors of our series of factsheets under the 'Brexit Fightback Initiative'? We are inviting readers to help by becoming a Sponsor (£10 donation), a Gold Sponsor (£50 donation), or a VIP Sponsor (£100 and above). We will not publish your name unless you give express permission, naturally, and your contact details are never used.

[ Sources: EU Commission | DEFRA ] Politicians and journalists can contact us for details, as ever.

For some reason I have some reservations regarding China in relation to brand protection. I can just see the following new Chinese brand names coming, can’t you?
Mockarella cheese, Longduck wine, Muchnicer beer…

Timely article.
Talking about beef, to say Ireland was very unhappy about the Mercosur agreement is an understatement - beef floods into Ireland, cheap.
Last I heard the agreement was in stalled mode, though, because of the fires in the Amazon basin - Austria kindly stepped in and refused to sign (Ireland didn't have the temerity to do so).
The EU is notoriously slow in its trade negotiations. Cliche. Most are not free trade deals. I'm not sure the free trade deals are actually worth having - even before the Japan one comes into effect, the result is that Japan shuts down its car plants in the EU as it can now make them in Japan and still sell them tariff-free in the EU. And South Korea can bid for all those shipbuilding tenders in the EU.

This is from Sir John, today:
'... Free Trade Agreements can add a bit to trade by removing the remaining tariffs and a few other barriers that still exist under WTO rules. They are nice to have but not essential. It would not be worthwhile making big sacrifices to get one. They are gently mutually beneficial and for that reason countries do not pay to get them....'
This completely undermines the Tory Party's stated policy of signing up to the WA in order to get the benefits of a FTA (starting In perhaps 3 years time - and a lot longer probably, going by today's BrexitFacts4EU article). As said yesterday, there is absolutely NO REQUIREMENT to sign a Withdrawal Agreement. So clearly the Tories have another hidden agenda in signing up to the withdrawal agreement, an agenda with little economic benefit it would seem - but one obtaining a political 'close and special relationship', one that keeps us closely aligned to the EU, so close in fact, that it would be sensible to rejoin the EU rather than accept a vassalage 'Half-in, Half-out' status. This is what Boris means by 'Get Brexit Done'. He has just re-hashed May's Surrender Treaty, and given away Northern Ireland to boot.
-
"...The European Commission said on Wednesday the EU had simply made 'clarifications' to Theresa May's Brexit deal, and it had not amended it at all....".
https://www.theneweuropean....

It is true that there is no requirement to sign a Withdrawal Agreement, but not doing so isn't going to lead to some kind of WTO Nirvana.
What you will actually get is 'Benn - The Sequel', and Article 50 will be extended again (and again, and again).
That 'clarifications' article has been shown to be quite evidently false. Even the rabidly remoaning 'The Independent' admits that.

Chris, when Boris announced he had got a 'Great New Deal' from the EU, care to explain why Merkel, Junker and co we so keen to congratulate him, backslapping, hugging and kissing him as if he was some long lost son returning to the family?
Doesn't that tell you all you need to know about Johnson's Great New Deal?

And the alternative?
It isn't WTO - that's deluded wishful thinking.

Comment 6 James Bertram, yes indeed that said a lot that short bit of video. They cannot belief their luck to have such poor 'negotiators' in the UK. Great new deal my foot. More like the disasterous old deal reheated and microwaved.
The Conservatives are so arrogant and full of themselves right now, just like when Cameron thought they had clinched the Referendum.
Meanwhile the others are making alliances and the Conseravtives seemingly refuse their only hope of winning, unless in the background they are making an alliance with TBP. I sincerely hope they are for their sakes.
One good thing is the biased speaker has gone and almost 60 MP's are gone before they got pushed. It is not all bad news.

Chris,
The election had to take place to sort out the impasse in Parliament. Now the Public vote will hopefully give one one of the two main parties a mandate. We have our preferences here.
The only thing that can be said in favour of the WA is that in a hung Parliament (Leave/Remain) the WA ends the Article 50 and its extensions, no more Benn Acts, it moves things on. On Article 50 it has never been legally established that paragraph 3 allowed for more than one extension, it is not in the wording so it is an assumption, just likes the conditions and length.
The revised Brexit deal is available at EPRS-BRI(2019)642260-EN
The EU (Withdrawal Agreement) Bill had its second reading but the timetable was rejected.
"In affording a third extension, the EU has confirmed that it will not renegotiate the deal during the extension." This means the purpose of the Benn Act is removed, it can longer carry out its aim. The aim of the proposers to prevent a No Deal exit is revealed.
The Conversation: "But there are also some key differences between this extension and the last two. It has been requested due to the legal obligations placed on Johnson rather than his acceptance that it is needed. In fact, the British prime minister – in addition to agreeing a much harder version of Brexit than his predecessor – has repeatedly said that he didn’t want an extension and that he would rather take the UK out of the EU without a deal. The latter has not been well received by EU leaders. As the EU’s chief negotiator Michel Barnier put it: “No deal will never be Europe’s choice … it would always be the UK’s choice, not ours.”
Hopefully it will be Boris Johnson with the majority, so we may have a NO deal after-all.

Sydney, I hope you are right.
Electoral Calculus is currently predicting a Tory overall majority of 96 seats, with the Brexit Party getting 0. However, their track record is poor.