VIDEO: “I believe that this Thursday can be our country's Independence Day”

We take a look back at happier days 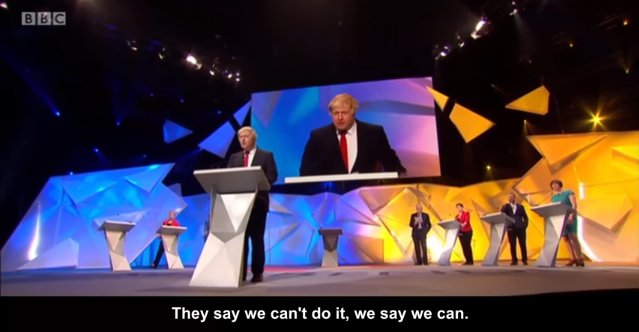 During the 2016 UK referendum, two designated official campaigns led the way. One for Remain and one to Leave the EU. The Leave camp also had a major unofficial campaign called Leave.EU, fronted by Nigel Farage. In this article, Brexit Facts4EU.Org takes a brief but positive look back at the closing remarks of Boris Johnson at the BBC EU Debate on 21 June, 2016.

The British electorate can sometimes lose sight of the democratic victory which was achieved against all odds. Our democratically elected Parliament had a majority of Remain-voting MPs, who thereafter attempted to subvert the will of the majority electorate. (An extensive list of all we were up against may be found in a previous article).

It is generally considered that Boris Johnson was the leading speaker of the Official Leave campaign. Voters on both sides of the argument knew why they voted, as they do in all other elections/referenda, and Mr Johnson’s closing speech in 2016 was clear.

Three days later the largest mandate in British history instructed Parliament to "Leave the European Union”. A pointless 2017 general election backed up the 2016 referendum, where the main parties guaranteed they would honour the referendum result, and over 80% of the electorate voted in good faith for MPs on this basis.

It was understood we would exit EU political institutions and remain on friendly terms, but NOT be governed by Brussels. The referendum result could have gone either way. In those halcyon days it was a given that either result would have been accepted under the convention of 'losers’ consent'.

Sadly, parliamentarians have since changed the rules and have ignored our longstanding democratic values because we didn't give them the result they wanted.

The following short video shows the winding-up speech given by an optimistic Boris Johnson, and reminds all readers why we voted.

Whether one voted Remain or Leave, there can be little doubt Boris Johnson gave an uplifting speech of how beneficial our leaving will be for the UK, and also for all those in the EU27 who have no possibility of voting for their own freedom.

Below is a transcript of Mr Johnson’s speech, for those unable to watch the video as they read this article.

"At the end of this campaign, I think you'll agree, there is a very clear choice between those on their [Remain] side who speak of nothing but fear of the consequences of leaving the EU and we on our [Leave] side who offer hope. Between those who have been endlessly rubbishing our country and running it down, and those of us who believe in Britain.

"They say we can't do it, we say we can. They say we have no choice but to bow down to Brussels. We say they are woefully underestimating this country and what it can do.

"If we Vote Leave we can take back control of our borders, of huge sums of money - £10 billion a year net, of our tax raising powers, of our trade policy, and of our whole lawmaking system, the democracy that is the foundation of our prosperity. And if we stand up for democracy we will be speaking up for hundreds of millions of people around Europe who agree with us but who currently have no voice.

"And if we Vote Leave and take back control, I believe that this Thursday [23 June, 2016] can be our country's Independence Day”.

This closing speech by Boris [now Prime Minister] Johnson ends with huge cheers of approval before a large audience.

Finally, take a look at our picture at the top of this article again. Note the BBC's use of a blue and gold backdrop - the colours of the EU flag. It seems the BBC just wanted to be clear to viewers about which way they should vote, regardless of anything Boris Johnson might say.

It’s extraordinary to think that Mr Johnson gave that speech over three years and four months ago. Brexit Facts4EU.Org continued publishing the day after the Referendum and every day since, as we didn’t believe that the result would be implemented properly by a Remainer Establishment.

That said, even we did not believe we would experience the shameful behaviour of a Remain-dominated Parliament to the extent we have witnessed for more than three years. We can only hope that the coming election will clear out some of the disgraceful individuals who have betrayed democracy in the United Kingdom.

Unfortunately a significant number of these people will be returned to Parliament. Clearly the SNP, LibDems, Plaid Cymru, and the Greens are beyond the pale. The vast majority of Labour Party candidates also fall into the ‘block Brexit’ category. One of our biggest concerns is how the Conservative Party are allowing extremist and anti-democratic arch-Remoaner MPs to stand for re-election.

We will name and shame these individuals when the full lists of candidates are definitively known.

Gearing up for the election

We hope readers found this article to be interesting. If so, please consider donating today. We have so much to do and yet so few financial resources with which to accomplish everything. We really can make a difference, with your help. Quick and secure donation methods are below.

Readers may also wish to consider becoming Sponsors of our series of factsheets under the 'Brexit Fightback Initiative'? We are inviting readers to help by becoming a Sponsor (£10 donation), a Gold Sponsor (£50 donation), or a VIP Sponsor (£100 and above). We will not publish your name unless you give express permission, naturally, and your contact details are never used.

"The past is a foreign country; they do things differently there."
(L.P. Hartley, The Go Between.)

Thank you for reminding us of that.
We voted to 'Leave the European Union'. We voted to be a free and independent country.
There can be no compromise on that.
We did not vote to sign up to another EU Treaty. We did not vote to annex Northern Ireland to the EU. Johnson's and the ERG's capitulation is not a practical compromise, it is a cowardly betrayal of fundamental principle.
No surrender.
I shall vote for the Brexit Party.

Good for you James Betram (2), if I still lived in the UK I would be helping the Brexit party as it is I have donated.
I listened to Nigel Farage from Carlisle and I still believe he is the only person speaking total sense about the EU. Couple that with what UK Column says about Defence in particular and I understand the nasty party = Lib/Lab/Con.
The system is being shaken up, many MP's 70 I believe now have stood down/not standing in GE. So this is something to celebrate.

The only MP standing down that I am sad about is Kate Hoey as I think she is a good person. I hope she decides otherwise.

I am a paid up UKIP member and also treasurer of my local, small, branch.
I am hoping that they will be a Brexit Party candidate in my constituency. I shall be voting for him/her in any case as I regard all the other main parties as being pro-remain.
I am just hoping that enough people who voted to leave realise that the Brexit Party is the only hope at the moment. Neither UKIP nor For Britain has enough support at the moment to make a difference.

Great comment Michael Wood (5) - I agree but imagine this, if all leavers voted ONLY, TBP, UKIP, For Britain, Veterans For Britain - wherever possible and otherwise Conservative as the very last choice, ignoring Labour and Liberal this would send the right message to the political class.

Do you trust the Tories?
-
Here is direct misinformation by Owen Paterson, a prominent member of ERG, and picked up by many of his respondents on his twitter thread, making the pretence that Johnson's Surrender Treaty is somehow a Canada Plus deal:
https://twitter.com/OwenPat...
'... “Brexit under a Canada Plus deal (essentially the @BorisJohnson deal)...'
-
The Tory Party will say anything to get your vote.
I even had one notable Tory 'Leave' MP email me this recently:
'... Even Boris’ deal has the option of WTO in it but Parliament votes against that too.
That’s why Boris is calling an election so he can leave without a deal...'
-
Never trust a Tory.

He is quoting from Prof. Patrick Minford.
Is he lying too?

Economic Forecasts, Fisal Islam for the BBC produces them by the dozen from NGO's and Think Tanks.
What do you want - good or bad - made to order.