ANGELA MERKEL’S 1.3 TRILLION REASONS TO BE NICE TO THE UK

Over the past 20 years, Germany has sold €1.3 TRILLION of goods to the UK 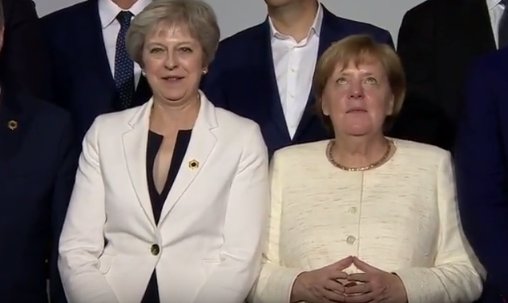 As part of our work providing a perspective on the EU to the public and to MPs, we monitor the official statistics agencies of the EU member states.

Below is the information which Germany’s statistics agency Destatis has provided to the EU Commission, showing the extraordinary extent of Germany’s sales to the UK in the last 20 years. This is the latest information and it includes 2018. 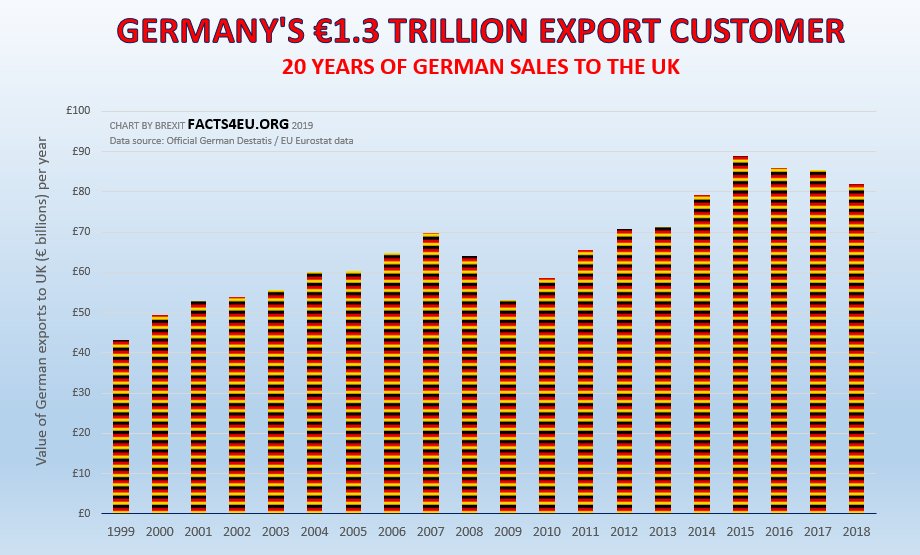 The UK is a big market

Germany’s largest export market isn’t the UK – that’s the USA, just like it is for the UK – but the UK is nevertheless a massive customer for German businesses.

The UK bought over £70 billion (GBP) of goods from German companies in 2018. Sadly, the Germans have been less keen to buy from the UK. Last year they bought less than £32 billion in goods from British companies. That’s less than half as much as we bought from them.

And that’s without getting a trade deal in return

In the last 20 years, Germany's trade surplus with the UK has been a staggering €0.75 TRILLION Euros

There is a reason why we conduct our research into the facts surrounding the UK’s EU membership and why we go to official sources in the EU. They so often illuminate the one-sided nature of the relationship.

While Remain MPs stand up in Parliament and rain down platitudes and vague statements about the benefits of EU membership, how many know the first thing about the facts and figures?

Sadly, with the Treasury being the high temple of Remoanerism in British Government, these Remainer MPs will not get any useful facts out of them. Well, in a sense they will, because the Treasury’s mission under Philip Hammond is to present the worst possible forecasts of calamity, should the UK leave on WTO terms in 3 weeks’ time.

However we deal in facts, not forecasts.

Remain MPs are constantly asking for “impact assessments” of Brexit, knowing full well that the Treasury has proved itself to be monumentally incompetent in providing all such estimates, since before the Referendum. They haven’t just been wrong, they have been wrong on a truly epic scale. In business, they would have been fired, but....

The figures we have presented above are facts, not forecasts. They come from the well-respected and official German government statistics agency, Destatis.

If nothing else, these figures show just how much Germany has benefited from the UK being part of the EU for decades. More importantly we believe that information like this is essential for all MPs, so that they begin to understand that the UK has always been in a strong negotiating position with the EU.

The problem is that the Government has been thoroughly defeatist from the very beginning.

As it's about Germany, it's perhaps worth repeating 2 comments at the end of yesterday:
7. A Bruce , Wednesday, March 06, 2019, 20:51:
I'm not quite sure how to take this: https://uploads.disquscdn.c...
If, as it seems, it is true - the scale of the treason is almost unbelievable.
https://uploads.disquscdn.c...
8. Concerned Expat , Thursday, March 07, 2019, 05:38:
A Bruce, thanks for that this seems very similar to what UK Column were saying yesterday. I would say even if 10% of that is true, no wonder we are almost 3 years after the most momentous vote in our country's history in a vacuum.
Yesterday also Corby and his Tory vagabonds were having a meeting. Scheuble was mouthing off about the use of the EU army........
I can well believe more than 50% of that article is true as the UK enters a dark age brought down by the eu - unless a miracle happens.

A further update regarding Bruges group link I posted yesterday. The author has answered some of the questions re its veracity.
https://uploads.disquscdn.c...

also further comment from John Petley here:
https://www.google.co.uk/ur...
Extract: '...The absence of documentary corroboration for the transcript will inevitably lead to these claims being dismissed as conspiracy theory, but veracity is bolstered by contextual evidence. We know May met Merkel before Chequers – that is not disputed. My informant was shown the document but was not allowed to take it away, due to the risk of severe consequences for the exhibitor. However, it would be justifiable for a British parliamentarian, perhaps from the ERG or DUP, to request a copy of the minutes from the German administration. Of course, Berlin might refuse, but there is a strong moral case here. The British people have a right to know what was discussed about their future with a foreign power, and whether there is any truth in these scandalous allegations.
If this account of the meeting is true, the Withdrawal Agreement was written within the German administration, and our ministers and MPs are being bullied and cajoled into passing this into law by a Prime Minister who seems far more interested in pleasing Chancellor Merkel than the 17,410,742 voters who delivered their verdict on the EU in June 2016.'

When it comes to Brexit, the largest purveyors of fake news are the BBC ITV, Sky and most of the printed press so your research, i.e the facts, will never be used by such organisations nonetheless, keep up the excellent work!