Kyrgyz Republic – You can’t say it or place it, but the EU just spent more of your money there

Welcome to what the EU really is

On Sunday the EU’s de facto Foreign Secretary, Federica Mogherini, flew to the capital city of the Kyrgyz Republic (Кыргыз Республикасы). The capital has the mercifully short name of Bishkek, and readers may be forgiven if they have never heard of it.

Ms Mogherini, whose full official title is 'High Representative for Foreign Affairs and Security Policy/Vice-President of the European Commission', led an EU Commission delegation of worthies on a visit to pledge more money in the region.

She presented a set of ‘EU funded’ programmes. Coming on top of almost £1bn (€1.1bn) of bilateral and regional assistance for the period 2014-2020, these programmes are intended for “the environment, climate action, sustainable consumption and production, energy, gender equality, counter-terrorism, and education”. The countries involved are Kyrgyz Republic, Kazakhstan, Tajikistan, Turkmenistan, Uzbekistan and Afghanistan.

“Our new Strategy for the region will enable us to cooperate more closely with the countries of Central Asia in tackling the challenges they face: from sustainable development to economic diversification, strengthening civil society and human rights to providing expertise and financial support for reform processes.”

Example of the use of funds

Part of the new funding announced on Sunday goes to the country Ms Mogherini visited: the Kyrgyz Republic. It is focused on education but it will not actually help to fund teachers or schools.

Instead it will be used by Kyrgyz officials to develop “education strategies”. Here is how the EU described it :-

“This financing agreement will support Kyrgyzstan's education development strategy, in order to better formulate, implement and monitor education policy. It will help to improve resource allocation, ensure equitable access across gender, ethnicity and linguistic background, and enhance the synergy between skills and labour market needs.” 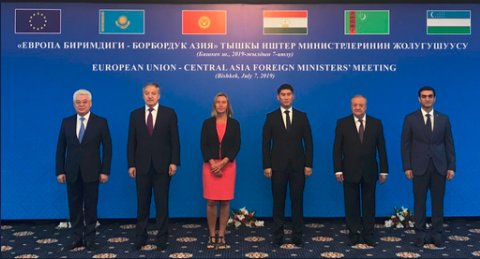 In 2013 the parliament of the Kyrgyz Republic passed a resolution banning women under the age of 23 from travelling abroad without a parent or guardian, with the purpose of “increased morality and preservation of the gene pool”. The principle language is Kyrgyz and Islam is the dominant religion, with 90% of the population reported to be Muslims according to the latest Pew survey.

The Kyrgyz Republic is the 142nd country in the world by GDP (tied with Kosovo), according to Madame Lagarde’s IMF. As far as we have been able to determine, it is poor but there is no famine there. The latest funds from the EU taxpayer are to subsidise the development of the Kyrgyz government's education policy.

The point of this article is not to debate whether a government such as that of the Kyrgyz Republic should be supported or not.

The key question is what the EU is doing there and why it should be spending British taxpayers’ money, with no discussion in the UK Parliament and no say by MPs over the amount or the purpose of these funds. This is about soveriegnty and democracy.

This is not what we signed up to

On 01 Jan 1973, the United Kingdom joined the EEC – the European Economic Community, commonly known as “the Common Market”. In the Referendum which was finally offered to the British people two years later in 1975, no-one was asked if they wished to stay part of an organisation which would become a de facto and undemocratic superstate, assuming powers from elected national parliaments across Europe.

The EU’s foreign adventures have not produced the most favourable outcomes. In the Balkans NATO had to step in. In Ukraine, the EU’s attempts to move that country closer to EU membership have resulted in half the country being annexed (Crimea) or de facto in Russian hands (East Ukraine).

On Sunday, an unelected EU Commissioner (Ms Mogherini) signed documents committing the EU to expenditure and closer alignment with a variety of former USSR/CIS states. To our knowledge, none of this has been debated in Parliament and none of it is formally part of British foreign policy.

The key questions for Remain MPs and Remain voters here are :

We believe that perspectives like these are important. The only reason readers will not see this news elsewhere is because few British organisations report on the workings of the EU. Perhaps if they did, Remain MPs and more of the public would understand what the EU is. If you can help us to keep going, exposing the reality of the EU to the wider population, quick and secure donation methods are below. We rely 100% on people like you.

[ Sources: EU Commission External Action Service | Kyrgyz newspapers and TV | IMF ] Politicians and journalists can contact us for details, as ever.

Thanks for the clarification (Comment 9). It's one thing doing these things if they are subject to democratic oversight, and quite another if it is all decided behind closed doors.

History has a habit of repeating itself, but humans always think that this time it'll be different. Oh no it won't! The higher they reach, the harder they fall. And the UK will not be holding out a safety net. As Ann Widdecombe said in the EU Parliament the other day, 'We're orf!' Bless that woman. Now she WILL go down in history for standing up for our rights. Whereas 'May' will just be a dirty word.