“Manufacturing in deep trouble” – except that this is happening in Germany

Brexit Facts4EU.Org brings you bad economic news – but even the BBC can’t say this is “due to Brexit” 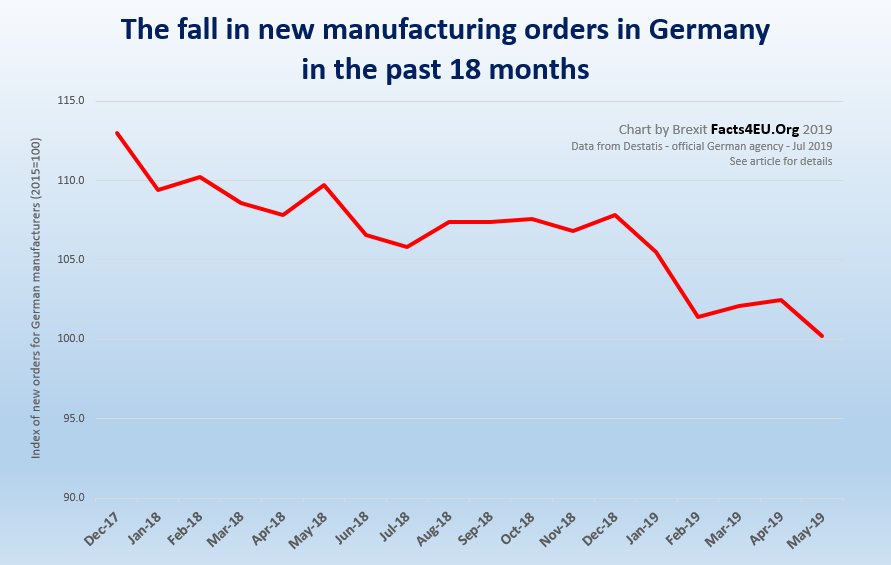 German manufacturing orders have fallen 11.3% in the last 18 months

Yesterday Germany produced its latest figures on the state of its manufacturing industry. They present a worrying picture for that country. With Germany being the economic powerhouse of the Eurozone, this is equally bad news for the EU.

These disastrous figures follow the news last month that the German Government's forecast for economic growth this year has been slashed to just 0.5%. This is less than half that predicted for the UK (1.2%) by the UK's Office for Budget Responsibility.

“The Federal Statistical Office (Destatis) reports that price-adjusted new orders in manufacturing had decreased in May 2019 a seasonally and calendar adjusted 2.2% on the previous month.”

This large monthly fall comes on the back of a trend which has developed in German industry over the last 18 months, since late 2017.

If this happened in the UK, the BBC would no doubt say it was “due to Brexit”. However as far as we are aware Germany has not voted to leave the European Union.

Below we present official data researched from Germany’s ‘Destatis’ – their equivalent of the Office for National Statistics in the UK. It shows the continuing decline of German manufacturing over the past 18 months.

Remain MPs will of course point to global factors, and will no doubt try to blame Donald Trump for his policies in backing US business. Sadly for Remain MPs, this argument doesn’t hold water. The fall is not only from Germany’s EU27 customers or its global customers – it’s almost as bad in its home market, with a fall of 9.4% in the past 18 months from domestic customers. 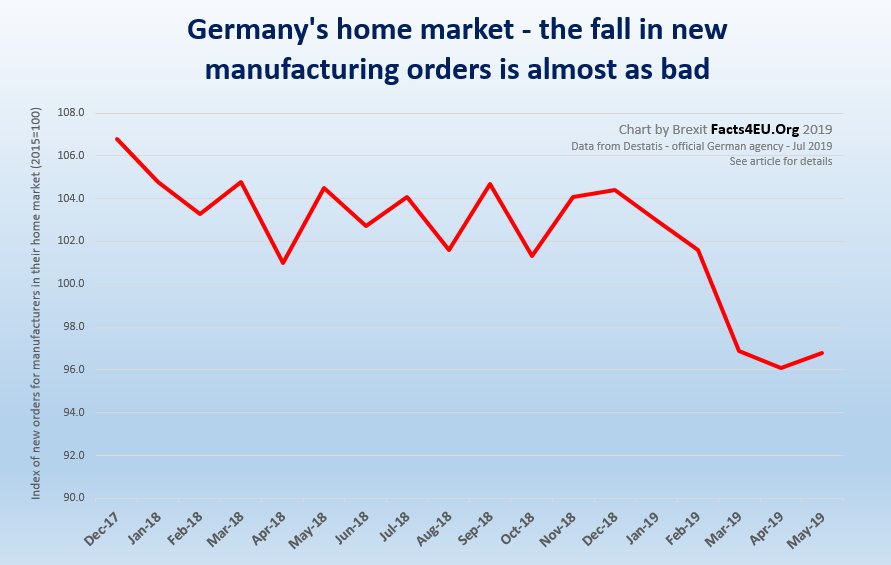 Statistical note: We have used calendar and seasonally-adjusted data, exactly as per the German statistics agency, which presents a balanced picture.

Why should any of us care about German economic data?

The news we bring you from Germany yesterday is not about the details of how the German economy is faring. It’s about Brexit.

We fully expect the federalist fanatics in the EU to make life as difficult as possible for the UK. We have no doubt that it will be a bumpy ride at first. Readers only have to look at how Switzerland was treated by the EU last week to see this. (We would love to publish what has happened, but currently lack the resource to do so.)

This article has been researched and written to show that the largest economy in the EU is having difficulties. And this is VERY bad news for the Eurozone, and for the UK’s exposure to EU debts under Theresa May’s abominal ‘Withdrawal Agreement’.

We hope that by publishing this news from Germany yesterday, it will help to show the BBC and Remain MPs that not everything is “due to Brexit”, and that some other countries are managing to have troubles without even talking about leaving this sclerotic institution.

This weekend we really could do with your help to keep going. If you like what we do, perhaps you could consider a donation? We rely solely on generous members of the public. Quick and secure donation methods are below. Thank you.

[ Sources: Destatis - official German Statistics Agency ] Politicians and journalists can contact us for details, as ever.

Oops, I have a confession to make. Last year I switched from buying a German car back to good old British. I know other people who have done the same. Sorry Germany if it's partially down to us.

I lived and worked in Crete for nine months and in France for three years. Since the EU declared 'war' on the UK electorate in 2016 I have not travelled in EU countries, nor spent my money on goods and services with any EU country hostile to the UK.
Once we're out of the EU and are a free, independent, sovereign nation once again I will be the first to be buying Champagne, eating moules et frites and taking selfies at the Brandenberg gate.
Love Europe. Hate the EU.

Manufacturing, I will start with a question is there a demand by the Public for electric cars?
Politically correct Politicians in Western Europe are getting carried away with zero carbon and EV's as an answer.
Electric cars with electric motors and batteries are probably easier to build than petroleum fueled ones. Selling them and building the recharging infrastucture will be the difficult and expensive bit.
Buses and HGV's are yet to appear (A big milk float).
Germany has become very dependent on its motor industry with its diesel engined cars world wide sales. Will Germany ban them from its roads?

Further to Sydney's big point about Germany's dependency on its motor industry, that dependency has spread to Slovakia, and France is also desperate for its motor industry to do well. I think that's a big reason why the Mercosur trade agreement has been pushed through. But Ireland - backstop Ireland, of course - is not a happy bunny about this at all. Nor are the French farmers. Trouble in the ranks!!

It NEVER has been about hating or even disliking the European people but having complete CONTEMPT for that whole federalist project; UK just doesn’t need it!