Astronomical delays, rocketing costs, and now the EU is lost without the US GPS system 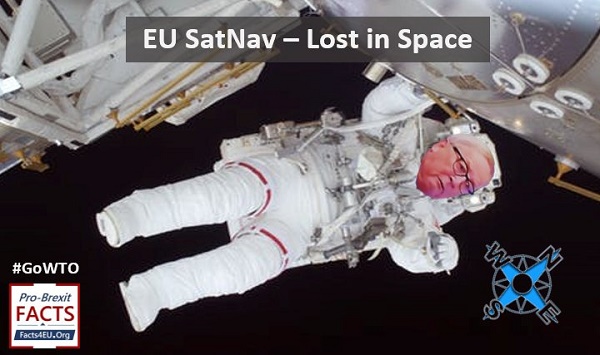 A microcosmic example of the EU, courtesy of Brexit Facts4EU.Org

The EU’s £17.5 billion Global Navigation Satellite System (the EU’s equivalent of GPS, named Galileo) crashed on Thursday afternoon, 11 July 2019. All of its satellites have been out of service since then, meaning a total loss of service for the last five days. At the time of writing the system is still down.

The impact of this

Users including the emergency services have been unable to access the system at all for the past five days. Here is what the EU’s agency wrote about this eventuality, when they were justifying the reason to have the EU’s own GPS system :-

“Just think what would happen if GNSS [GPS] signals were suddenly switched off. Truck and taxi drivers, ship and aircraft crews and millions of people around the world would suddenly be lost. Furthermore, financial and communication activities, public utilities, security and humanitarian operations and emergency services would all come to a standstill.”

What the EU Commission has said about this

Bizarrely, the EU Commission has made no mention of this total failure of one of its flagship projects on its press release website. Instead they left it to one of their agencies: the ‘European Space Agency’, based in Prague.

On Thursday the European Space Agency announced in a Notice Advisory to Galileo Users (NAGU) that :-

“Users may experience service degradation on all Galileo satellites. This means that the signals may not be available nor meet the minimum performance levels.”

This notice was subsequently upgraded a few hours later and they officially put all 22 of their active satellites in the “not usable” category. They then declared :-

“Until further notice, users experience a service outage. The signals are not to be used.”

The EU’s SatNav system has been beset by astronomical delays and rocketing costs since it first started back in 1994. 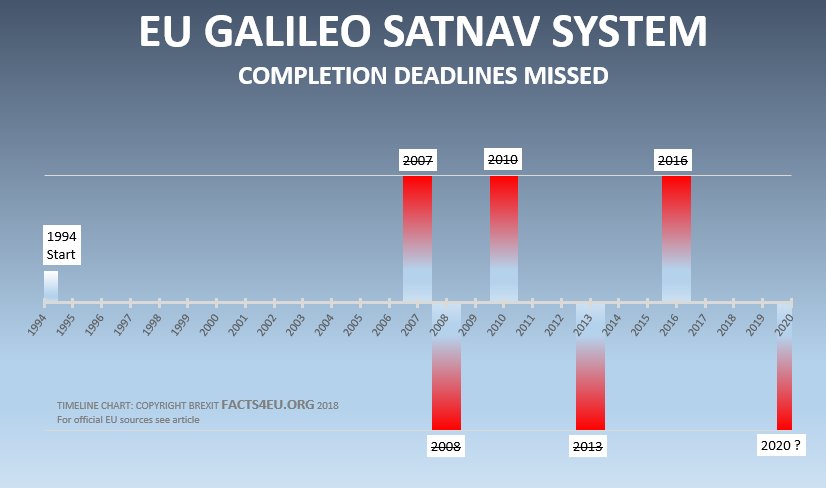 “The European Commission has overall responsibility for the programme, managing and overseeing the implementation of all activities on behalf of the EU.”

In January 2018 the Commission declared that the UK would not have full access to the system, despite the UK having borne over £1bn of the costs. Nevertheless the UK continues to contribute funds to the programme to this day. 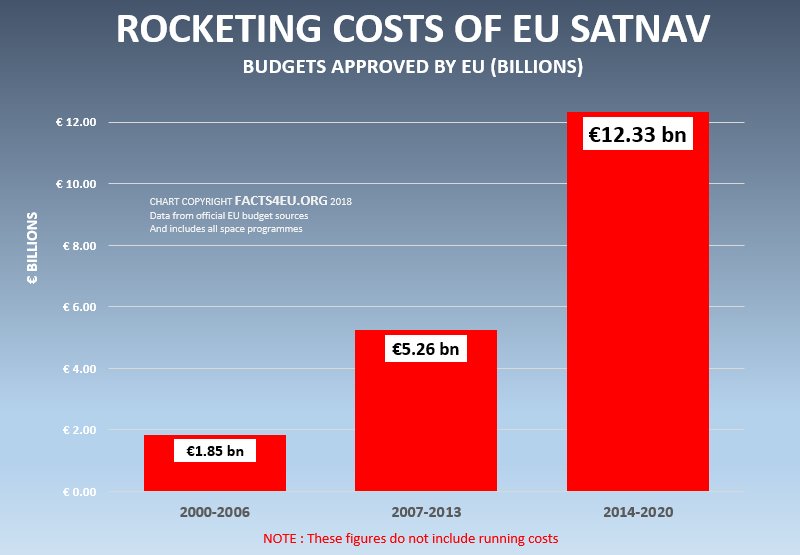 It’s important to note that the above figures only show capital costs, and exclude the enormous ongoing running costs of the EU’s GPS system.

“Today the Commission adopted a decision to transfer the back-up site of the Galileo Security Monitoring Centre from the United Kingdom to Spain. The Galileo Security Monitoring Centre (GSMC) is a technical infrastructure which plays a key role in ensuring the security of the EU's satellite navigation programme Galileo, including its Public Regulated Service (PRS). As a consequence of the United Kingdom's withdrawal from the EU, the GSMC's back-up site needs to be relocated.”

The EU likes to announce things

Unfortunately, on the same day the Director of the European Space Agency's Galileo programme said :-

“Much work remains to be done. The entire constellation needs to be deployed, the ground infrastructure needs to be completed and the overall system needs to be tested and verified.”

Some may feel that the words of the leading scientist from the EU’s space agency may be a truer representation of the overall project picture than that given by EU Commission, particularly in light of the events of the last five days.

Last year Brexit Facts4EU.Org published the definitive guide to the EU’s Galileo SatNav system, comprising a 7-part series of reports. These are all available via our ‘Brexit Index’ – the largest searchable repository of Brexit facts in the world, with over 1,100 articles and many thousands of facts.

We pointed out that the EU’s Galileo GPS system was typical of the EU in many ways. Over a year ago we wrote :-

“So, with rocketing costs, astronomically late, and now the subject of another vindictive attack on the UK by the EU Commission, the Galileo project in many ways represents a microcosm of the entire Brexit process so far.”

To that comment we can now add: “And the EU’s system is unusable.”

This kind of research takes a long time for several people on the team. If you can help to fund us to continue, a choice of quick and secure donation methods are below. We rely 100% on the generosity and support of people like you. Without you we can't carry on. Thank you.

[ Sources: EU Commission | EU Legal Docs | European Space Agency | European Global Navigation Satellite Systems Agency | DExEU | Plus dozens of other official sources as well as information from scientists working on the project ] Politicians and journalists can contact us for details, as ever.

Why is the UK Government still paying towards Galileo when the Commission has clearly stated we are no longer part of the project, after an input over £1bn of the costs.
What was its purpose, a grand vision to be in competition and cover for the loss of GNSS [GPS] signals.
Just as well SatNav still relies on GPS.

I too am puzzled why we are still paying for Galileo when we are told we won't be able to fully utilise it. Maybe they know something we don't, such as the UK is not leaving?
Anyway, you do all realise the business case for Galileo was built upon road charging ?
The economic case for Galileo was based mostly on enabling pay-per-mile (OK pay per km) charging for road use. They need this more than ever with electric vehicles replacing fossil fuel vehicles in a few short years time. They need to replace fuel tax income with another tax, i.e. road charging.
So I for one am pleased that it is so late.

How many members of the Public know about Galileo and European Geostationary Navigation Overlay Service (EGNOS) and plans for road tolling? A minute percentage I would guess.

Like to know how the EU Army could use this technology of Satellite navigation to target missiles, move whole brigades across continents against an EU-decided 'target'. And as we are banned from accessing it, even though we are still a major payer, where is the sense in any further input from us? We should withdraw now. There is no 'sharing' between the EU and Britain; never has been, never will.

Sydney: I guess this could be why we are still paying for Galileo. UK will probably be allowed to use the road tolling function as long as we pay for it.
UK gov will pay whatever it takes to bring in road tolling and pass the cost onto the motorist.
We are being farmed by an elite. They're only on your side as far as a farmer would be on the side of his livestock.