If Corbyn wins - and by less than 4% - should Boris demand a “People’s Vote”?

Brexit Facts4EU.Org contrasts the EU Referendum result with the General Election on Thursday 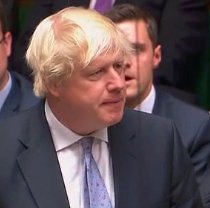 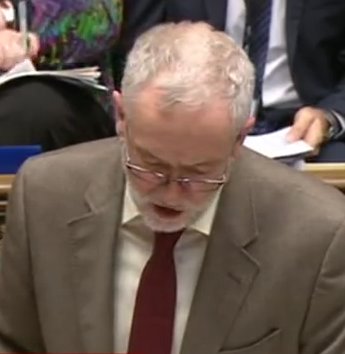 When is a massive vote by the British people actually valid?

It is official Labour policy to re-negotiate the Withdrawal Agreement and Political Declaration, and to tie the UK much more closely to the EU. They will then hold another Referendum, with the options being their re-negotiated de facto Remain agreement versus remaining in the EU as at present. There will be no ‘Leave’ option on the ballot paper.

Below we have analysed the raw data from the Electoral Commission to bring readers some surprising facts about democracy in the United Kingdom.

The EU Referendum versus the last general election 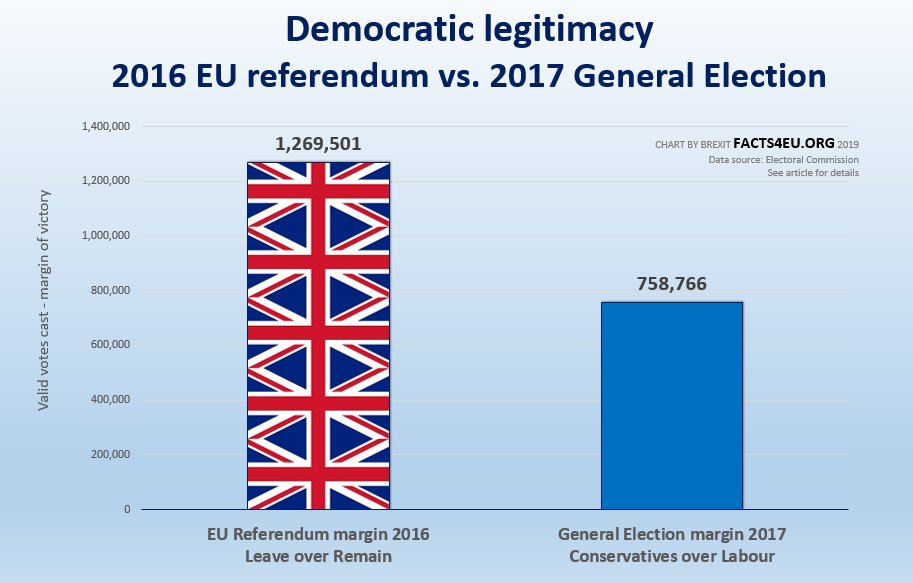 If Jeremy Corbyn wins by 3.8% or less, should Boris Johnson demand a “People’s Vote”?

One of two men will lead a United Kingdom government after Thursday’s general election: Boris Johnson or Jeremy Corbyn.

In either case the result could mean that they win enough seats to lead a majority government, or be forced to put together either a formal coalition or a “confidence and supply” arrangement with another party or parties. A third option is to attempt to govern with a minority in Parliament, but as the largest party.

Putting aside the politics, at what point does the margin of victory become a cause for re-running the vote?

Whatever the result on Thursday, it is worth asking questions in advance about the possible result

In the 2017 election Theresa May’s Conservative party received just ¾ million more votes than Labour. This represented a margin of just 2.35%.

In the 2016 EU Referendum, the margin between Leave and Remain was much higher. Leave won by over 1.25 million votes. That’s a margin of 3.8% and it’s a full 67% greater than the margin achieved by Theresa May which allowed her to govern the country.

Which decision of the British people had more legitimacy?

Elections versus the EU Referendum

Yes, of course we understand the differences between a binary choice referendum and a multiple choice general election, but the point about democracy is still valid.

Remainers might just want to reflect on the fact that a general election usually results in Her Majesty’s Government facing Her Majesty’s Official Opposition, so in a sense the outcome is usually binary.

Remainers might also try to argue that a government is for five years whereas a referendum decision to leave the EU is for life, but they have rather shot themselves in the foot on that argument.

They have refused to respect the result of the largest democratic vote in British history. By their own admission they now wish to have another referendum, so the EU Referendum was not a ‘once in a generation’ decision in their eyes.

The post-democratic revival and evolution

Great Britain led the World with the industrial revolution. The United Kingdom Parliament is still referred to as “the mother of all parliaments”.

Perhaps the EU Referendum was the start of the worldwide post-democratic revival. If this is to be the case then the fight to regain our democratic rights from those who would trample all over them has only just begun.

Judging from this general election we still have a long road ahead of us.

Please help us to keep going, with a donation. Quick and secure donation methods are below this article. Thank you.

[ Sources: The Electoral Commission ] Politicians and journalists can contact us for details, as ever.

'If this is to be the case then the fight to regain our democratic rights from those who would trample all over them has only just begun.'
-
Thank you. It is good to hear the long term view.
-
Sadly, the vast majority of the Nation still remains asleep. Will the public ever learn that if they continue to support the mainstream parties and status quo then little will change? 'You get what you deserve' comes to mind - ossification.
-
A new radicalism is needed; challenge and debate need to be kept alive; change and new ideas born. It is much easier to achieve change in a small community than a large one. Large organisations of people such as the EU become self-satisfied, corrupt, undemocratic and sclerotic over time - progress always at the lowest common denominator. Globalisation will be the end of democracy and civilisation as we know it. Strengthening democracy within small units (nation states, and further devolution) and strong variation between people's and cultures is a far healthier way to evolve. Darwin would approve.

James Bertram (1) "A new radicalism is needed" - indeed, presently the only radicalism is the violence of the left and 'momentum' who are emboldened by the lack of justice in the country. Everything is biased against the white, Christian, law-abiding citizen. The media is corrupted. Politics is totally corrupted. If the country doesn't wake up England will be finished very soon.

2 Deeply annoyed, yes I agree 100% my family and I, and many of our friends think the same way-disgusted with all that has happened these past tree years-traiterousness from every political direction- for me it has to be a complete break from the EU-no more money being deposited into the shark like mouth of the EU. They will have to learn to survive without the UK- for too long we havd had to few deciding much for so many.

Another thought I keep coming back to is this idea. Make compulsory voting with a fine of 100 pounds for refusal. I would introduce ID cards with photo. Then when you voted you have to show ID, driving license or passport.
I used to thing everything needs reform like Nigel Farage says. However, I believe compulsory voting would fix many things including the very low voting percentages.
Anyway with general disability unable to get to their nearest booth would be allowed a pista vote.

Anyway with general disability unable to get to their nearest booth would be allowed a pista vote.
Of course I meant Anyone with general........
I also think compulsory voting gives more democratic and fair results.

Oh dear my computer is making corrections for me today: .......it should have wrote 'would be allowed a postal vote'.

Sad to say - our next door neighbour is a kind and thoughtful man. He is not conventionally ''well educated'' but he is better read than most who went to ''yooni'' and is concerned about the environment and the comfort of his fellows. Yet he told me he ''never votes, never has''. He says he thinks that nothing will change no matter what opinion he expresses. When I asked him about the idea of having a Marxist government, his response was ''I don't want THEM to get in'' without acknowledging that his vote could make a difference.
It seems that there are many truly decent folk who will never be convinced that their vote counts, and that must be a huge number. How very very sad.

Comment 3 - You say ''England'' and that's very telling. I think the Scots, N Irish and the Welsh are vocal about unfairness to their ''countries''. Good for them. We in England have just lain back and been far too complacent about our place in the scheme of things.
Comment 4 - Yes. Why not? People have died for this right. They should not be allowed to ''dip out'' just because they can't be bothered.

Comment 8 L Jones. Actually I didn't mention England or Scotland in my comment 3- I did mention the EU however. I was replying to Deeply Annoyed comment 2.

Too true Facts4EU, Remainers are about to have the tables turned on them. The tables will be turned on whoever gets in, because anyone can now demand another Election .... and another ... and yet another! Once attacks on Democracy are attempted, the perpetrators receive in larger doses the same arguments hurled back at them. Where are we heading? Chaos. I have learned not to succumb to all the 'sweet talk' at pre-Election time. They are so predictable, offering us, no longer a gullible Jo Public, what they know we want to hear. Such an example is PM Boris Johnson promising he'll get Brexit done (his way). And why has he not increased NHS funding in the North before now, rather than use it at Election time? It's all 'Poppycock'! If Boris Johnson truly intends overseeing a quick Brexit, why has he not even mentioned tearing up his 'Deal', which still ties us in to the EU? Boris, and the Tories, are avoiding telling us the whole truth, and nothing but the truth, on the majorly imperative issue, Brexit . That would have secured my vote but, as he hasn't, he's not to be trusted. I will be spoiling my ballot paper - no suitable Brexit Candidate in my Constituency. Like Nigel Farage, I cannot stomach voting Conservative. Mine, and all the other spoiled papers, will be counted as a measure of our strong discontent. .