EU paves the way for another Brexit delay, despite Boris’s promises

“I am very worried about the little time we have,” says EU Commission President 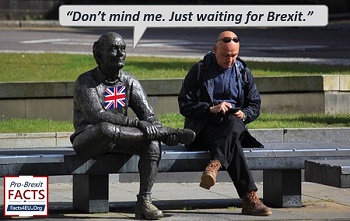 The new EU Commission President Ursula von der Leyen gave two media interviews published yesterday in which she made it clear that the EU wants to delay the UK’s departure from the bloc at the end of next year.

“I am very worried about the little time we have. It is not just about negotiating a free trade agreement, but many other issues.

“It seems to me that on both sides we should seriously ask ourselves if all these negotiations are possible in such a short time. I think it would be reasonable to take stock mid-year and, if necessary, to agree on an extension of the transition period.”

The EU plans to erect barriers for UK business

Asked by the French journalist if it should be made difficult for the UK to access the Single Market after 2020, Frau von der Leyen stated:

“If we want to benefit from the prosperity of the Single Market, to access it without barriers or customs duties, we must all accept its common principles and values. Otherwise, the two parties must agree on the barriers to be put in place.”

The EU Commission President also gave an interview to German magazine Der Spiegel which was published yesterday, and which carries the following headline :-

“The Brexit drama is a bitter lesson for the populists”

“After all, it is not only trade policy that is at stake but also security issues or fishing rights, to name just a few examples,” said Frau von der Leyen.

“That is why we want to start by talking about those issues where, without an agreement, the greatest damage is likely to be done, because there are no international rules that would take effect in the event of a hard Brexit,” she continued.

By giving two interviews to major publications in France and Germany on the same day, the EU Commission President ensured that her message would be heard loud and clear in London.

Short of Frau von der Leyen popping over the Channel to give an interview to the europhile elements of the British media such as the Financial Times and the BBC, or perhaps posting a YouTube video of her yodelling “There on a hill stood a lonely goat-herd”, the Commission President could hardly have done more to trumpet the message from the EU. 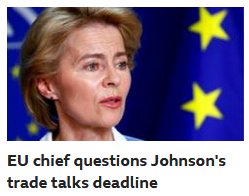 Naturally this was one story about the EU which the BBC was delighted to report on the front page of its UK News website.

The EU is planning to delay Brexit – again

If the EU were serious about negotiating a trade deal with the UK, it would be ready to start talks on 01 February next year (2020) – the day after the UK exits the EU in name only. After all, if time really is short (and it is) then any organisation with benevolent intent would be fully prepared and raring to go.

The truth of course is that the EU should have already been negotiating trading arrangements with the UK for the last three-and-a-half-years, but that’s another story.

The current information coming out of Brussels suggests that the EU will not be able to start talks until March – just three months before the decision needs to be made on whether or not to extend the scheduled departure of the United Kingdom from the European Union on 31 December next year. This decision must be made by 30 June 2020, according to the Withdrawal Agreement which will be passed into law in the first days of the New Year.

Let’s start fighting back against the EU’s propaganda

It is our view that the Prime Minister should give an interview to major EU27 media organisations the moment he arrives back from his Caribbean holiday. In it he should make absolutely clear that there will be no extension.

This will be the legal position if the Withdrawal Agreement Bill passes as expected. However as we have constantly argued for almost four years, the Government must begin fighting back in the EU’s propaganda war.

As a starter, we suggest that the UK’s negotiating team should invite Michel Barnier to London for the start of talks on Saturday 01 February 2020. Photos of the UK team sitting on one side of the table should be made available to the world’s media, showing empty chairs for Monsieur Barnier and colleagues.

This fight is not yet over

If you’re a regular reader and haven’t yet donated to us, we ask you to consider doing so now. This fight is not yet over. It would be a great shame if we had to shut up shop at this important juncture. Quick and secure donation methods are below. Thank you.

[ Sources: Les Echos | Der Spiegel ] Politicians and journalists can contact us for details, as ever.

This was to be expected. After all they listen into all our govenment's discussions in one way or another. I hope that Boris's government realizes now that the EU is not a friend but an enemy out to destroy any country who wishes to leave.

happy new year EU, your loss is our gain and we look forward to a prosperous new year.It would seem that the boot is now on the other foot, time for Boris to do some kicking

Thank you for another important piece.
(i) If the EU does not start negotiations in February, then one is justified in claiming the EU is not using its best endeavours to conclude an agreement by end 2020.
(ii) Mrs von der Leyen talking out of the top of her hat again, re "issues.. where there are no independent rules" - it appears she includes fishing in that? Codswallop.

High Noon has arrived even before the WA has been ratified. Are they testing Boris;s metal or just showing the Brussels team have no intention of negotiating a trade deal other than on their terms. They still want the money, so when will the gunfight at the OK corral showdown take place. Still time to reject the WA, withdraw the Bill and leave without a deal.

Sydney Ashurst: Unless Boris is playing a fantastic game of bluff, leaving without any sort of deal on 31st January is not going to happen. I'd like it if he were to abandon the WA&PD, take control and offer the EU a continuation of current trading arrangements under Article XXIV of GATT, pending agreement of an FTA and I suspect he would have much support for such action. Of course the noisy minority would be outraged..... :)

It is perhaps fortunate that the EU has so many problems to deal with next year. It also has new priorities – none of which were voted on by the EU’s 512 million people of course. The number one topic in Brussels these days is EU Commission President Ursula von der Leyen’s “European Green Deal”.
This ‘climate change’ policy is dominating everything and it’s surprising that this has been given scant attention in the British media. As with all matters EU this new policy has already run into trouble. The only way in which the EU Council reached any kind of consensus on this, earlier this month, was by excluding Poland at the last minute.
How much will this piece of inexact political science cost the UK whilst still in transition?
Reminds one of Blackadder and Baldrick's cunning plan.
Is it the German appointee Von der leyen's clever scheme to recoup part of the cost of Germany's Energiewende. Energy minister, Peter Altmaier, in 2013 explained that legal commitments to support renewable energy alone would add up to about 680 billion euros by 2022, and that the costs of grid extension, back-up power generation capacities, research & development, electric mobility, and the modernisation of buildings would have to be added to this figure. The German government said, in early 2018, that the total costs of the Energiewende are unknown. Germany’s Federal Court of Auditors (BRH) has repeatedly criticised the government for failing to come up with an overview of expenses associated with the Energiewende.
With shared green deal costs, the few make the money and the many pay the bill.
German Industry should be well positioned to gain contracts.

Off-topic but related.
Interesting article worthy of keeping an eye on at:
https://www.express.co.uk/n...
Where the first part of the article states (copy and paste):
"URSULA von der Leyen, the President of the European Commission, has been forced to defend herself after a mobile phone which is at the centre of a political scandal which has engulfed Germany’s defence ministry was wiped of all data."
"Mrs von der Leyen, Germany’s former defence minister and a close ally of Chancellor Angela Merkel, only took up her new post at the Commission at the start of the month. She insisted she has nothing to hide - but she is nevertheless being investigated by a German parliamentary committee, to whom she is scheduled to give evidence next month."
(All Credits to Daily Express)

If she's convicted of corruption she'll be in good company at the highest levels of the EU, as Christine Lagarde the President of the ECB has a conviction for 'negligence', a polite term for corruption. Josep Borrell the High Representative for Foreign Affairs and Security Policy has a conviction for insider trading and Charles Michel the President of the EU Council lost his last job after losing a vote of no confidence.

What a load of cobblers “I am very worried about the little time we have,” says EU Commission President. 4 years after the UK's most historic democratic referendum vote!!
What a total joke, a sick one on the UK's indigenous.