The sheer, unbridled nonsense of the EU’s “trade deals” - debunked

And most of the remaining 1% will continue much as usual 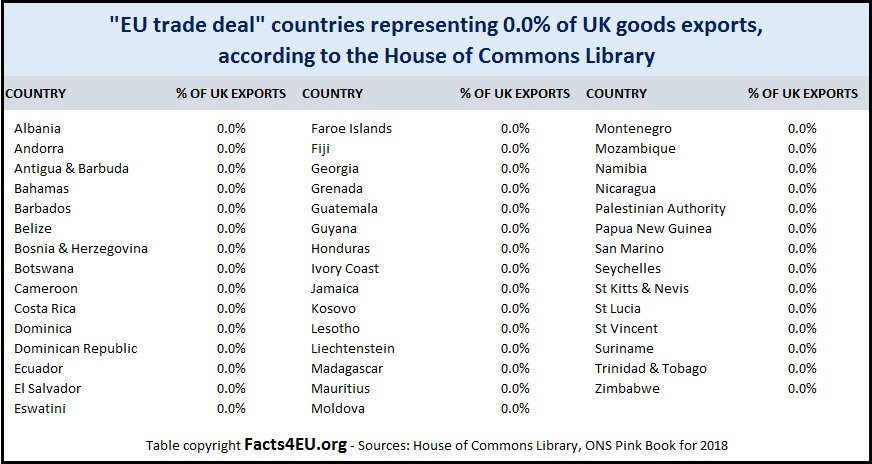 The EU Commission’s performance on trade has been lamentable

The EU Commission has the sole right to negotiate trade deals for the UK, until the UK technically leaves on 31 January next year (2020). The Commission’s performance in this over the decades has been lamentable.

The stark reality is that the EU has been unable to negotiate trade deals with the USA (even under former Europhile President Barack Obama) nor with China. And its recent trade deals with Canada and Japan have still not been ratified.

As we have reported in detail before, the majority of the EU’s “trade deals” are in fact various forms of “Association Agreements” which contain large elements having nothing to do with trade. Many involve large subsidies to the countries involved, to persuade them to join the EU. These include the six Balkan counties including Kosovo – a state not even recognised by the UN as a country.

Many of the other “EU trade deals” are with countries so small that they do not even rank above 0.0% in the Dept of International Trade’s list of countries to which the UK exports.

44 out of the 70 countries on the EU’s list of “trade deals” show as representing 0.0% of UK exports. There are only three countries ranking above 1% of total UK goods exports with which arrangements still have to be made.

Remainer MPs and campaigners continue to bring up their claim that the UK will suffer after Brexit, as a result of having no access to the EU’s negotiated trade deals. Our research report above shows that this is based on ignorance.

The vast majority of countries with which the EU has some form of trade deal (and most are not simple trade deals but rather political deals) each represent 0.0% of the UK’s exports. The effect that most of these “deals” have on the British economy is negligible.

The Dept for International Trade (DIT) has already negotiated trade agreements with 50 countries with whom the EU has some form of arrangement. Negotiations are ongoing with a further 20 countries, most of which are very small.

We understand why the DIT have done what they have done, but the simple fact is that these deals represent a tiny fraction of the benefit to the UK once it is able to trade globally and freely, unencumbered by the EU’s straitjacket on trading worldwide.

We could produce one of our famous “one-pager” factsheets on this, if readers think it would be helpful?

Finally, thank you to readers who donated yesterday to keep us fighting to ensure a true Brexit. We badly need more contributions if we are to continue the fight. Quick and secure donation methods are below this article. Thank you.

[ Sources: ONS Pink Book for 2018 | HoC Library | DIT ] Politicians and journalists can contact us for details, as ever.

Astonishing. I read the other day that a UK trader included in the statistics as 'trading with the EU' was included because she had once bought a piece of US software through an Irish company.
With apologies for being late, in yesterday's comments, some were wondering if the withdrawal agreement was any different to Mrs May's earlier edition. Facts4EU did its usual cracking pieces on the new WA. But I thought I'd just post that, in Boris' WA, up to the Northern Ireland protocol, the text is identical, bar two tiny changes (not significant, as I remember). The Northern Ireland protocol is different, and effectively hives off NI into a separate entity, half in the UK.

Will the demands of the EU in trade negotiations tie the UK too strongly to Brussels rules and the ECJ.
Regulatory alignment and the level playing field arguments are for the EU's benefit, restricting competition.
It is easy to see what the rest of Europe is worried about. Operating a high-tax, high-spending economic model is a lot easier when you don’t have to worry about anyone competing with you. If necessary, you can protect yourself with tariffs,
What Macron refers to as “tax dumping”, for example, simply means another country choosing to have lower taxes than France, which, lets not forget, happens to have the highest taxes in the OECD. Just because one country decided to have incredibly high taxes it doesn’t mean everyone else has to do the same. The last time France had a balanced budget was in 1980, and since 1974 it has never generated a surplus. Public debt reached 97% of GDP and the economy has been stagnating for two decades. Unemployment stands at 9.2% (with 20.4% youth unemployment ) and in 2017 it still had a current account deficit of 6.5 billion euros while the Eurozone has a surplus.
Ireland has a corporate tax of 12.5% ​​and a rate of 6.25% on income from patents and intellectual property, a key factor to attract technology companies. Its minimum salary is almost double that of Spain, Portugal, and other Eurozone countries, the average pension is higher as well and its health and education systems are of the highest quality.
Macron is calling for a harmonization of the tax systems in Europe, and wants to keep the UK in it.

Now that Boris Johnson is 'King of the Castle' with an eighty seat majority (Germany and France can only dream of) attitudes in Europe are changing.
In 2016 Michel Barnier, the EU’s Brexit negotiator, told Brussels leaders: ‘I’ll have done my job if, in the end, the deal is so tough on the British that they’d prefer to stay in the EU.’
On the day Britain leaves, it becomes the EU’s single biggest export destination. Both sides need the other to prosper. Many EU businesses would fail without the UK trade, or illegal subsidies.
Leo Varadkar, the Irish leader, says: ‘I think the prospect is there to develop a new future economic partnership between the EU and the UK, one that is going to be mighty and one that is going to be good for all of us.’ He admits to knowing 'which side his bread is buttered on'. He could still face 'a no deal' outcome.
In Brussels, too, there is a very different mood. Charles Michel, who heads the European Council, looks forward to concluding a deal with the UK ‘as soon as possible’.

Just goes to show the farce of the last 4 years in particular. It also vividly that the remoaners are equivalent to a fifth column working in lock-step eith the EU ever dince the referendum result.
A really shameful period in our history.

On the other hand, Jennifer Ranken in The Guardian is reporting that the EU are considering asking for an extension of the transition very soon