VIDEO: ‘What can you do with a President, when he stops being EU President?’ 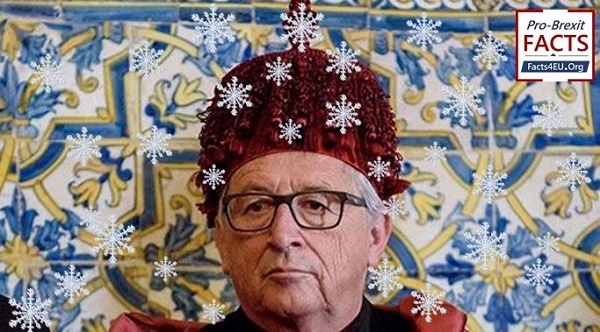 A Brexit Facts4EU.Org, fun, “White Christmas” look at a ghost of Christmas past

This evening Jean-Claude Juncker will be sitting down for his first Christmas dinner in 24 years in which he has been neither a prime minister of Luxembourg, nor a president of the EU Commission. (Christmas in Luxembourg is celebrated on 06 December with children’s presents and the grand dinner is usually on 24 December.)

To add to his misery, when Herr Juncker looks at the official EU register of presents he has received this year, they number just four.

Gifts declared by Jean-Claude Juncker in 2019

The Christian spirit of forgiveness, from the Brexit Facts4EU.Org team

The Brexit Facts4EU.Org team therefore felt that in the Christian spirit and at this time of forgiveness we should offer our gift of a little song. Being penniless after four years of fighting for Brexit, we borrowed the music and most of the lyrics from the traditional Christmas film, “White Christmas”.

We invite readers to sing along to our revised lyrics below, whilst watching the video of the late, great Bing Crosby below that.

“What can you do with an [EU] president, when he stops being a president?”

With apologies to the late, great, Irving Berlin

When the war was over, why, there were jobs galore

For the Brexit Warriors, who were in the war

But for presidents things were not so grand

And it's not so hard to understand

What can you do with a president

When he stops being a president?

Oh, what can you do with a president who retires?

Who's got a job for a president

When he stops being EU president?

They all get a job but a president no one hires

They filled his chest with medals, when he praised the Treaty of Rome

And they spread the blue-gold carpet, when he came marching home

The next day someone hollers, when he comes into view

“Here comes the president” and they all say “President who?”

They're delighted that he came

But they can't recall his name

Nobody thinks of assigning him

When they stop wining and dining him

It seems this superstate never has enjoyed

We will be publishing tomorrow (Christmas Day), as we have done 365 days a year since before the EU Referendum campaign, but many readers will be thinking of things other than Brexit.

We would therefore like to take the opportunity to wish all our readers a very merry Christmas, full of joy, laughter, and love.

Sincere best wishes to you all,
Kind regards,
The Brexit Facts4EU.Org team

P.S. As ever, quick and secure donation methods are below, in case there are readers who have enjoyed our work this year and who still have a morcel left in their Christmas present fund.... :-)

[ Sources: EU Commission | Irving Berlin and the film "White Christmas" ] Politicians and journalists can contact us for details, as ever.

Chuckle, Merry Christmas.
Thank you for the fantastic job you have done over the last 1000 plus days.
All the best
Bill

I will second that happy Chirstmas to all of you who are involved as you are doing a fantastic job of publishing important facts.

Well Donald Tusk stepped from being President of the EU Council to President of the European Peoples Party after his recent 'election'. Nice for Donald and I'm sure that the Euro-Establishment will find something for Juncker in due course. After all, Barnier has been a Commissar twice and Vice-President of the EPP so all these old federalists get recycled in one way or another! Happy Christmas! :)

Yes indeed Facts4U, you have been and still are a really great leveller of the monkey business that spills out of the European Union HQ Brussels. With your help we are on the way to leaving the EU-not Europe as such but just the monolith of socialism that presently resides in Brussels. Have a great Christmas day and raise a glass or two to yoursleves. Well deserved.

Merry Christmas to all at Facts4EU. You have done a fantastic job, thank you so much.

On behalf of Remainers, we wish your facts would go away!

Thank you all at Facts4 EU you have served us proud with new information daily .merry Xmas best wishes to you all .