STOP THE ROT, SACK THE LOT

Yesterday 10 ministers voted against Government policy and their manifesto 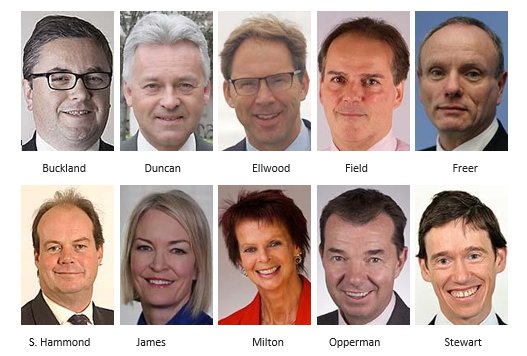 They should all be fired today

Some of the Brexit Facts4EU.Org team have significant experience being on the Boards of companies. If any director had said they would like the competition to win the largest contract in the company’s history, they would have been fired.

Why isn’t Mrs May firing the following 10 ministers?

Who voted for what?

Below we list what these Government ministers voted for - against Government policy, against the party manifesto on which they stood, and against the wishes of the majority of the members of their party.

Voted for a Customs Union:

Voted for a second referendum:

The Chancellor, Philip Hammond, did not vote against one single one of these Remain motions, despite them all being against Government policy.

Free votes for ministers simply should not be allowed

It really doesn’t matter if Theresa May gave a free vote or not. The principle of Cabinet responsibility is an age-old tradition, otherwise government can’t function. In breaking this rule the PM is inviting chaos, and that is what she has achieved.

Let’s be frank, this Prime Minister has presided over the worst breakdown in the United Kingdom’s constitutional norms and traditions in living memory. Her gross incompetence and her preference for the malicious influence of unelected civil servants has resulted in a humiliation for the entire country.

The world is looking on aghast at what the ‘Mother of all Parliaments’ has become.

Tory MPs must move against her immediately. She is a total disaster for the country, to say nothing of the Conservative Party.

If you can help us with a donation - £5, £50, £500, or £5,000 - we need everything we can get. We do NOT have expensive London offices, nor secretaries, nor expense accounts. We simply produce essential facts based on research of official EU and UK Government sources, and lobby hard with MPs and other Brexit groups to ensure a clean Brexit.

If you could possibly help, the quick and secure donation options are below.

Whichever way anyone voted in the 2016 Referendum or indeed in the 2017 General Election it is now quite obvious that the majority of politicians of both the sides have been thoroughly, deeply fraudulently dishonest and continue to lie to deceive us on an industrial scale.
This shameful Parliament is no longer fit for purpose - sack them, sack them all.

"Why isn’t Mrs May firing the following 10 ministers?" She is unable to! If she did her useless government would collapse taking with it the few Conservatives that are good people.
She is as Ann Widdlecombe has said: "the worst PM since Eden", and we have had some shockers in between have we not!
Thanks to May, the world looks on at the mother of parliaments and laughs.

Corbyn said: On a point of order, it is disappointing that no solution has won a majority this evening but I remind the House that the prime minister’s unacceptable deal has been overwhelmingly rejected three times.
He is dodging the real issue when he says: that the House can succeed where the prime minister has failed; in presenting a credible economic relationship with Europe for the future that prevents us crashing out with no deal.
Progress to Customs Union or Common Market Plan 2.0 can only be made through the Political Declaration after first signing the Withdrawal Agreement (Prime Ministers deal).

Time to cut the crap and give MP's a straight choice of WTO Brexit or revoke A50. Some may vote to revoke, but at least we will get a ready made deselection list and live to try again with a more democratic Parliament.

I cannot believe you said that Fidget!! To revoke Article 50 would be the ultimate travesty and the straw that broke the camel's back. It would provoke serious civil unrest and probably anarchy. Leaving on WTO terms is what 17.4 million people PRAY for: it would deliver us from evil, release us from the shackles of an imploding, corrupt, sclerotic and dysfunctional dictatorship and restore freedom, independence and sovereignty.
Only when we are free will we be able to deal effectively with the traitorous vermin in Parliament.
PLEASE, seek counselling at the earliest opportunity!

Our Parasite Political class of all 3 parties including SNP Greens etc are breaking the law under the UN charter We have a right to self determination all the parasite Remoaner mp's need deselecting and barred from standing again and will the Brexiteer MP's grow a pair of balls and rid us and them of Mother Theresa and Her s**t shower of a Government along with the IRA's friend Corbyn eutruth.org.uk